>I have been so blessed to be able to be a work-at-home mom. Sure, there are days I find myself dreaming of having a few uninterrupted hours to myself just to read, or veg in front of the TV, or even have a nice nap. But, when it all comes down to it, I wouldn’t trade the time I get to spend with my daughter for anything.

I love that I’ve had the opportunity to watch her change from a tiny narcoleptic newborn, to an alert infant, and now to a very busy toddler. I love just being able to observe her, to watch how she moves, how she plays, how she learns about the world around her. I have to admit, it’s sometimes very hard to get work done with her around. I’ve got unlimited and uncensored access to something that is far more entertaining than anything you’re going to find on TV. She makes me laugh at least a dozen times a day, and laughter is good for the soul.

For instance, we sat down to dinner tonight, Steven and I with bowls of spaghetti, and Cadence with some macaroni and spaghetti sauce, green beans, and cheese. About halfway through our meal, Cadence seemed to notice that my pasta was different than hers.

“Mah mah mah,” she said, pointing to my bowl.

I picked up half a dozen strings of spaghetti and dropped them on her tray. Delighted, she immediately began her rigorous inspection. She picked up one strand and held it up in front of her. She waved her hand back and forth and watched the spaghetti flop against her fingers. She gave it a quick taste, brushing it lightly against her tongue, and then smacking her lips loudly. Satisfied with the flavor, she looked at it for a moment, then put one end in her mouth and let go. Her eyes widened a little when she felt the cold noodle fall against her chin. She paused for a moment, then began to shake her head from side to side, giggling as the noodle slapped against one cheek and then the other.

Once her experiments were over, Cadence resumed eating dinner.

A few moments later, I watched as she ever so slowly picked a spaghetti noodle up from her tray, raised her arm, and placed it gingerly on top of her head. She picked up a second noodle and placed it carefully on top of the first. She held her arm up for a second, as if making sure the noodles were secure, and then she continued to eat the rest of the food on her tray, pausing only to take a few drinks of water from her sippy cup.

It’s moments like these that I wonder just what exactly is going on in that little brain of hers. Was she trying to be funny? Was I witnessing the emergence of her own unique sense of humor? Did she think the spaghetti belonged on her head because it sort of resembles hair? Was she trying to save a few pieces in case she got hungry later?

Whatever the reason, Cadence seemed satisfied, and while I’m left to ponder the meaning of it, she’s already moved on to her next adventure.

Today’s 365 Project entry is dedicated to my little Spaghetti Head, and to all the crazy things kids do that keep us grownups scratching our heads and looking for reasons. 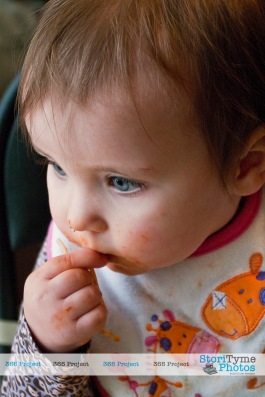 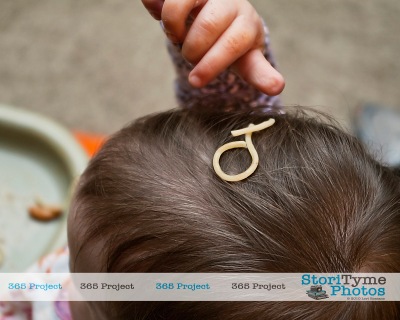