>I’ve never really been comfortable in front of the camera. There are plenty of cute photos of me as a baby and a small child. Back then, I never really noticed the camera or the person snapping the photos. I guess I was just too caught up in whatever it was that I was doing at the moment to really care. At that age, being photographed was a game. Like Pavlov’s dog, someone would cry, “Say cheese!” and I couldn’t help but to turn toward them a flash a smile.

As I got older, that all began to change. Perhaps it was the first signs of shyness creeping in. I’ve never been what you would call a “social butterfly”. There was something about seeing the camera turned on me that just made me extremely uncomfortable, and my Fight or Flight Response suddenly kicked in.
My first instinct was to wage war against the photographers, guessing that they might stop wasting their time (and their expensive film) if I managed to ruin their photos. This one, taken in 1988 is typical of the time period when making ugly faces at the camera was my primary M.O.

Needless to say, neither Mom nor Grandma were particularly happy with my Easter photos that year.
Unfortunately, it wasn’t long before people began to notice a pattern, and refused to actually snap the photos until they could be certain I wasn’t making a face. Suddenly faced with a formidable and downright unbeatable opponent, I did the only other thing I could…I ran.
For me, the 90’s was a decade of photos in motion. I tried to move fast enough to avoid being caught on film altogether. Many of the photos of me from that period were taken using the element of surprise, so the results often looked something like this: 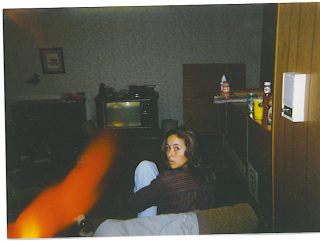 When the photo ops were unavoidable–holidays, school events, class photos–I tried to suck it up and deal with it the best that I could. I tried to smile without looking cheesy, and I just prayed that my eyes weren’t half-closed or t﻿hat I wasn’t making a goofy face to make me stand out in the picture. I did my best to just try and blend in.
These days, I get complaints from my family and friends. They say that they don’t have enough photos of me. It’s true. I like to hide behind the camera. I’m much more comfortable there. I like to be the one doing the picture-taking and not the other way around. So, today, I challenged myself to step out from behind the camera for a moment, and to turn it on myself.
I set up my tripod, focused my camera the best that I could, and pressed the timer. As I listened to the beeps counting down, I tried to make myself look as natural as I could. Beep…beep…I smiled. Too big. That might look goofy. I took a breath and tried to smile more subtley. Beep…beep…I blinked, and wiped away the stray eyelash that was making my eye tear. Beep…beep…I brushed my hair away from my face, and concentrated on smiling again. Beep-beep…beep-beep…beep-beep…click.
﻿

Eh…it’s definitely not my worst photo ever, but I think I’ll get back behind the camera now.
Today’s 365 Project ﻿is dedicated to all the other photophobics out there. You’re not alone.