Flying with children should be an Olympic sport. Or at least a professional sport where the salary truly reflects the time and effort and skill it takes to pack, transport luggage, and entertain a toddler in a cramped, confined space with limited entertainment and no comfortable way of napping. If somehow you make it to your destination and back home again without any permanent emotional or psychological damage, you have earned a well-respected spot in the Family Vacation Hall of Fame.

So far, I have been really lucky traveling with Cadence. She has been on over half a dozen flights and has only had one official meltdown. It was August in Arizona and we were one of the first to board the plane. With the temperature outside nearing 115, the inside of the plane was a sauna. Cadence’s frustrated whining became an all out scream of rage about the time she began to sweat, and continued until we finally began taxiing for take off and the pilot turned on the air conditioning. Other than that incident, she has been good as gold.
The worst part about flying with such a small child is the amount of crap you have to take with you. My entire week’s wardrobe and toiletries are shoved into approximately 1/3 of the suitcase. Cadence, on the other hand, occupies 2/3 of the suitcase, an entire backpack, and every pocket in my jeans. Barely a year old and she already overpacks! She’s got to have regular diapers, overnight diapers, baby wipes, a spare container of wipes, teething rings, teething gel, teething tablets, gas drops, two bottles of milk, a sippy cup, two plastic spoons, several bibs, her baby doll, three books, a stack of onesies, several pairs of pants and shorts, two blankets, two pairs of shoes, a week’s worth of socks, some crayons and paper, a pacifier (not to actually suck on, just to play with), lotion, diaper rash cream, sunblock, a hat, two jackets, several toys and games to keep her busy, and a large assortment of snacks. We needed a packmule and an assistant just to get out of the house on time. Making it through airport security in one piece was a damn miracle!
My one request to Cadence as we boarded the flight today was to please, please, please not poop her diaper during the flight, but the fact that she hadn’t had a dirty diaper yet that day wasn’t such a good sign. Lo and behold, about halfway through the flight, she started grunting and groaning and turning a little red in the face–all tell-tale signs of the impending disaster. I waited just long enough to make sure she was finished, and then headed to the lavatory for a fresh diaper before we managed to asphyxiate the rest of the passengers with the stench.
Whoever designed airplane bathrooms should be forced to live in one for the rest of his/her life, or dropped out of the plane midflight without a parachute. Even when I am just traveling alone, I do everything I can to avoid having to use the restrooms on the flight. I am not usually a germophobe or claustrophbobic, but airplane bathrooms can bring out those traits in anyone. After wiping everything down with several baby wipes and the covering every inch of the tiny cubicle bathroom with a layer of fresh paper towels, I laid Cadence on her changing pad to do away with the her foul-smelling diaper. It only took a minute, but it was long enough for her to cry and fuss and even squeeze out a few crocodile tears for good measure.
Victorious, we emerged and returned to our seats where we enjoyed the rest of our flight into Phoenix. I guess this time, we won the battle. Until next time…
Today’s 365 Project entry is dedicated to all the traveling parents. May the Force be with you. 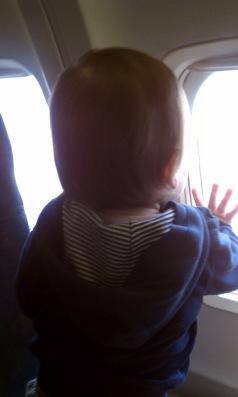 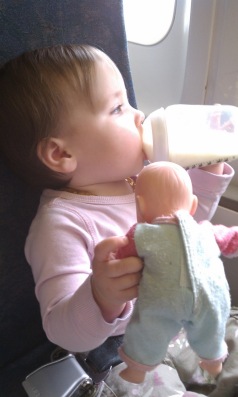