There are few things in this world quite as sad as having a sick baby. It’s just hard when they’re so little. They just can’t quite tell you what’s wrong, and you just can’t quite make them understand what they need to do to get well again. How do you make an active 13-month-old like my daughter understand that getting lots of sleep will actually help her feel better?

Instead of resting, Cadence tried her hardest to go about her normal routine of chasing the dog, rearranging her toys, trying to climb up onto the couch, trying to climb up on Momma to get onto the couch, pulling her books off the shelves and then putting them back on again, throwing her plastic balls across the linoleum floor, chasing them down, throwing them again, and then starting the whole routine over at the beginning after a quick snack and a bottle of milk. The only difference in today’s routine was that every now and then, Cadence would come over to where I was sitting and lay her warm head down in my lap for a few minutes, before jumping back up and heading off to tackle her next project.

I really can’t complain about my daughter’s health. This is only the second time she’s been sick since she was born. The first time was a nasty stomach virus that hit her hard on Christmas Eve and wasn’t officially over until almost New Year’s. We no more than walked into my Mom & Dad’s house after the Christmas Eve candlelight service at church when I heard Cadence’s stomach rumble loudly. The next thing I knew, she was erupting, bright yellow diarrhea oozing out of every inch of diaper. We went through an entire box of wipes, two boxes of diapers, and over three dozen different outfits before it was all over. It was one helluva rough week, but we survived it.

This time, Cadence seems to have caught a good old-fashioned head cold, and I will gladly take the drippy nose over the blown-out diapers any day. I wonder though, if it is actually possible for parents to escape getting sick themselves when they have a child who is sick? Especially a child so young. Cadence has yet to learn how to cover her mouth when she coughs, or to sneeze into a Kleenex. Instead, she just lets it fly, literally. Last night, I was changing her diaper when she sneezed and I watched a glob of mucus fly across the room and hit the wall near the closet six feet away. Had the wall not stopped the momentum, I’m guessing the distance might have been closer to ten or twelve feet. I’m not sure whether I should be grossed out or impressed.

Tonight, as we wound down the evening, the long day of fighting sleep and not feeling good seemed to finally be catching up with my daughter. Steven and I took turns holding her as she tried to decide whether she wanted to finally give up and go to sleep or muster the strength to play just a little longer. We watched as her eyes finally got tired and began to droop. Then, as soon as the pouty lip began to make it’s appearance, it was time to put our sick little girl to bed.

Today’s 365 Project is dedicated to the parents who take such great care of their sick little kiddos. Get well soon! 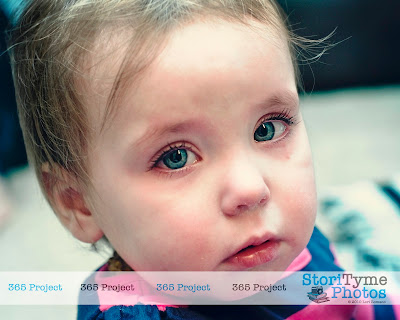 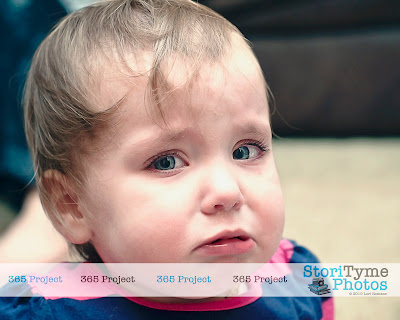