I’ve never really understood people’s obsession with tricking their rides. Personally, I enjoy simplicity when it comes to vehicles. I don’t need a lot of bells and whistles on the cars I drive. My first car (or truck rather) was a 1990 extended cab Ford Ranger pickup. It was light blue and gray and in pretty decent condition until I totaled it just 11 days after I turned 16 and got my driver’s license.

My next, and favorite, car was a 1969 Buick Skylark that my dad talked me into getting to replace my Ranger. I wasn’t sure what to think at first. It was a pea soup green color and had been modified, with bucket seats to replace the original bench seat in the front, and the gear shifter moved from the steering column to the floor. The minute I got behind the wheel for a test drive though, I fell in love. The rebuilt V-8 roared when I pressed down on the gas, and the dual glasspack exhaust let everyone within a 5-mile radius know that I was coming. I nicknamed her the Peacock, and it was a sad day when I had to leave her behind to go to college.

My dad refused to let me drive such a gas guzzler to New York, so he traded me his 1990 Buick Park Avenue instead. The Park Avenue was certainly not in the same class as the Peacock, but she treated me well, and made several long drives from Nebraska to New York and back before I finally returned her to my parents’ house for good. (Stay tuned for a more detailed tribute to the Park Avenue in a future blog post).

These days, I drive a 1999 Dodge Grand Caravan. It’s really Steven’s dream car if you can believe it. He was the oddball in high school that always lusted after a minivan, mainly because he’s a drummer, and always got irritated trying to squeeze his drum set into his tiny Nissan Pulsar to go and play a gig somewhere. After we got married, he mentioned offhandedly to my Dad that he always wanted a minivan, and it wasn’t a month later that Duane was calling to say he found the perfect van. As luck would have it, a huge hailstorm and tornado ripped through Kearney before we’d made up our minds to buy it. Because it received some minor hail damage in the storm, we were able to buy it for just $1000. Best. Deal. Ever. Now we’ve got plenty of room to haul the kid, the dog, the drums, whatever we want. Is it my dream car? No. But I love it just the same, and no shiny rims or painted flames or thumping stereo would make me love it any more.

In the end, it’s all up to the owner how much time and money he wants to put into gussying up his vehicle. My only word of advice is to make sure your ride is worth pimping before you make the investment. I’m not one to judge, but there is just nothing about a Buick LeSabre that screams 22-inch chrome rims.

Today’s 365 Project entry is dedicated to the vehicles we drive. What does your ride say about you? 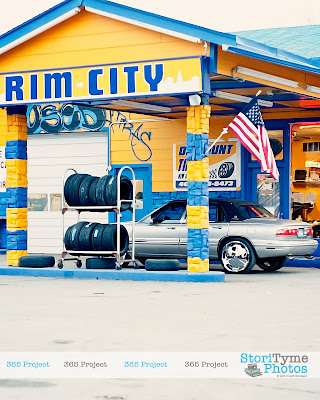