Mucus. Where the hell does it all come from? I think that’s what I hate most about being sick. One minute I’ll just be driving along on my way to run a few errands, or pulling a frying pan out of the cupboard to start dinner, when all of a sudden it’s like someone opened the emergency drainage valve on my sinuses. I scramble frantically for a tissue, a paper towel, my shirt sleeve–anything to keep the floodwaters contained.

I’ll admit, there have been a few times when I’ve been stricken with particularly nasty sinus infections and have gotten so tired of constantly having to wipe my dripping nose that I’ve twisted a Kleenex into something resembling a tootsie roll and stuffed it into my nostril like a plug. Call me gross, but it saved my sanity and kept me from rubbing my nose raw before I got well again.

I also hate the fact that it’s alway my right nostril that seems to take the brunt of the cold. Right now, as I sit here, the left side of my nose is perfectly clear. You wouldn’t even know I was sick. Old Righty though, now that’s a different story. Old Righty is completely clogged and dripping like a leaky faucet. Today alone I’ve worked my way through a half a box of tissues, a dozen paper towels, and a handful of napkins just trying to keep the leak under control.

Worse yet is all the crap that that doesn’t leak out, the crap that hangs out in my sinuses, putting pressure on the backs of my eyeballs until I swear they are going to pop right out of my skull. The crap that slides, every so often, down the back of my throat, making me gag.

I’m not a big believer in taking over-the-counter medications or running to the doctor with every little illness, so I usually end up just letting the cold run it’s course, perhaps with a little help from some natural or homeopathic remedies. I’m always a sucker for chicken soup and hot tea with honey when I have a cold. And this time I even tried a friend’s recommendation of trying garlic to help kick the cold out of my system. I’ll tell ya, crushed garlic and honey doesn’t sound like an award-winning combination, but you’d be surprised at how tasty it actually is. Just brace yourself for a little burn as it goes down and some righteous garlic breath for several hours afterward. I’ll be sure to keep you posted on whether or not it actually works. Until then, I’m off to try and get a little sleep.

Today’s 365 Project entry is dedicated to my good pals at Kimberly-Clark for keeping me supplied with Kleenex. You’re welcome for the increase in sales this week. I’m happy to help. 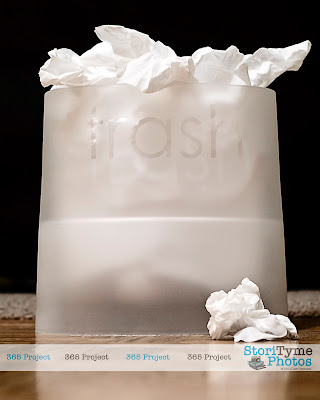