From the very beginning, I knew that Cadence and Electra were bound to be good friends. Before my pregnancy even began to show, Electra would snuggle up close and lie with her head on my belly, as if she was listening. By the time I felt the first fluttering movements of the little life inside me, I realized that beneath Electra’s droopy cheek, Cadence was kicking, as if she knew Electra was there. 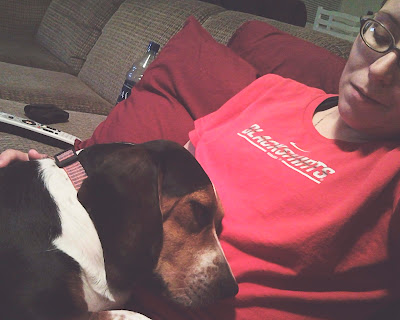 The first day we came home from the hospital, Electra wasn’t sure what to think. She sniffed Cadence curiously, but kept a distance. I think she was more mad than anything. After all, Steven and I had been gone for a week, and now here we were, bringing this strange-smelling, squirmy miniature human with us.
It didn’t take Electra long to figure it all out though, and soon enough, she made it very clear that Cadence was, in fact, her baby. Electra would snuggle in close to while Cadence slept, and sit next to her when we put her on the floor to play.
Electra is a pretty mellow dog by nature, but I was amazed at how gingerly she moved around the baby, as if she knew that she needed to be extra careful. Even funnier was the way she would keep a wary eye on everyone who came calling, as if to make sure they were treating her baby with the utmost care. Wherever Cadence was, you could be sure that Electra wasn’t far behind. 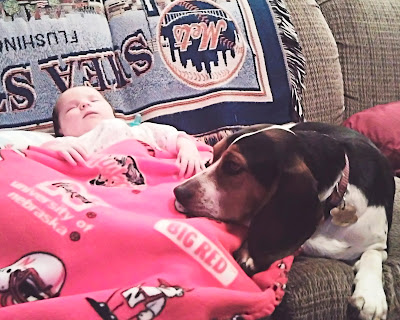 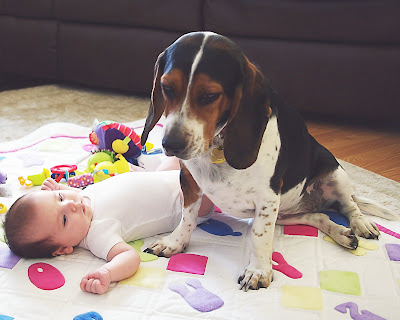 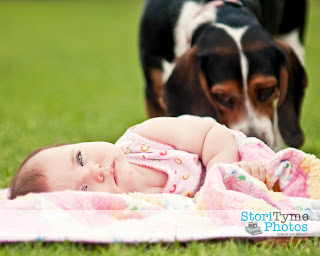 When Cadence finally got a little older, and was able to begin moving around on her own, it became very clear that the relationship was not one-sided. As soon as Cadence was able to get the hang of the whole crawling thing, she hardly left Electra’s side. She wanted to touch her hair, her ears, her tail. Her tiny fingers probed Electra’s mouth. She accidentally jabbed her fingers in Electra’s eyes, and pinched the tender skin between Electra’s toes. Steven and I would pull Cadence’s zealous hands away.
“No, Cadence. Be gentle. Niiiice doggie,” we would say, showing Cadence how to stroke Electra softly. “Good girl. Electra is a niiiice doggie.”
Electra would sit patiently through the accidental assault, giving  a thankful sigh as we helped Cadence pet her gently. It didn’t take long before Cadence began to understand, and we would often watch her crawl over to where Electra was napping and give her a few gentle pats. 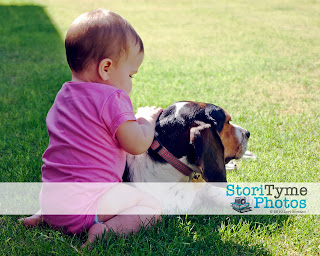 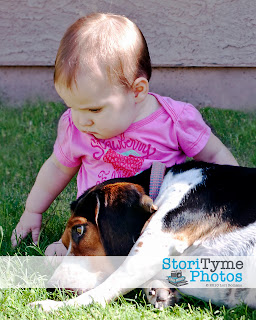 When Cadence began to test her chubby little legs, a whole new world unfolded. Suddenly, she was determined to conquer everything in her path, and that meant walking. She began pulling up on everything–chairs, bookshelves, the couches, our pant legs, and of course, her dog. Electra was patient, as always, even as Cadence clutched thick handfuls of her drooping skin to heave herself onto unsteady legs. Several times, we watched as Cadence lost her balance and toppled over, still holding on to her poor, patient dog. With so much Basset Hound in her blood, Electra’s excess skin was like a bungee cord, so she hardly even seemed to notice.
As Cadence took her first shaky steps and began walking on her own, Electra suddenly became something to chase, and to run away from. Whenever Cadence would hear the clicking of Electra’s toenails on the hardwood floor, she would squeal in delight and turn to run the opposite way, convinced that Electra must be chasing her. There have been several games of chase, a couple of wrestling matches, and even a few games of Tug-o-War. Unfortunately, Cadence is not yet steady enough on her feet, and there have been a few bumps, bruises, and even a couple of scratches on her face as a result. They are learning though, and it won’t be long before Cadence and Electra are a pretty even match.
I have a feeling, the Adventures of Cadence and Electra are just beginning. Today’s 365 Project entry is dedicated to my two favorite girls, and all the adventures yet to come… 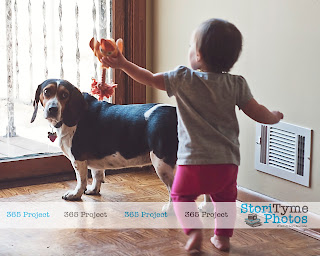 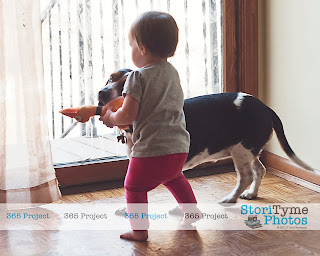 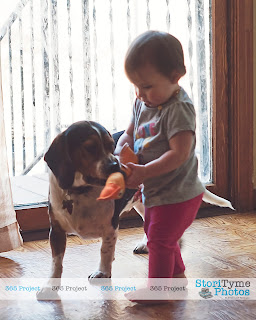