In spite of the snow forecast in Nebraska tonight, there are definitely some signs of spring beginning to show. The first buds are sprouting on the trees, and if you look very carefully, you can see tiny little bursts of green amongst the dead brown grass in the yard.

Electra has been spending much more time outside now that it has begun to warm up. For our sweet hound dog, the move to Nebraska has set her nose on fire with a whole new world of scents to track. Her favorite thus far have been the rabbits and squirrels that like the play and forage in our backyard. Unfortunately for Steven and I, our rental house doesn’t have a dog door, but at least we’re getting our exercise getting up and pulling open the heavy sliding door six-dozen times a day when Electra spies an unsuspecting animal in the yard that she needs to investigate.

What our poor dog doesn’t quite understand is that these animals have taken to taunting her. They know they can out run her, and they seem to have figured out that Electra loses all touch with reality when she catches a fresh scent. She’ll be hot on the trail of the rabbit that just darted out of the yard, her tail forcefully fanning the air while she howls, not even realizing that two fat squirrels have crept up behind her and are happily digging acorns out of the dirt.

The squirrels are the worst culprits. They seem to take immense pleasure in torturing Electra. They wait until she has just been let into the house, and then they descend from the trees, darting through the yard and chasing each other. Sometimes Electra will sit at the door and watch, waiting to be let out so she can slowly stalk her prey. Other times, she howls loudly and claws at the glass patio door until either Steven or I let her out, and then bursts into the yard trying to catch one of the furry little creatures before it can escape.

You wouldn’t know it by looking at her (hell, you wouldn’t even know it by being around her since she’s so lazy that she sleeps more hours than she’s actually awake), but Electra can actually run pretty fast when properly motivated. It’s actually pretty hilarious to watch. She tucks her head down, bends her tail at a 90-degree angle, and just hauls ass. Granted, she’s not going to win any races against any greyhounds anytime soon, but I think you’d be surprised if you actually saw her in action, and today, Electra’s persistence almost paid off.

One squirrel was giving Electra a particularly hard time today. Steven and I noticed about the eighth or ninth time Electra was clamoring to get outside that Mr. Squirrel let Electra get within a foot of catching him before darting away and jumping up on the fence and into the tree where Electra couldn’t reach him. While Electra sniffed the ground and busied herself following the fresh scent, Mr. Squirrel actually sat in the tree, chewing on the branches, and then breaking them off and throwing them down at Electra. When Mr. Squirrel realized that Electra was too busy sniffing to noticed the aerial assault, he decided to sneak down into the yard behind her. 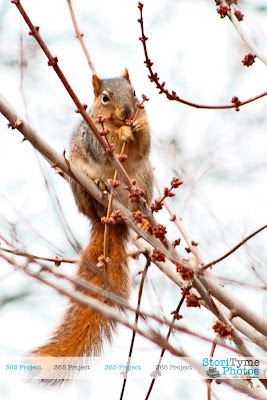 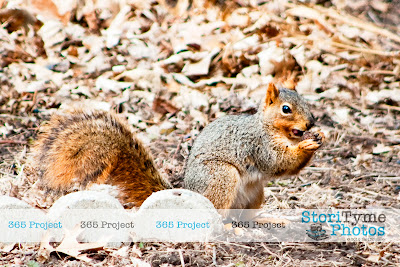 It took a few moments, but Electra finally noticed that Mr. Squirrel was there, and she promptly chased him back onto the fence. 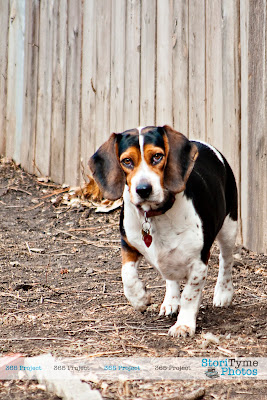 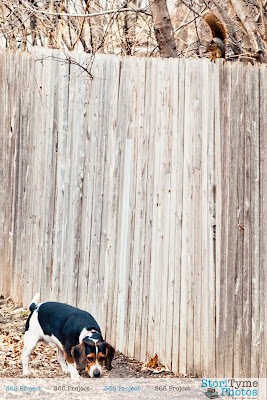 From his lofty perch, Mr. Squirrel continued to taunt Electra, tossing down bits of debris and chattering loudly. He even began to crawl down the side of the fence.
Suddenly, he lost his balance and fell, hitting the ground mere inches from Electra’s face. For one split second, we thought that today just might be the day that Electra actually caught a squirrel. They both jumped, and took off running in a flash of leaves and fur. 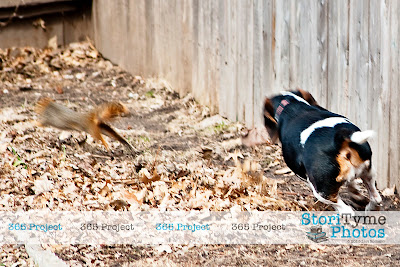 Mr Squirrel managed to leap onto the fence and dash up the tree to take refuge on the power lines, leaving Electra wild-eyed and panting in the yard below him. He seemed looked down upon his adversary with a newfound respect, though in the photo it also sorta looks like he’s flipping her the bird. 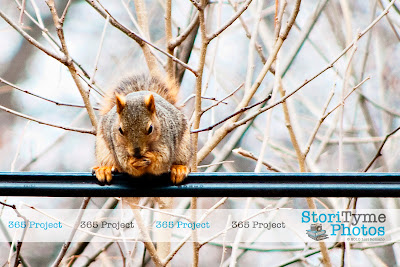 They stared at each other for a moment, and then Mr. Squirrel turned and ran away, off to find another yard to pillage. For today, at least, Electra won.