The first time we passed by The Fish Store on our way to store to buy groceries, I thought of our friend Foerth immediately. Among his eccentricities (and if you’ve read any of the previous blog entries about him, you already know there are many) is his obsession with fish. Whether it be fish in his own personal aquariums, fish in the countless rivers and oceans the world over, or fish cooked and served on a plate, Foerth is a fish freak. He even owns a fish costume that he bought on Ebay. Don’t believe me? Have a look for yourself… 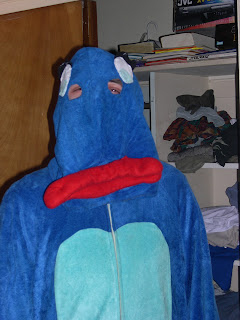 Foerth’s fish obsession seemed to reach its peak during college. Fortunately for him, fish were the only pets that students were actually allowed to keep in the dorms, so he was able to stock two large tanks to his liking, and that is exactly what he did. Since it was too far to walk and he had neither a driver’s license nor a car (which is another story for another time), Foerth devised a foolproof plan to get to the local pet store and back to pick up supplies without ever having to catch the bus or call a cab.

At least every other week, Steven’s phone would ring somewhere between 10:00 and 10:30 a.m. on Saturday morning.

“Hi Steve. How are yoooou?” Foerth would say.

“Well…” Foerth would begin, and then a long pause before he continued. “Josh wants to know if you want to go to the fish store.”

(Please note that Josh did not own any fish, nor did he ever plan to buy any).

“Why would Josh want to go to the pet store?” Steven would ask.

“Well Josh wants me to buy some feeder fish to feed my fish,” Foerth would explain.

“So, what you’re saying is you want to go to the fish store, and you want me to drive you there?” Steven would ask.

Sometimes it was Josh that wanted to go to the pet store. Other times, Foerth would call up those Saturday mornings and ask if Steven was going to the comic book store (that just so happened to be across the street from the pet store). Once, he even called and told Steve that our friend Money wanted to go to the comic book store. It was always something, and Steven was always game.

Foerth went through several different kinds of fish during his college career, but the longest lasting were his Oscar and a couple snakeheads he managed to buy at a local pet store before it was illegal to buy or own them in the United States.

For those of you not familiar, snakeheads have been banned in the U.S. because they can singlehandedly destroy an entire ecosystem if released into the wild. They reproduce rapidly, violently devour other fish and animals, and can even wriggle out of the water and survive on land breathing air for up to four days. I’ve seen these beasts eat, and I’ll tell you, those shark feeding frenzies they show on the Discovery Channel during Shark Week are like an afternoon tea party in comparison. Foerth would bring home a couple dozen feeder fish, pour them into the tank, and in less than ten seconds, the snakeheads devoured them, save for the occasional twitching fin left floating in the water.

Foerth loved those snakeheads, and loved them even more when he found out that they were being banned. Unfortunately, the August 2003 blackout that knocked out the power in eight states and parts of Canada for two whole days were more than the snakeheads could endure, and in spite of Foerth’s best efforts to save them, they died a few weeks later.

After the snakeheads, any other fish that Foerth brought home just seemed boring in comparison. He even bought a couple of piranhas, thinking they might prove to be an exciting replacement, but they didn’t last. It wasn’t long after that Foerth packed up his fish tanks for good and decided to give pet ownership a break for awhile. But then, he got his dog, Indy (or Satan as I like to call him), but again, that is another story for another time.

Today’s 365 Project entry is dedicated to our favorite Foerth and his crazy fish fetish. When he comes to visit us here in Lincoln, I know one place he’s going to ask to visit. 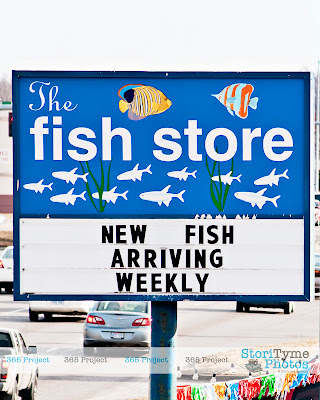