I don’t know if you paid attention to the news today, but it’s official…hell has frozen over. No, I am not an end-of-the-world conspiracy theorist. And I am not talking about the fact that it’s the end of March and it actually snowed today because, let’s face it, I live in Nebraska. Around these parts, it’s possible to get a taste of all four seasons complete with rain, snow, hail, thunder, lightning, fog, a heat wave, and a tornado all within a 24-hour period.

Today, hell froze over, the earth shifted on its axis, a wormhole opened, and I’m pretty sure we all might have been sucked into an alternate reality because, today, my child actually fell asleep in her high chair while eating a snack.

You might think I’m crazy or that I’m overreacting, but if you do, you have obviously never met my daughter. Steven and I named her Cadence for a reason, my friends, partly because we are both drummers and we both thought the name was pretty darn cool, and partly because from the moment I felt the first fluttering movements in my womb, it became immediately clear that this was one little girl that goes steady and just doesn’t stop.

From the moment Cadence wakes up in the morning, she’s on the go, always moving. She took her first steps just before she turned 9-months-old and she’s been going non-stop ever since. Some days it’s even a struggle to get her to be still long enough to take a nap. At both nap time and bed time, we have our routine. Turn on the white noise and sit down in the rocking chair with Cadence’s favorite blanket and a bottle of milk. I can rock and rock and rock her and just when I think it’s safe to put her down in her crib, her eyes pop open and she snaps to attention and we have to start the whole process over again.

Steven and I used to laugh when we saw photos of other people’s children passed out in their high chairs or exersaucers, because we never thought there was a real chance that Cadence would join the ranks with those kids. Strapped in her high chair she’s either devouring the food on her tray, sneaking pieces of it to the dog, talking and waving her hands wildly, bopping her head to any music that happens to be playing, and always, always tapping her feet (a habit she gets from her compulsive-tapper Daddy).

Today, as I saw her movements become more lax and her head begin to slowly drop toward her shoulder, I thought I must be dreaming. But lo and behold my sweet little Energizer Bunny must have still been a little worn out from the cough and cold she’s been battling this past week, because she never even noticed as I moved in with the camera and began to snap away. 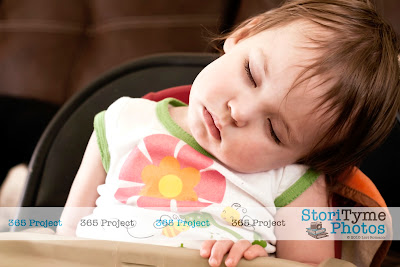 Our dog Electra, on the other hand, is one of the laziest animals God ever put on this green earth, so I wasn’t surprised to catch her snoozing in the background. 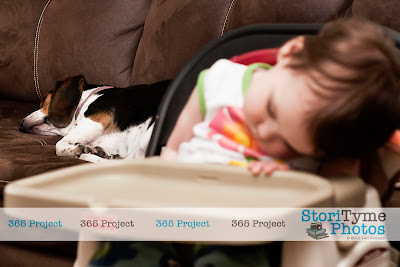 And just because I never have the chance to get a good close-up of Cadence’s beautiful eyelashes, I moved in for a shot. All those expensive mascaras ain’t got nothin’ on these babies. 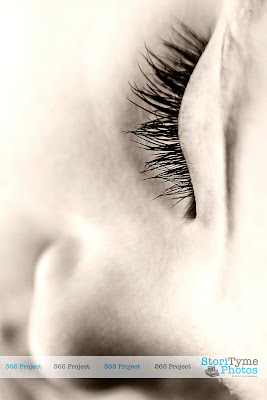