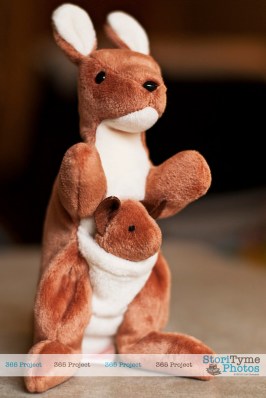 It’s an adorable little creature, complete with a minature joey peeking out of it’s pouch. I’m not sure where we got Pouch, but she has become one of the chosen few that Cadence likes to sleep with in her crib. It’s VIP only in the crib with Cadence’s favorite ginormous stuffed giraffe and favorite baby doll, and Pouch somehow earned a pass.
Today, when Cadence woke from her nap, she spent nearly 20 minutes playing in her crib, perfectly content to look at her baby animal book and talk to her stuffed animals. When I finally went in to get her, she wanted to bring Pouch to play in the living room. It was then that I noticed something slightly disturbing about her new little friend.
I had assumed that the little joey was securely sewn into the kangaroo’s pouch, since it was just his little head poking out and there didn’t seem to be a whole lot of extra room for his body. But, instead of sewing him in tightly, the toy’s manufacturers apparently thought it was enough to attach him with one little string to the kangaroo’s belly. Unfortunately, they must not have imagined what it would look like if someone would try to pull the little joey out of the kangaroo’s pouch, because it looks like this: 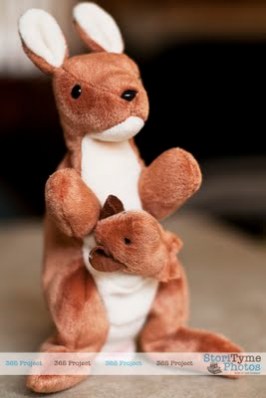 I don’t know about you, but I find it a little morbid that the kangaroo apears to be clutching a severed head.
I understand if the pouch isn’t big enough to hold the entire body of a little joey. Hell, I even understand if the toy company just decided to cut corners to keep production costs down. But is it really asking too much to make sure you attach the joey’s head securely in the pouch where it’s supposed to be, so it doesn’t appear that the big kangaroo had turned into some sort of marsupial serial killer?

Today’s 365 Project entry is dedicated to the good folks over at the Ty company, who have been scaring children with Pouch and her severed head since 1996.