>Things have changed around the Romano house since Cadence finally figured out how to climb up on the couch. We had to do a bit of rearranging (ie moving things up higher or hiding them in the kitchen beyond the baby gate). We also now spend a large portion of our day repeating the words “Sit on your butt!” over and over and over. She thinks it’s funny to sit like a little angel just long enough for us to take our eyes off of her, and then stand up and start either dancing, jumping, or trying to climb on the end table the minute we’re distracted.

Cadence has also developed quite an obsession with both the TV remote and my laptop. I don’t know if it’s because she likes pressing the buttons, if it’s because she sees Steven and I using them and she wants to try too, or if it’s simply because she enjoys our reactions whenever she gets ahold of them and starts wreaking havoc. My guess is it’s some combination of all three, and she spends most of her waking hours coming up with devious schemes to get her little hands on them.

Her latest ruse is crawling up on my lap to snuggle and then pursing her lips like she wants a kiss. Oh so sweet! What Mom can resist that, right? But as soon as I pucker up and lean in to give my darling daughter a smooch, she reaches around me and either grabs the remote or starts hammering on my keyboard.

Little turd. I think I must tell her at least a dozen times a day that she’s lucky she’s so cute.

I love tonight’s photo because I managed to catch her in the act. While Steve was cleaning up the kitchen after dinner and Cadence was playing with some of her toys on the floor, I took a moment for a quick bathroom break. When I emerged, there was Cadence, climbing up on the couch. When she saw that I had returned, she dropped down and sat, oh so innocently.

I grabbed my camera and waited.

It didn’t take long before  noticed her little hand creeping toward the remote that was sitting beside her. She thinks she’s so slick, but tonight, she’s totally busted. 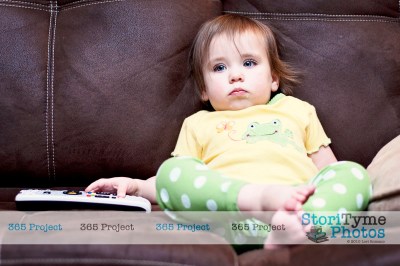 Today’s 365 Project entry is dedicated to my daughter and her devious ways. I’ve got my eye on you little girl!