One of the things I love most about being back in Nebraska is finally feeling really reconnected with nature. Even living in the middle of Lincoln, our backyard is a playground for the local wildlife. At any point during the day, I can look out the windows and see squirrels, rabbits and dozens of different birds. I’ve been trying to figure out a way to get some good photos of the animals that frequent our yard, but it seems that every time I grab my camera and open the door, Electra manages to squeeze through and chase everyone away before I get the chance.

Electra’s latest obsession is the family of rabbits that hops into our yard six or seven times a day. I’m not sure exactly how many rabbits there are, but I have seen at least four of them in the yard at one time. Electra didn’t even know what to do with herself that day. She took off chasing one rabbit, and another one ran right by her, causing her to turn so sharply that she lost her balance and rolled twice before landing back on her feet to continue the chase. By then, all four of the rabbits were sitting safely on the other side of the neighbor’s chain link fence, mocking our poor clumsy hound dog.

Tonight, while Electra was locked in the kitchen eating her dinner, I noticed two of the rabbits out in the yard grazing. Figuring this might be my only chance to actually get a few shots without my dog barreling out the door and scaring the rabbits away, I quickly grabbed my camera.

I eased the sliding glass door open just far enough for my camera to fit through, and then stood in front of the opening so Cadence couldn’t escape. I zoomed in, focused, and squeezed off a few shots. 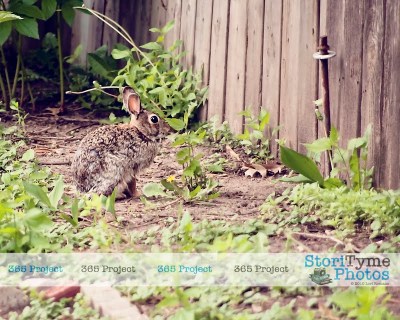 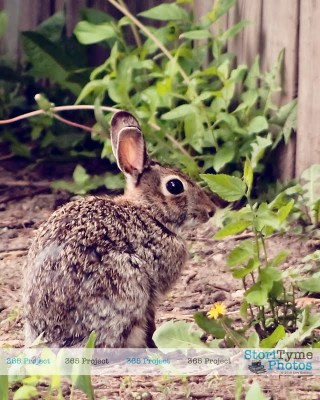 As I stood watching, things suddenly took a very strange turn and I found myself in the middle of Rabbit Fight Club, right there in my own backyard.

I barely had time to move my camera and focus as the rabbits jumped and kicked and bounced off each other. I followed the action as best I could, laughing so hard I felt tears beginning to form in my eyes.

Cadence was doing her best to push my leg out of the way so she could squeeze out the door, and poor Electra was still in the kitchen licking her now empty food bowl, completely unaware that her arch rivals were duking it out in the backyard at that very moment. Had she actually been able to tear her attention away from her food bowl, Electra just might have been able to actually catch one of the rabbits while they were busy distracting each other.

Instead, the fight continued. 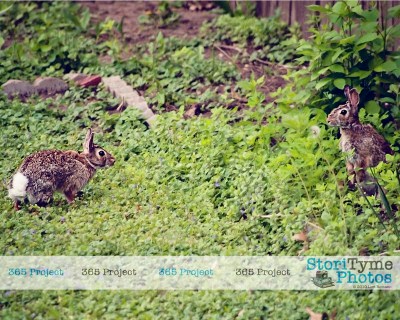 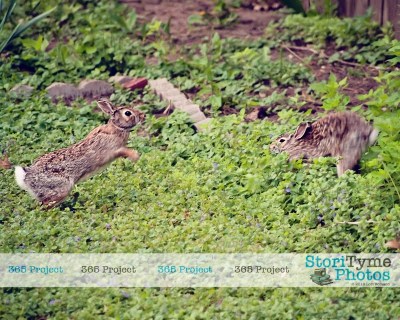 In the midst of the fray, a robin stood watching like a referee.

Between rounds, the rabbits would stare each other down with their beady brown eyes, sizing each other up before leaping into the air and attacking again. 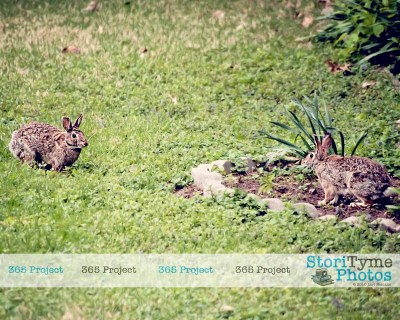 Finally, after several frenzied attacks and a few rather impressive aerial stunts, the rabbits seemed to have settled whatever disagreement started the whole mess. 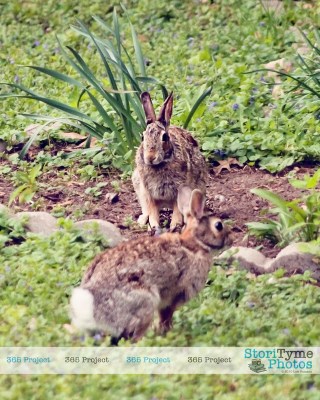 One rabbit hopped away and exited the yard through a hole in the wood fence, while the other meandered slowly, snacking on a few dandelion stems and posing for a few close-up portraits near the bottom of the steps. 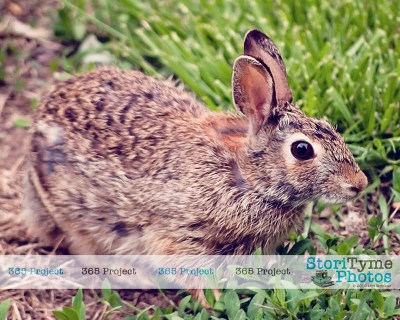 Congratulations my furry little friend, for tonight you were victorious.
Today’s 365 Project entry is dedicated to some truly hare-raising entertainment. 🙂 Just remember, the first rule of Rabbit Fight Club is…