From January of 1999 to June of 2007, millions of people were glued to their televisions, making David Chase’s HBO drama The Sopranos one of the greatest and most financially successful television series of all time. I wasn’t one of those millions though. When The Sopranos debuted, I was just a college freshman, and my TV time was limited by the lack of cable or satellite in the dorms. If I headed to the Brickyard or the TV lounge, the choices were usually whatever sporting event happened to be on, or WWE wrestling.

By the time I was a junior, The Sopranos had already become a roaring success, and one of my English professors, Dr. Sluberski, encouraged his students to watch it, not only because it was a great show, but because one of our fellow students had recently been cast as Jackie Aprile Jr. That’s right kids, I went to school with Jason Cerbone. I even took a Philosophy 101 class with him my freshman year–sat right next to a guy who had appeared in the music video for the song “Luka” by Suzanne Vega and would later go on to be listed as one of People Magazine’s Top 25 Sexiest Men Alive after his stint on The Sopranos. He was nice enough from what I remember–quiet, soft spoken, and completely baffled by the musings of guys like Descartes, Plato, Kant, Hume and Nietzsche.

But even then, I didn’t give The Sopranos much thought. It wasn’t until I started dating Steven and caught bits and pieces of a few episodes while he and Foerth were watching them that I really developed any interest in the show. After years of saying we would like to go back and watch the entire series from beginning to end, I bought the DVD box set for Steven for Father’s Day this year and we finally got to see what all the fuss was really about.

Had the series ended up being just another straight forward mafia show, I probably wouldn’t have made it to the end. There are plenty of shows and movies out there already that offer little more than gratuitous violence at the hands of characters who speak lines of little substance with thick New York accents. The Sopranos  is something else entirely.

Having just finished the series in its entirety, it is easy to see what captured the attention and the accolades of so many viewers. Sure, the show revolves around an Italian-American mobster living in New Jersey but, as a whole, this brilliantly written television drama explores issues faced by individuals and families the world over. Characters in the series struggle with family relationships, drug and alcohol addictions, honesty, fidelity, betrayal, loss, grief, insecurity, lonliness, jealousy, hypocrisy, compassion, empathy, power, self-control, arrogance…the list goes on and on. It is this universal appeal, this brutally honest and straight forward depiction of the struggles we humans face as we try to come to terms with the discrepancy between appearances and reality that made The Sopranos one of the most acclaimed series on television.

Tonight’s 365 Project is dedicated to The Sopranos. If, like me, you just never got around to watching The Sopranos for whatever reason, I encourage you to give it a go and see what you think. You just might be surprised at how quickly it pulls you in. 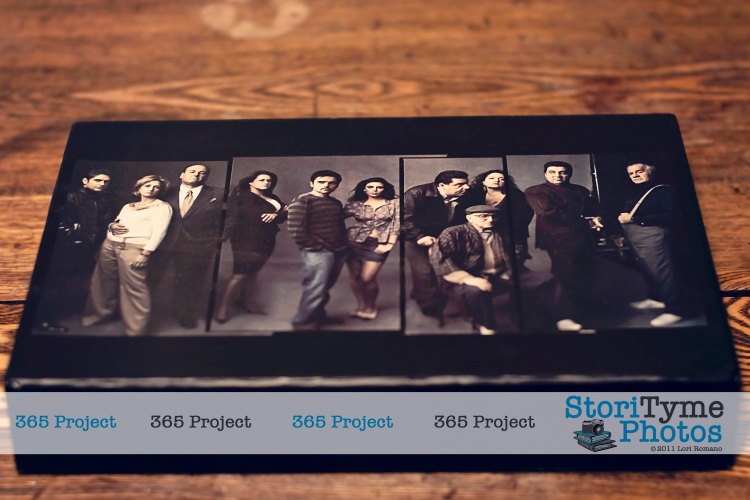