So, it’s official. I am now 31. It wasn’t so long ago that I considered 31 old, or at least middle aged, and I always wondered why my parents took offense to that. Now that I’m here myself, I understand. 31 is just a drop in the bucket. I mean, I don’t feel like a kid anymore. The fact that I actually like to take naps is proof of that. But, I am far from considering myself geriatric, so I guess 31 isn’t all that bad after all.

And I have no complaints about my day today. Cadence and Electra actually let me sleep in a bit this morning. We finally got up and around just before 9:00 a.m. We had a little breakfast, then just hung out and relaxed a bit. Steven brought home some Jimmy Johns sandwiches for lunch (partially because they sounded good and partially because we need to go grocery shopping).

Cadence went down for a nap after lunch and I killed some time on Facebook and worked on some photos. Then, I thought I might lie down a catch a few zzz’s myself before we headed out for dinner.

There is an Indian restaurant here in Lincoln called The Oven that I have been wanting to try, but I just wasn’t feeling Indian today, so we ended up heading to an Italian restaurant in the Haymarket called Vincenzo’s. The food was really good. Cadence, who never ceases to amaze me with her willingness to try new foods, loved the calamari appetizer. She then proceeded to eat half my house salad, which was tossed with a homemade vinaigrette, an entire dinner roll, and several helpings of my Linguine Tutto Mare. Seriously, this girl loves to eat, and she has a very short list of foods she doesn’t like…not bad for an 18 month old.

After dinner, we strolled back toward Memorial stadium, just in time to hear the Cornhusker Band marching down the streets through the campus. We followed the parade of fans through the entrance and chose our seats in the front row near the 40-yard-line.

Essentially the exhibition show tonight is a little preview for the fans, and a chance for the band members who have been attending camp and practicing all week to show off what they have learned. Let me tell you, it was damn impressive for only a week of practicing together. These kids have been putting in 10-hour days and their dedication shows. I can see already that it’s going to be another exciting year at the University of Nebraska. 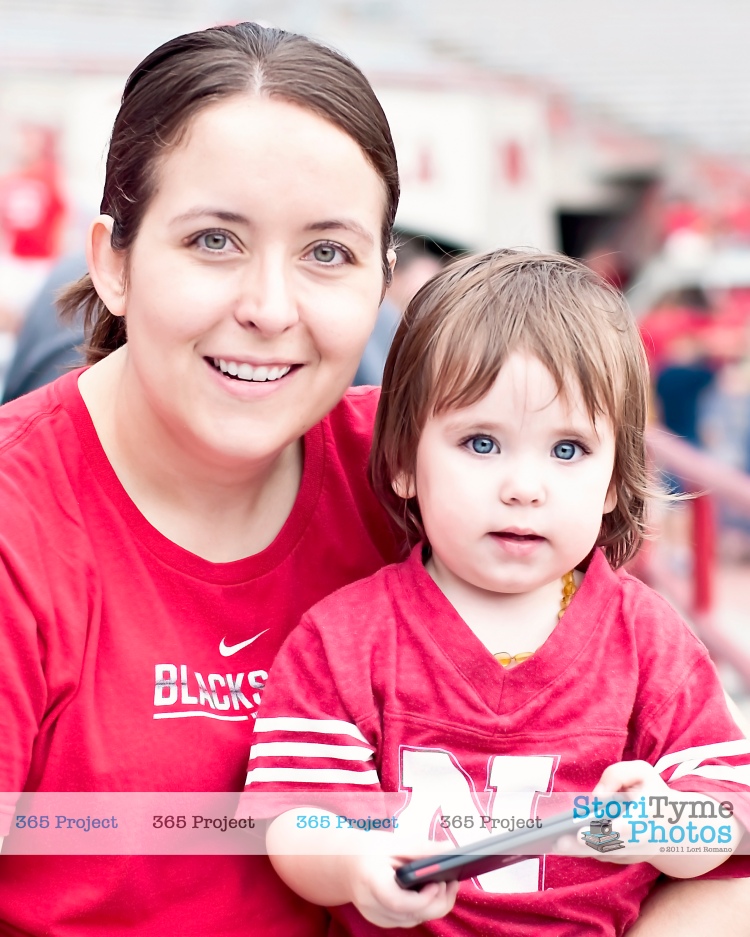 We were blessed with the perfect evening. The clouds were rolling in and there was a nice cool breeze, but luckily the rain held off through the entire show. The minute the drumline started playing the opening cadence calling the rest of the band onto the field, our little Cadence was hooked. She loved the music, and was totally mesmerized by the way the kids were marching in formations. She did a little dancing, a little yelling, a little laughing and a whole lot of clapping. And, when it was all over, she waved goodbye as the band marched its way off the field. It was so much fun, and we’ve already decided we are definitely coming back again for next year’s show.

After leaving the stadium, we had just one last stop to make before we retired home for the evening, and that was to swing by the Dairy Store to pick up a little ice cream. Tonight’s choice = Chocolate Cookies & Cream. Mmmmmm! What a great way to end the perfect day! Happy Birthday to me!

Tonight’s 365 Project entry is dedicated to all my wonderful friends and family for all of the birthday wishes! Thank you all so much for making my day so special!