Since Steven and I made a conscious effort to improve Cadence’s sleeping habits several months ago, she has been sleeping like a champ. She generally wakes around 8:00 or 8:30 a.m., goes down for a nap between 1:00 and 2:00 p.m., sleeps for 1-3 hours, and then goes down for the night between 8:30 and 9:00. Except for the occasional bad day where she either skips a nap or awakens during the night and refuses to go back to sleep without a fight, we have been very pleased with the routine we’ve established.

Then, we leave home, and all hell breaks loose.

Cadence was actually thrown off schedule the day before we left for Arizona when we spent the day celebrating her cousin Korbin’s 1st birthday. She caught a 5-minute catnap in the car on the way to the party, and then didn’t sleep at all for the rest of the day. By the time we returned home, the big black bags under her tired eyes were making her resemble a very young Wednesday Addams. Yet, she refused to give in, and actually fought bedtime until nearly 10:00. She also woke two times during the night, and woke up the next day just before 8:00 a.m.

I was hoping that she might catch a little nap as we drove to Omaha to catch our flight. No such luck. And if you read yesterday’s post, you know that she napped for all of 5 minutes as the airplane was landing and taxiing to the gate. By the time she got wound down and it got dark here in Arizona, it was already an hour past her normal bedtime. to make matters worse, she woke around 2:00 a.m. and decided it was time to play.

I tried bringing her into the bed with me to sleep. When all else fails, snuggling with Momma, usually does the trick. But Cadence was having none of it. She spent a good 45 minutes sitting up, lying down, sitting up, standing up, flopping down, sticking her hand inside my collar and sleeves, standing up, bouncing on the bed, lying down, snuggling close, and trying to impress me with an impromptu anatomy lesson as she jammed her little finger in my face and said, “Eye. Eye. Noh. Teeh. Hah. Noh.” = “Eye. Eye. Nose. Teeth. Hair. Nose.” until I finally got fed up and put her back in the Pack ‘n Play.

I expected a revolt, but she just continued jabbering, and picked up the anatomy lesson with one of her baby dolls where ours left off. Once, she stood up and asked for milk, but I told her no, it was time for night night, and she accepted that news without a fight as well. I guess she really was tired. Another 20 minutes later, and she was sound asleep again.

Cadence woke for a the day just after 7:30 Arizona time, about an hour later than usual. Considering her 2-day lack of naps and late bedtimes, I was certainly hoping for a whole lot more sleeping in, but my little Energizer Bunny was having none of it.

After a whole lot of playing and running errands, we finally arrived back at Nonna’s house in time for a nap (about 2 hours later than usual, but better late than never I guess). So overtired by that point, Cadence did everything she could to fight sleep. She cried, whimpered, hollered, whined, demanded tissues to blow her nose, asked for more milk, tossed her baby dolls out of the Pack n’ Play, and then cried to get them back, tried to crawl out of the Pack ‘n Play, laid down, talked to her babies, sang, called for Dada, kicked her legs, rolled around, rearranged the blankets, demanded another tissue, and talked to her babies some more.

Just when I thought it might be getting to the point were it was too late for her to even have a nap, the room grew suddenly quiet.

I glanced slowly over at the Pack ‘n Play. Cadence had been lying on her back, holding her new baby doll up and jabbering away, and had apparently fallen asleep mid-jabber. I stifled a laugh and grabbed my camera. Finally, my little Energizer Bunny’s batteries ran out… 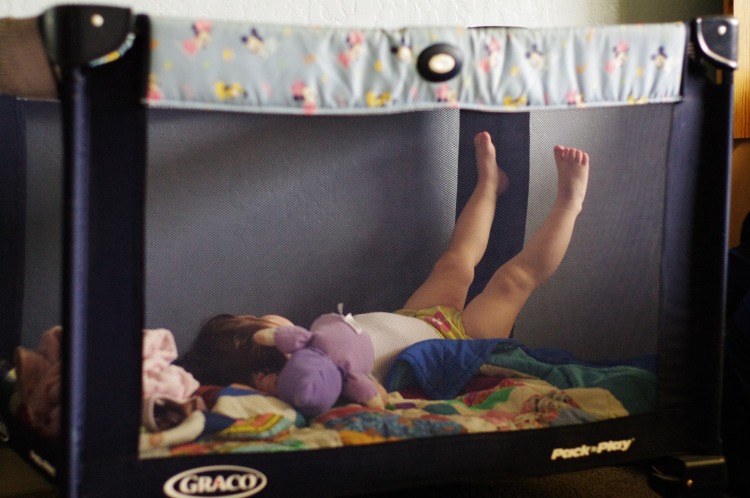 Tonight’s 365 Project entry is dedicated to my going going girl. Here’s hoping we’ve got a good night’s sleep in store for both of us!