Life is full of little moments that you’re just never quite prepared for. And somehow, the majority of them seem to involve your children. It doesn’t matter how level-headed or organized you usually are. It doesn’t matter how far you plan in advance. Children are masters of disaster. They can turn your entire world inside out and sideways in three seconds flat. I’m not 100% sure how that Chaos Theory works, but I would bet my last dollar that the guy who came up with it had a toddler at home, because that, my friends, is just how they roll.

Feel free to disagree with me here if you think I’m wrong, but I have come to the conclusion that the most important thing you can do when you are raising children is to try and be prepared for anything.

And, if nothing else, try to keep your sense of humor.

You seriously better dust off those imaginations people, because your kids can put you in situations you never even dreamed were possible. For instance…

Cadence and I drove to Omaha today to take Gamma Diane and Uncle Keith back to the airport after spending a very fun weekend together. Cadence was exhausted but, as always, managed to fight sleep and keep herself awake until we were about 10 minutes from the house.

Of course, she woke immediately when I tried to get her out of the car, but she still had that glassy-eyed sleepy stare, so I figured she might actually go back to sleep. I changed her diaper and put her in her crib. She flopped down immediately and didn’t even make a peep as I left the room.

About 10 minutes later, I heard Cadence stirring. She sighed once, twice. Then there was some rustling and a couple of thumps as the rolled around, perhaps trying to find a comfortable position. A few minutes later, she began talking to herself, quietly at first. Sometimes at nap time she talks and sings herself to sleep, so I didn’t think that all was lost. Perhaps she just needed a few more minutes to wind down and settle back in.

No suck luck. The talking grew louder as the minutes ticked by, and over the course of the next 45 minutes or so, I heard a wide range of giggles, squeals, hollers, grunts, coos, and guffaws, as well as a couple of bumps as Cadence emptied the contents of her crib (which included a baby doll, a monkey, a blanket and a pillow) onto the floor. Usually she empties her crib just before she falls asleep, so once again I thought she might actually be readying herself for a nap.

Wrong again, but I figured it didn’t hurt to leave Miss Cadence playing for a bit while I got caught up on a little work.

I hadn’t heard any loud thuds or crashing noises, so I couldn’t imagine that Cadence had climbed and fallen out of her crib. Yet, she sounded pretty upset, so I figured it was time to go see what all the fuss was about.

The smell hit me the minute I opened the door. Cadence often needed a diaper change about the time she was ready to get up from her nap, so that was not really out of the ordinary. Something, though, was certainly awry.

Cadence was standing funny in her crib, sort of hunched over behind the railing instead of hanging over the side to be picked up like usual. I stared at her for a minute, trying to figure out what she was doing, and finally realized that her shorts were gone and she was holding up her diaper.

“Hey little monkey, what did you do with your–” I started, but I stopped abruptly when I saw it. There, on the rug, about three feet from the crib was a flat greenish brown turd about the size and shape of a small hamburger patty.

She just stared at me, wide-eyed for a moment, and then started doing her best fake soap opera star wail.

I started to laugh.

Really, at that point, what else can you do? Vomiting was certainly an option, but luckily I was blessed with a strong stomach long before I became a Mom.

Of course, I also snapped a quick photo with my camera phone before gathering the cleaning supplies needed to sterilize and disinfect both the child and the room, and as I worked cleaning up the crime scene, I began to piece together just exactly what had gone on in that room in the moments before my arrival.

Here is how I imagine it went down…

When I changed Cadence’s diaper before putting her in her crib, I secured the diaper the way I always do, crossing one of the velcro tabs snugly over the other. Apparently today, this backfired.

After I left the room, I would bet that Cadence was lying sort of half-awake her crib for those first ten minutes when all was quiet and peaceful. And I’m thinking that she probably started chattering about the time she was filling her diaper. At that point, all hope of sleep was lost, but she wasn’t uncomfortable enough to really cry or protest, so she stayed, playing happily in her crib and tossing things out just for the fun of it.

About the time her crib was empty and there was nothing left to distract her, she probably started thinking that the lump in her diaper was a bit of a pain in the butt (pun intended, har-de-har), and decided to do something about it. I imagine it took a little while for her to work her way out of her shorts, but after that, all that stood in  her way of comfort was that darn diaper, so she pulled and tugged and twisted and turned and poked and prodded at it, yet was unable to pull just right to un-velcro the tabs.

And yet, with the right amount of force, she somehow managed to pull the entire front of the diaper out from under the tabs. So, the front likely fell down, which left the diaper hanging from her waist like a reversed apron and dropping the fresh turd right in her crib.

I like to think that the flattening happened while the turd was still in her diaper (perhaps she was jumping around and fell on her butt a few times), because the thought of my child sitting in her room making fecal matter mud pies is enough to turn even my iron stomach. Luckily, the evidence (or lack thereof) tends to support my theory because the only poo I found in my investigation (other than the turd itself) is one small spot on Cadence’s sheets where the turd likely landed when it fell from her diaper, and small streak on her hand which was immediately washed with soap and water, more soap and more water, and one more round of soap and water before I plopped her in the tub for her second bath of the day.

Then, it was time for some deep carpet cleaning, some laundry, and a thorough scrubbing of every surface in Cadence’s room followed by an airing out of the house, after texting the photo to Steven of course. After all, why should he have to miss out on all the fun while he’s at work? His response, once I filled him in on the gory details, was:

Spoken like a true guy. But, I do have to say that even I am a little impresed by Cadence’s accuracy, managing to throw the turd dead center in between her shorts, her blankie, her baby and her monkey. We like to think it means that she might have a very promising future in competitive sports. Until then, we are the proud parents of the undisputed Fecal Matter Flinging Champion of the world.

Tonight’s 365 Project entry is dedicated to all the bewildered parents out there. I am officially 20 months and 2 days into this business of parenthood but still, every day, there is something completely new. Sometimes, shit really does happen, and what else can you do, but laugh? 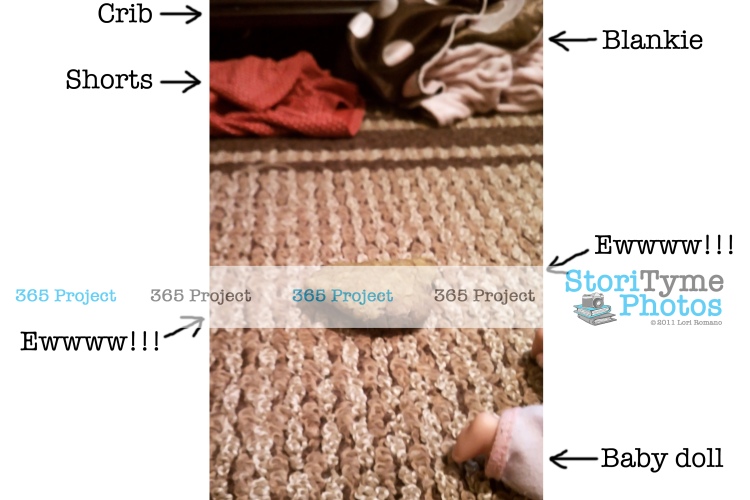