No matter what anyone tells you, there is no Parenting Handbook. Not really. Sure, you can go to your local Barnes and Noble and see about a hundred different books written by doctors and and nurses and nannies and trained psychologists, all claiming to be the unofficial parenting Bible you seek, but I’m going to let you in on a little secret…

Sure, you might be able to glean a morsel or two of helpful information, but, in the end, all children are different, and not one of those books is going to be the be all, end all, know it all answer to your prayers for parental guidance. In the end, you do your best, and hope that you survive the insanity.

One of the biggest challenges Steven and I faced in our first 22 months of parenting is what I like to call the Sleep Circus.

Every night, it’s a brand new show, an hour-long choreographed production. There’s dinner and playtime and clean up and bath and stories and dancing and sometimes even a chase scene or two if Cadence is feeling particularly squirrelly. Depending on the night (and our fiesty girl’s level of crankiness), the nighttime diaper change and putting on pajamas routine requires me to either be a lion tamer (when she is super pissy and trying to claw her way off the changing table) or a clown (when she just needs a little entertainment).

Once Cadence is diapered and dressed and promised a cup of milk, she is more than willing to give up and head to her room to listen to music and be rocked. And though she usually doesn’t give up and go to sleep right away, she is usually content to play in her crib and either talk or sing herself to sleep.

Last Thursday, Cadence was in a particularly chatty mood after I put her in her crib for nap and left the room. This is what I heard through the monitor…

The endless chattering went on like this for over an hour. Then, after a few moments of silence, Cadence started to protest. She hollered and whined, and I could hear her grunting in frustration.

Then, there was a loud, heavy THUD!

I jumped out of the chair and ran to the room, already knowing what I was going to find when I opened the door. Sure enough, there was Cadence, on her hands and knees in front of the crib where she had fallen. She looked up at me with wide, teary eyes and screamed.

I scooped her up into my arms, giving her a thorough examination as I cooed softly.

And miraculously enough, she was okay. Not a scratch or a bruise or even a bump on her.

She cried for a few moments, but it wasn’t even her hurt cry. It was the loud, wailing, “I-am-so-pissed-off-right-now” cry. The same cry we hear when we tell Cadence, “No, we are not watching Rango for the third time today” or “No, you can’t have a cookie before dinner.” And then suddenly the crying stopped and she was pushing away and demanding to be put down.

So, I set her down on the floor and watched with mild amusement as she stomped over to her bookshelf and gave three solid punches to the books on the middle shelf. Obviously, one of the middle shelf books was to blame for her accident. I wonder which one was the culprit.

As I stifled my laughter, and watched my daughter wipe her eyes and head into the living room to play, it dawned on me…

Houston, we have a problem.

Cadence knows how to get out of her crib.

I’m pretty sure I saw my life flash before my eyes as I realized that this, my friends, was the beginning of the end. I mean, it has only been a few short months that Cadence has been on a really good sleep schedule. Steven and I were just getting into a routine where we were actually able to bank a good 6-8 hours of sleep a night and not walk through our days as short-tempered, sleep-deprived zombies.

I had to think fast.

The short term solution was to turn Cadence’s crib around so that the shorter front rail faced the wall. And it worked like a charm. Boy was Cadence maaaaaad the first time I put her in there for a nap and she realized her climbing days were over. But, as I watched her grab the very top of the crib and jam her chubby little feet between the slats to give herself leverage, I knew that it was, indeed, a short term solution.

If we were going to survive the sleep circus, we would have to have to get creative, because putting Cadence in a toddler bed would only ensure that no one in the Romano household would ever sleep again.

And then I saw it…the answer to our prayers! Because, if it is going to be a circus, then by God, there should be a tent… 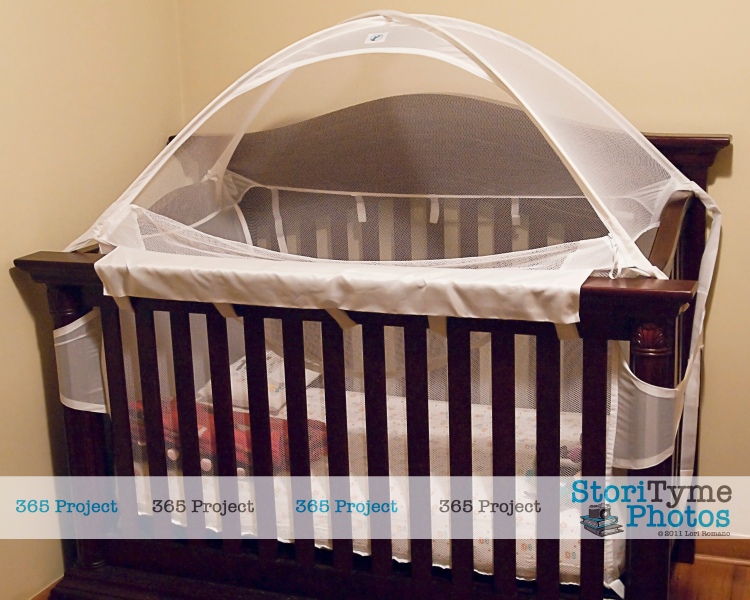 That’s right, a crib tent. Feel free to laugh, roll your eyes, judge me if you want. I used to be one of those people that would probably roll my eyes at something like this. Hell, I used to laugh at parents I saw who had their toddlers on leashes. I laughed right until I bought Cadence a cute little brown bear backpack and leash. We’ve never actually had to use it. She’s pretty good at listening and holding our hands, but I like to know I’ve got it if I need it, and I made sure I packed it when I flew to Arizona in September, thinking a leash might just come in handy if Cadence decided to launch her escape plan in the middle of Sky Harbor Airport.

So yeah, we have a toddler leash. And now we have a crib tent. We’re one giant plastic bubble away from being the overprotective parents that Momma Dawn and my sister Kassie used to joke about. But hey, if it saves us a trip to the Emergency Room with a head injury or a busted lip that needs stitches from falling over the side of the crib, then it’s totally worth it. And hell, if Cadence enjoys tents as much as I used to as a kid, she might actually end up fighting us when we try to take the tent off and stick her in a big girl bed.

Yeah, that’s probably not likely, but so far, she is sleeping in her new tent and not throwing a fit. I guess we’ll see what she thinks when she wakes up in the morning and realizes there is no escape. Muahahahaha! 🙂

Tonight’s 365 Project entry is dedicated to all the parents out there who have had to rethink and revamp those perfect parenting plans. What were some of your most memorable compromises?