The first (and so far the only) time I visited New Orleans, I fell in love. There is just something enchanting about that city–something that pulls you in, that changes you, and that keeps a little piece of you long after you’ve gone back home. The same thing happened to my husband the first time he went there too. Had we actually been able to find the time to go on a honeymoon after we got married, New Orleans was at the top of our list.

We’ll get back there someday but, until we do, we are on the lookout for anything that is inspired by our second favorite city (second only to New York City, where we met).

Back in January of 2009, I stumbled across Pappadeaux Seafood Kitchen in northern Phoenix when I was looking for a good seafood restaurant where we could go to celebrate Steven and our friend Foerth’s birthdays. It was almost a 90-minute drive from where we lived at the time but oh, was it worth it!

We had to wait over an hour for a table, and it wasn’t even a busy night. We didn’t care though. We grabbed a beer at the bar and sat outside listening to the jazz band until the hostess called us.

The food was amazing–as close as you could come to authentic Cajun and Creole food in the Arizona desert. Everything was fresh and perfectly cooked. We ate shrimp and oysters and alligator. We dared each other to try an order of frog legs, and guess what? They do taste like chicken.

Foerth put away a platter of assorted fried seafood that was bigger than his torso (lending credence to my theory that he does, indeed, have either a hollow leg or the fastest metabolism of any human being that ever lived), while Steven savored every last bite of the biggest lobster the chef could pull out of the tank. All I can say is that I’m glad the restaurant was so crowded, because my husband was moaning loudly with every bite.

Now, one thing Steven and I like to do when we stumble upon an amazing restaurant is to get ourselves some kind of souvenir. Sometimes it’s as simple as a matchbook or a business card. Sometimes it’s a t-shirt (if they have a cool one) or a commemorative glass. We’d noticed that our pint glasses from the bar had the Pappadeaux logo on them, so we asked our waiter if we could buy one.

Whoever first came up with the phrase “food coma” is dead on. The three of us were in a daze, we’re not even sure what happened next. When our waiter came back to settle our bill and bring us our packed leftovers to take home, he brought a bag with four Pappadeaux pint glasses, free of charge, about a dozen lobster bibs, and a whole handful of the Pappadeaux wet wipes that Steven had been using to remove the layer of butter from his face after his meal.

Of course, we should have just thrown away the wet wipes and bibs and saved the glasses, but there’s something about free stuff that makes people momentarily insane. So instead of chucking this stuff three years ago when we should have, we threw it in a junk drawer that was eventually emptied into a box when we moved to Nebraska and has been sitting in our basement waiting to be unpacked…until today.

1. Wet naps, even sealed in the nice plastic Pappadeaux packaging, do not stay wet forever. Use ’em or lose ’em people.

2. Our dog really will eat anything that resembles food…even a cartoonish-looking picture of a lobster printed on a paper bib.

3. My husband is a good sport when it comes to modeling for my blog. Here,  he is sporting a suit of armor and loincloth fashioned from paper bibs. Mmmm…sexy! 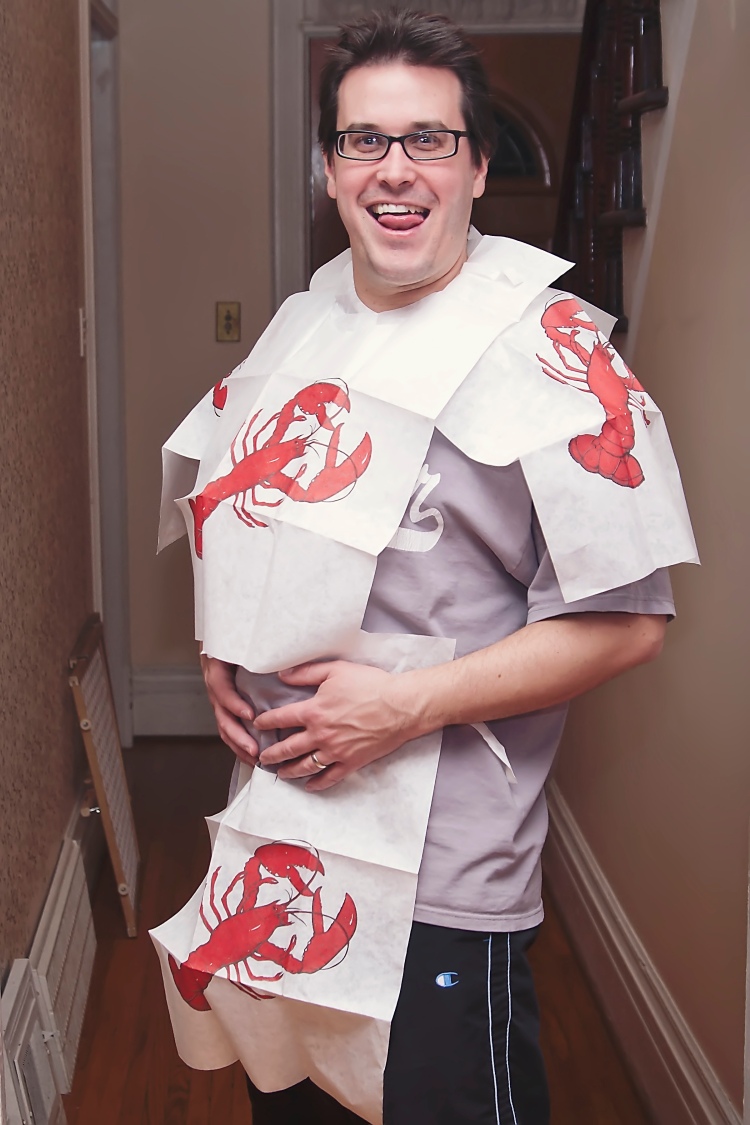