Anyone who knows me, knows that I love animals. My husband might argue that I love them a little too much, since I couldn’t bear to part with Angel (my dog of 15 years) when she passed, and instead had her cremated so she could continue to hang out with me in a little urn on my shelf.

Right up to the summer of 2008, I’d never met an animal that I didn’t like or get along with.

Then, I met Indiana.

Don’t let the photo fool you. Right now, you are staring at Satan himself. Avert your eyes people. Or he just might steal your soul.

At first glance, Indy seems harmless enough. He’s a strange looking little fellow, with long gangly legs and beady little black eyes. My sister Kassie thought he looked fake the first time she met him, like a cute, cuddly teddy bear. She reached out to pet him, expecting to feel soft, downy hair beneath her fingers. Imagine her surprise that Indy’s thick coat feels disturbingly like pubic hair.

Did I mention I hate this dog?

I tried to like him. I really did. After all, Foerth (Indy’s master) is one of Steven and my best friends from our college days, and when Foerth moved to Arizona, he spent his first 6 months there as our roommate while he settled into his new teaching job and looked for a place to live. After spending so many years living in the college dorms and pet-free apartments, I was actually really excited to have a dog in the house again. And deep down, I hoped that Indy would make a really good impression on Steven so it would be easier to convince him that we needed to get our own dog.

I have to say, after Indy, I am truly shocked that Steven gave the green light to adopt Electra.

Most of all, he hated the way that Indy seemed to challenge his authority, sometimes growling and barking and baring teeth when Steven caught him doing something wrong and tried to correct him.

Steven’s answer was to chase Indy around the house, catch him, and pin him–sort of like a cross between the WWE and the Dog Whisperer. This happened at least once a day, usually when Steven got home from work and was greeted at the door by a manic barking devil dog. The chasing would commence. Indy would be caught and pinned. And Steven would lean in close and whisper in Indy’s ear, “Yeah, that’s right. I’m the master.”

As much as Indy’s crazy little quirks annoyed me, I tried to make nice with him. I would throw a ball to him in the backyard, and I would pet him when he came over to sit next to me on the couch.

And what did devil dog do to repay my kindness? He ate my jumpdrive.

The little bastard stuck his face into my open backpack while I was getting ready to go teach my English 101 class, pulled out my jumpdrive, and had himself a little plastic snack right in the middle of the living room rug. 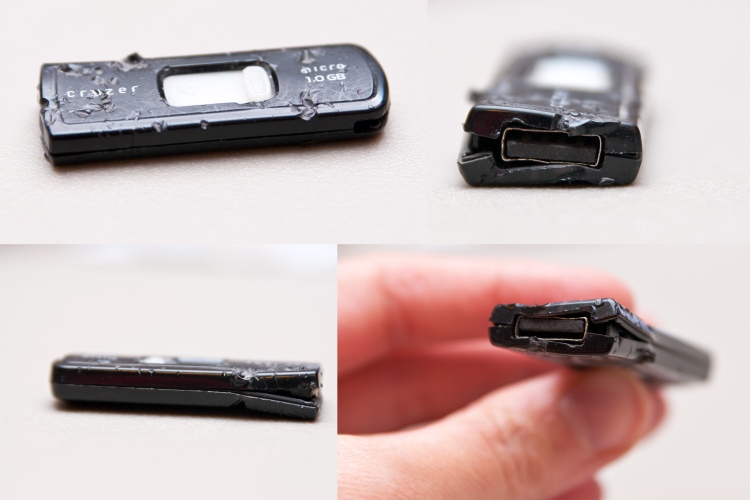 Evil. That dog is pure evil.

He’s lucky that I am a rational person and that I was able to take the jumpdrive apart, bend the metal back just enough to get it to plug into my computer and save all of the data, or that jumpdrive might have very well been Indiana’s last meal. I didn’t want to be known as the professor who showed up to class and had to admit to her students that she didn’t have any of their handouts or notes because her buddy’s dog ate her homework. And luckily, I didn’t have to.

I have to admit, I’ve tucked the jumpdrive away and have been holding onto it for the past, wow, four years now. At first, I held onto it just because it made for a funny story, and with a story like that, it’s nice to have some physical evidence to illustrate. Later, I got to thinking that maybe I would just use it as leverage someday against Foerth. You know, like if he tries to deny that his dog is the devil. Or, if I find a girl that I think would be perfect for him, but he starts making excuses not to go out on a blind date, I could just pull out the old jumpdrive and tell him he owes me one.

But, now that I am really getting serious about this decluttering, I think it’s time to let the old jumpdrive go. All the files have been copied and deleted. The photos have been taken and entered into evidence. And the story has been told. Goodbye old jumpdrive.

And Indiana, I just want you to know that I still hate you.