Written by Lori RomanoPosted on January 12, 2012Leave a comment

Get ready to hate on me all you animal rights activists. Yes, this is a genuine alligator head… 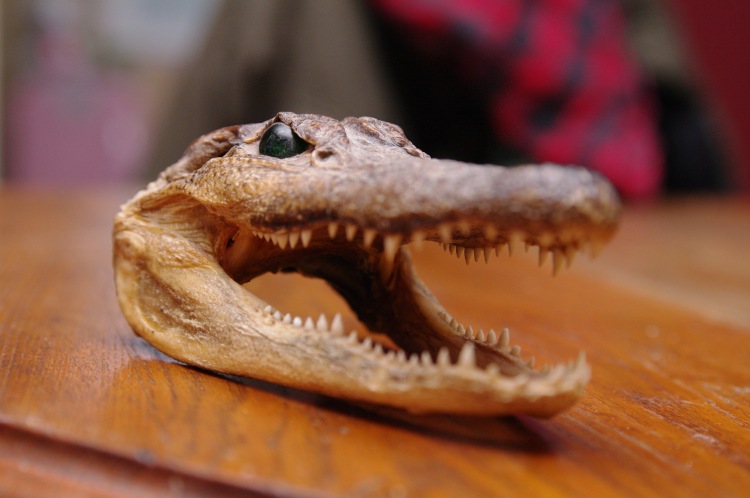 I bought it when I visited New Orleans for the first time back in 1997. A group of high school students from my church headed to the bayou for the ELCA Lutheran Youth Gathering, and this was one of the souvenirs I brought home.

Yes, it was an impulse buy. Had I not just eaten a plate full of alligator in a restaurant, I might not have made such an odd purchase. But, what can I say? New Orleans does strange things to people. It’s like some crazy voodoo magic.

If it tells you anything about the level of security in the airports in the 90’s, Mr. Gator traveled in my carry-on bag, wrapped in a pair of socks and a plastic grocery sack, and the TSA agent didn’t even bat an eye when my bag rolled by on the x-ray screen.

After returning home, Mr. Gator earned himself a prominent place on my bookshelf, and stayed there ever since. He traveled with me when I moved to New York, then to Arizona, and back to Nebraska. Each time, he has been unpacked, dusted off, and displayed.

I found the box where Mr. Gator had been packed away in bubble wrap. I pulled him out, set him on the floor, and emptied the rest of the box. When I got up to put a clock up on a shelf above the couch, I accidentally stepped on him and heard a loud crack.

Poor Mr. Gator. I’m not even going to post a photo of the aftermath. I’d like to remember him in his glory. RIP Mr. Gator. My shelf will be a little emptier, and you will be sorely missed.