I loved whittling. I could spent hours skinning the bark off a stick and making the wood underneath even and smooth. Had I actually been able to get my hands on a decent sized piece of wood, I just might have been able to whittle me a semi-realistic looking animal or something, but usually I was just whittling small sticks that I found in my backyard. When I was particularly motivated, I even tried to make myself a bow and arrow, though I could never get my crooked arrows to fly very far since my bow was nothing more than a broken tree branch and a piece of kite string.

Oh well, I had fun anyway.

It’s funny that I never actually owned a pocked knife myself when I got older. I guess I just never thought I really needed one. Plus, at the risk of sounding sexist, it was always just sort of a guy thing. I mean, sure, I always wanted to borrow my dad or my grandfathers’ knives, but part of the draw was that the knives were theirs. They were always well-worn and broken in and warm from their pockets. And I could use them as much as I wanted, as long as I was careful and took good care of them and gave them back when I was finished. It was just one of those little things that we could share.

The first time Steven came to spend the Christmas holiday with my family in Nebraska back when we were dating, my dad and I decided to buy him a pocket knife for Christmas. It was just one of those things that he didn’t have and always said he could use, but he never got around to buying for himself. Dad and I headed to the Cabela’s store in Kearney, and picked out a black Swiss Army Knife that we thought would be right up Steven’s alley. It had a couple knives, a file, a corkscrew, a bottle opener, a can opener, a pair of tweezers and a toothpick. 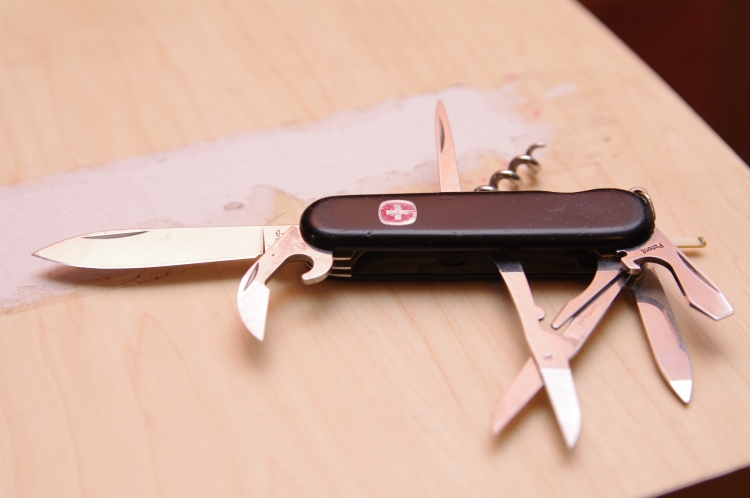 It was a great little knife, and Steven loved it. He took to carrying it in his pocket with his keys, taking almost everywhere with him for the next couple years. It came in handy for cutting open mail and packages, for opening beers as we tailgated in the parking lot before Mets games, for just about anything we needed.

I’m not even quite sure when it happened, but sometime before we left New York in 2007, something on the large blade of Steven’s knife broke, causing it to hang loose from the handle and fall out of place after you closed it. Like this… 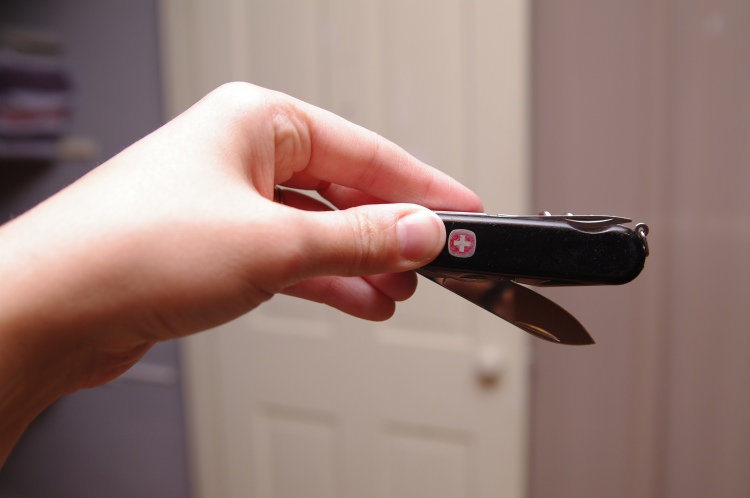 Nothing we could do seemed to help make it fit tightly in place again. Steven seemed perfectly content to keep carrying it, but I made him put it in his desk drawer for safekeeping instead. The last thing I wanted to do was to rush Steven to the Emergency Room if the blade popped open in his pocket and severed his femoral artery or punctured one of his testicles.

No way Jose. We’re not taking any chances.

We probably should have just gotten rid of the knife then, but we kept it around thinking that it was still useful…just not safe to carry. Of course, once it got buried in the desk drawer, all hope was lost. It has actually been MIA since the move in 2007.

When I ran across the old knife tonight, buried deep in a drawer of the office caddy, Steven’s response was, “Oh, hey, where’d you find that? I’ve been wondering where that was.”

I just shook my head and threw it in the garbage before he could come up with any excuses to hang onto it any longer.

And he calls me a packrat. 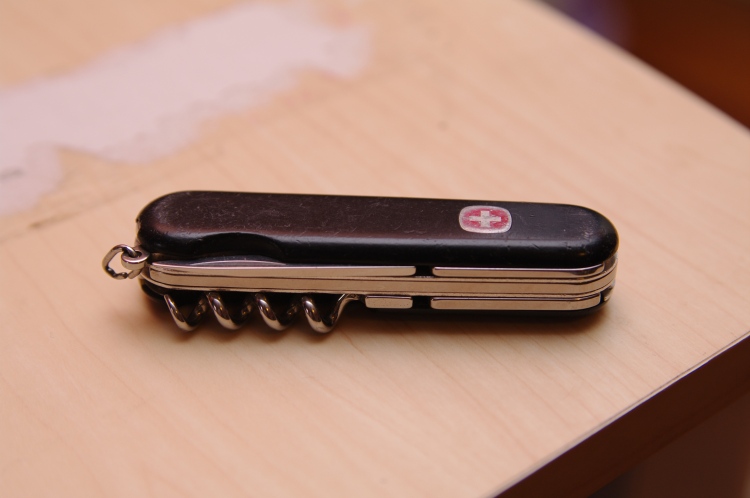