Parenting: A Surefire Guarantee Against Boredom

There are a whole lot of people out there who genuinely believe that once you have kids, your life gets “boring”. Obviously, these people have never spent any time with a 2-year-old.

Don’t get me wrong, there are things that definitely become more mundane when you have kids. Date nights consist of lounging on your own couch and praying that the kiddos stay asleep while you try to keep your eyes open long enough to finish the movie you rented from the Red Box at the local Walgreens. And the days of turning a rowdy 5-hour marathon of MarioKart into a margarita-guzzling, loser takes a shot drinking game have morphed into more of a have-a-beer-or-weak-cocktail-and-keep-an-eye-on-the-kids kind of evening.

But boring? No way. Life is anything but boring with kids in the house. In fact, I’m starting to believe that having a kid or two in the house is a surefire guarantee against boredom. I’d tell you about a “typical” day, but that’s damn near impossible. There’s no such thing as typical when kids are involved.

Today’s craziness started just after breakfast this morning when Cadence decided to start jumping on the giant beanbag like it was a trampoline. We’ve been telling her to knock it off and be careful for weeks, but she doesn’t listen. Some days she even takes to divebombing onto the beanbag from the couch. Well, today her luck finally ran out. She stepped a little too close to the edge, and all of a sudden I watched her flip, head over heels, and fall face first off the back, cracking her face on her potty chair on the way down.

It took all of 1.3 seconds for me to jump out of my chair and pick her up, but of course she’d already begun to wail. She was more frightened than anything, and the tears didn’t last more than 30 seconds, but that was about the same time that her nose began to bleed. Three tissues and a few drops of blood on my shirt later, and all was right with the world again, just in time for Steven to come home for lunch.

After running a few errands and putting Cadence down for a nap, I thought the rest of the day might pass uneventfully.

There I go, thinking again.

Instead of napping, Cadence decided it might be fun to play around in her crib for an hour or two and fight sleep. Oh well, I didn’t mind. I spent the time listening to her chatter and catching up on some work. Finally, when the stench of a stinking diaper began to waft down the stairs, I went to get her up and changed.

The first thing I noticed (besides the acrid smell) was the fact that she appeared to be chewing on a large wad of gum. She complied when I asked her to spit the wad into my hand, and I discovered that it wasn’t gum at all, but a large ball of wet, slimy paper.

Then Cadence turned her head and I realized that it wasn’t just paper, it was the Miss Piggy sticker she’d been carrying around the house the past few days. Apparently, she’d smuggled it into her crib at some point and had spent the last hour carefully peeling the picture off the sticky backing. The picture had been shoved into her mouth and masticated to the point that Miss Piggy was now a slimy, colorless blob. And the sticky back? Well, that was now tangled in a mass of hair just above her right ear.

I stood  for a moment, trying to decide if Miss Cadence could actually rock a girlish mohawk, or if a pixie-style cut might be in order.

It took a few minutes of finagling, but I managed to get most of the paper backing out of her hair. The glue? That was another story. 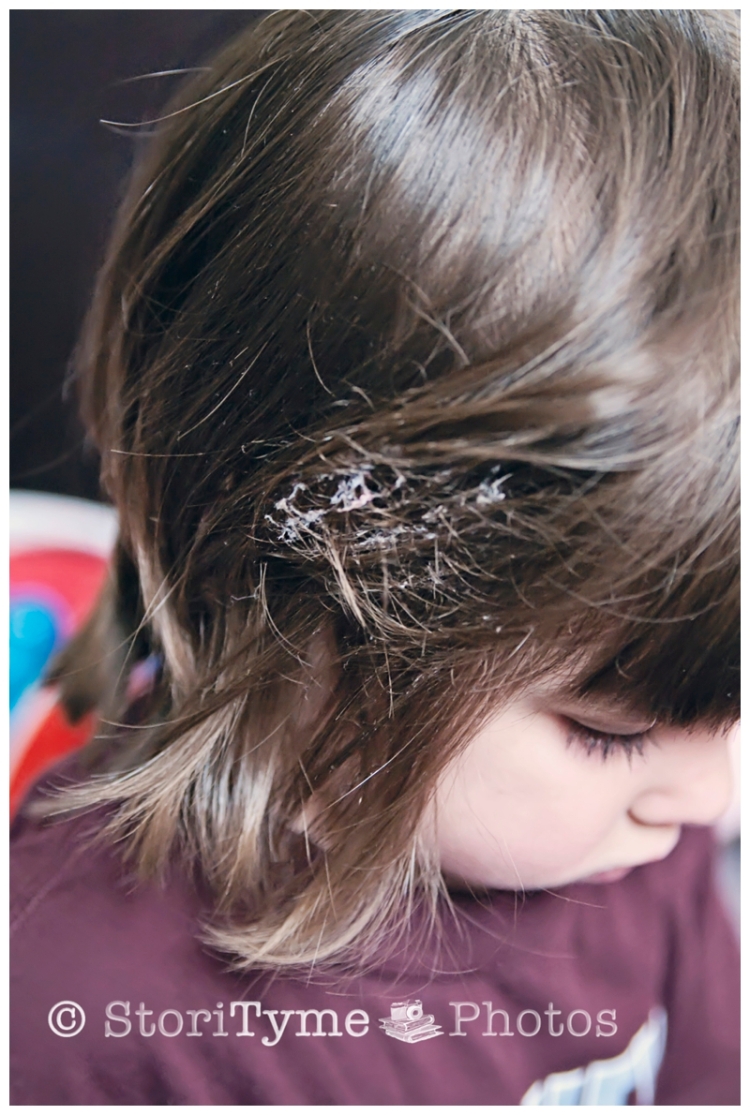 She let me mess with it for all of five minutes before she got really mad and threatened to declare war. So, I let her go play, figuring Steven and I could tag team her when he got home.

Of course, at that point, I had to break out the camera. I mean, I’d already slacked off getting pictures of the bloody nose and the actual sticker chewing/wearing, so the least I could do was get a few shots of my little messmaker with a big wad of glue in her hair. Cadence refused to actually look at me while I took the pictures, except for the brief moment when she tried to do a Jedi Mind Trick.

“This is not the messy child you’re looking for. There is no glue in her hair.” 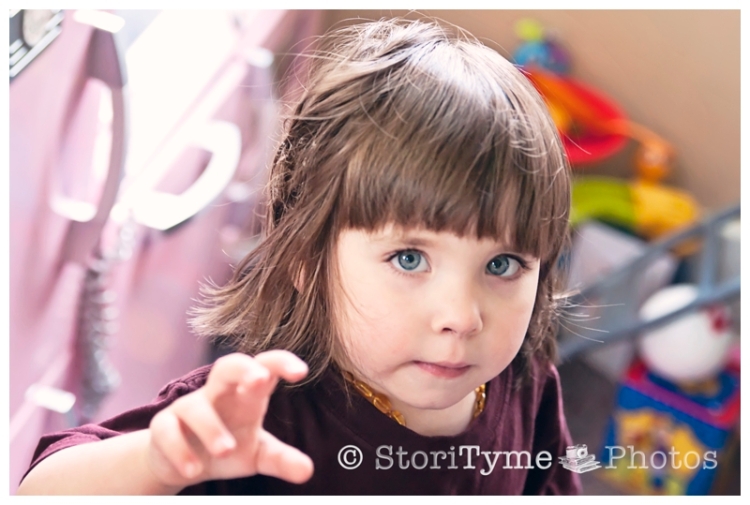 I swear, she almost got me. The Force is strong with this one.

So tonight, after a particularly messy dinner of spaghetti and a fudgecicle for dessert (why not, right? She was getting a shower anyway), I rubbed down Cadence’s hair with some olive oil and sent her off to shower. Then, after a thorough washing and combing, she was glue free once again, just in time for bed.

Thank goodness, because this Momma is exhausted.

And you know I better get to sleep because tomorrow is a whole new day full of fun and surprises.