We exposed Cadence to all sorts of foods when she started eating solids. I bought just about every type of fruit and vegetable to steam and puree into baby food, and she gobbled them up. We even used to joke that she had sort of an unnatural love of anything green–broccoli, peas, green beans, zucchini, asparagus. Once I even picked up some lima beans, just to see if she’d eat them. Seriously, what kid likes lima beans? Cadence gobbled them up with a smile and immediately asked for more.

Now that she’s getting older, it seems Cadence has begun to understand the idea of “options”. 95% of the time, she eats what we eat at mealtimes. But when I make a crockpot of spicy buffalo chicken, or when Steven and I pour ourselves bowls of Fiber One cereal in the mornings, we like to give Cadence options. (Don’t get me wrong, this kid will devour a bowl of Fiber One faster than most adults and think it’s great, but we try to limit her, since we’re still the ones who have to change the diapers when all that fiber kicks in).

What Cadence doesn’t understand about options is that sometimes there are none. And it doesn’t matter how much you argue, whine, say please, holler, or demand, it’s just not going to happen. But she’s got a stubborn streak that runs deep, this feisty little girl of ours. I blame her Nonna and her Pawpoo both. Poor kid got a bit of a double whammy of stubborn from my side of the family, and even quite a bit from Steven’s. So, we try to roll with it as much as we can when she gets something in her head that she just won’t let go.

I’d pulled a recipe for Creamy Chicken Stuffed Shells off Pinterest that sounded like it would be a hit with the entire family. Cadence isn’t really big on eating a lot of meat yet, but when it’s mixed into a casserole, or stuffed inside a quesadilla or sandwich, she’s pretty good about it. She loves pasta, and last Thanksgiving she nearly ate her weight in stuffing, so I figured she’d gobble up the stuffed shells without hesitation. On the side, I served some steamed broccoli and veggies, two of her favorites.

When I put Cadence’s tray in front of her, I expected her to dig right in. After all, she hadn’t had a snack and hadn’t eaten since lunch, and had been harassing me to give her some crackers for the past twenty minutes. I knew she was hungry. So, you can imagine my surprise when Cadence took one look at the food on her tray and turned up her nose.

“Cadence, you have broccoli and carrots, and this is pasta with chicken and stuffing. Take a bite, you’ll like it.”

“No nasty. I no want it. I want chocolate pie.”

“Well, you’re not getting any chocolate or chocolate pie until you eat your dinner.”

Now, for those of you who don’t have your own children, or who don’t spend a lot of time around small children, there are two basic types of tantrums–the slow burn and the instant explosion. With kids, you never quite know what you’re going to get, and it’s the result of a very complex combination of mood, environment, energy level, hunger level, sugar intake, total hours slept, proximity to nap/bed time, and overall wellness, all mixed together in a very unique way by your kid’s overall temperament and personality. I never wanted to be one of those scientists who experiments with volatile chemicals or deadly contagions, but that’s precisely the environment you’re thrown into when you have a child.

Here’s a handful of live grenades for you to juggle. Try not to drop them.

For the next 10 minutes, Steven and I ate our dinner listening as Cadence’s protests grew increasingly ridiculous and shrill.

Then the tears began to roll. Big ol’ fake tears that she can somehow conjure on command by staring off into space for a minute and squeezing her eyes shut tight. I always wonder what it is that Cadence thinks about to get herself in character. You seriously would have thought she was dying of some horribly painful disease and chocolate pie was the only known cure. I swear this child is going to take Hollywood by storm some day with her performance skills…or at least land herself a role on a soap opera or TV drama.

Steven and I exchanged a glance and stifled our laughter with big bites of pasta.

I gave Cadence a warning. Knock it off and eat dinner or go to bed.

“No, Mommy! No! I need chocolate! I NEEEEEEEEEED CHOCOLATE!!!”

“And Cadence, I want you to know that since you decided to throw a fit and not eat your dinner tonight, you’ll have it for breakfast tomorrow morning.”

She just looked at me for moment, and I could see the little wheels turning as if she was already trying to figure out how she was going to weasel me out of a bowl of Fruit Loops in the morning.

Steven took her to the bathroom to brush her teeth, and when she came back, she had calmed down…mostly. She was still huffing a little and sticking out her pouty lip. I picked her up to carry her up the stairs and she said quietly, “Mommy, can I eat broccoli?”

“Nope. Dinner’s over. You’ll have broccoli for breakfast.”

The next morning, Cadence didn’t ask to eat immediately after she woke up, so I knew she must remember exactly what I promised would be on the menu. After the dinner boycott the night before, I was surprised that she held out until after 10:00 am before finally caving in and asking for breakfast. I pulled out the bowls of veggies and stuffed shells, warmed then in the microwave and sat them down in front of her. She was less than thrilled. 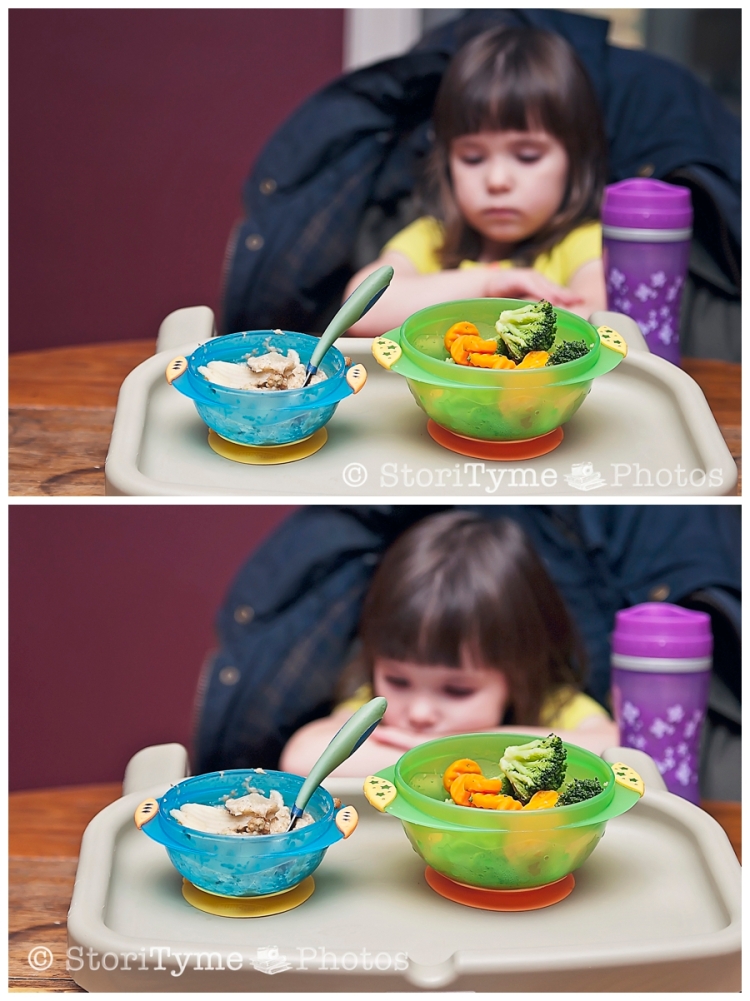 She sat for about five minutes, pouting, asking for cereal and milk, for a peanut butter sandwich, for crackers, for chocolate pie.

“No,” I said firmly. “This is your breakfast and you’ll eat it. And if you don’t, you’ll be having it again for lunch.”

The wheels were turning again, and a few minutes later, Cadence began picking carefully through the veggie bowl and eating the carrots, leaving the broccoli and pasta untouched. When she was finished, I wrapped up the uneaten portions and put them back in the fridge.

I took Round 2 as a small victory, but I was determined to win the war. Cadence may be stubborn, but so is her Momma.

Steven had to work through lunch, and I told him he was going to miss the action. He couldn’t believe Cadence was still holding out and wondered if he just might get to witness the epic battle for himself come dinner time.

I wasn’t sure if Cadence realized it yet or not, but I could play this game for days.

When lunch rolled around, Cadence didn’t even seem surprised when I put the tray of shells and broccoli in front of her. She didn’t protest or whine or ask for a peanut butter sandwich or a banana. She just stared at the tray. The wheels were turning.

I held my breath and waited for the explosion.

I watched her stab a forkful of the stuffed shells and raise it, ever so slowly, to her mouth… 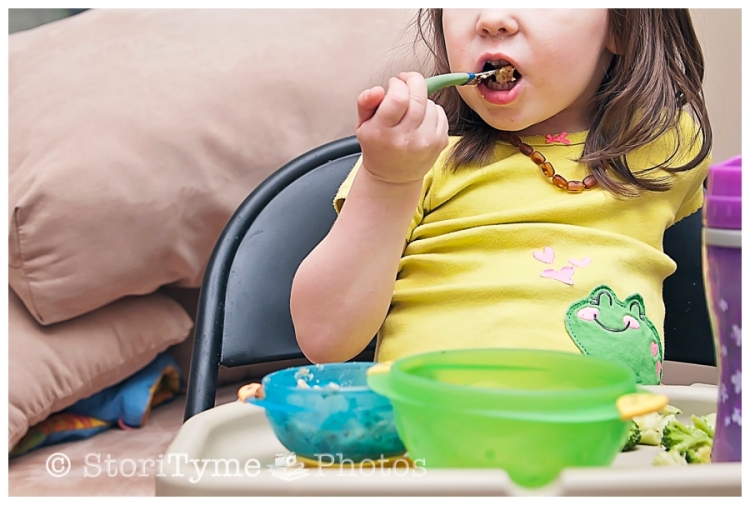 I just shook my head and laughed and watched my stubborn girl shovel pasta and broccoli into her mouth as fast as she could chew it. 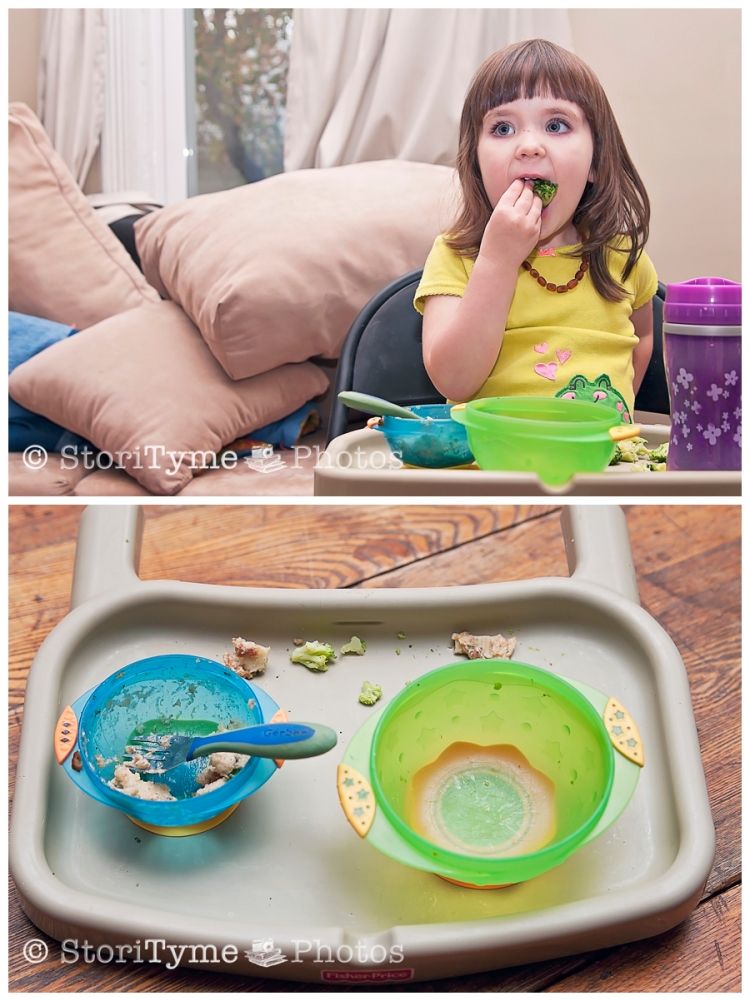 And just because I’m a woman of my word… 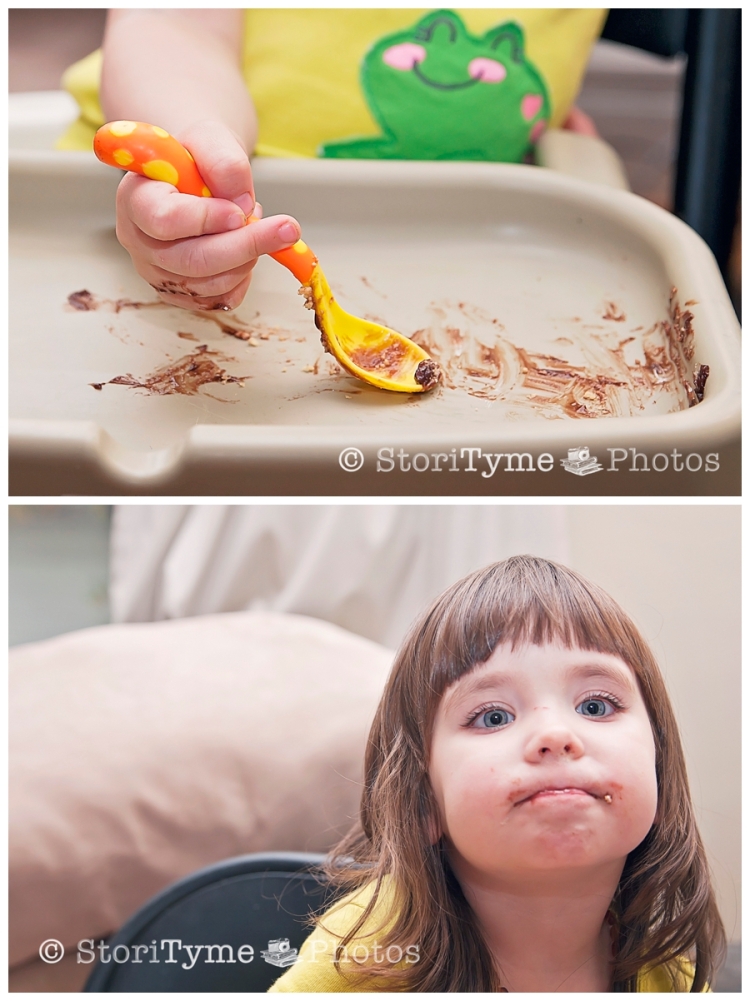