Music is one of the things in this life that I just don’t know I could ever live without. Life just doesn’t make much sense to me without a soundtrack. I think that if the human soul could ever truly be captured, caught in a net or bottled up in a little glass jar, the first thing you would notice is the sound of it–some sort of beautiful melodic vibration resonating from the inside out. I think there is music in all of us–in the way we think, the way we speak, the way we move. It doesn’t matter if you can’t play the piano or sight read a song. It’s there, somewhere, and it’s the reason that we can’t help but nod our heads and tap our feet and hum along with the radio. Music speaks to us in a way nothing else can.

I think it must be the writer in me that makes me so partial to musical theater. Sure I love rock concerts, and I can get chills sitting in the audience and listening to an orchestra. Hell, I sometimes even feel myself getting overwhelmed with emotion just listening to the way a hundred voices intertwine while singing hymns in church. I know, I’m a weirdo, but there is just something so inexplicably awesome that happens inside when there’s music involved.

And, for me, there is nothing more magical than musical theater. The story, the sets, the costumes, the lights, the colors, the way the actors moves as they deliver their lines. If there was ever a way to pluck a story directly from the brain of a writer and show it to the world, I think it would probably end up on a Broadway stage. It doesn’t matter how many times I’ve seen a show, whether I have memorized every word or could recite the story from beginning to end in exquisite detail, I always lose myself as soon as the theater lights dim. If there is anything that I am going crazy waiting to share with my daughter, it’s musical theater, because the way she loves music and movies and performing already, I know it’s only going to take one show to get her hooked.

Of all the shows I’ve seen (and seen over and over again) through the years, Wicked is at the very top of my list of favorites. Les Miserables is a very, very close second (which is why I am so obscenely excited for the new movie musical being released this Christmas), but there is just something about Wicked that caught me and refused to let go. I think part of me always thought there was just something a little too good about Glinda in the original Wizard of Oz story. I’ve never really been a pretty blonde, glitzy, glittery, dress-wearing princess sort of girl, so I knew that Glinda the Good and I would never really see eye to eye. I knew girls like her in high school and let’s just say they aren’t exactly on my Facebook Friend List.

I also think I always felt a little bad for the Wicked Witch. I mean, her sister dies in a tragic accident and some whining brat from Kansas comes along and steals her shoes. Nope, that just never sat well with me. So when Gregory McGuire decided to rewind the story and show the world what happened in the Land of Oz long before Dorothy and Toto landed there, and when the book was eventually adapted into a Broadway musical, I was right there in line for tickets. And what I love most is that it is not just a story about black and white or good and evil. Instead, like real life, it is a story about about the gray areas between the black and white, a story about friendship, betrayal, circumstances, choices, consequences, right and wrong, appearances and reality, standing up for what you believe in, and discovering (and learning to love) who you are.

If you’ve never seen it, find a way. If it’s possible to get a ticket, go. You won’t regret it. And now, I’d like to share one of the songs from the show with you, because it was the first thing I thought of when we woke this morning and discovered what our little Elf had gotten herself into while we slept. So, take a moment to watch before you continue…

After returning from her nightly visit to the North Pole to file her Cadence Report, Cosette was greeted by Cinderella Barbie who, after giving the little Elf a once over, decided that it was time for a makeover. Not that Cosette doesn’t look cute in her little red elf costume, but Cinderella Barbie just thought that maybe a fresh, new look might help Cosette overcome a little of her shyness.

Luckily, there were a few bags of old Barbie clothes packed away down in the cellar. Some were pretty dated (I mean, come on, it’s only been like a quarter century since I’ve played with a Barbie), but fortunately, some of the old fashions have been staging a comeback, so Cinderella was able to put together a little something semi-fabulous for Cosette. And this is what Miss Cadence found when she woke up this morning… 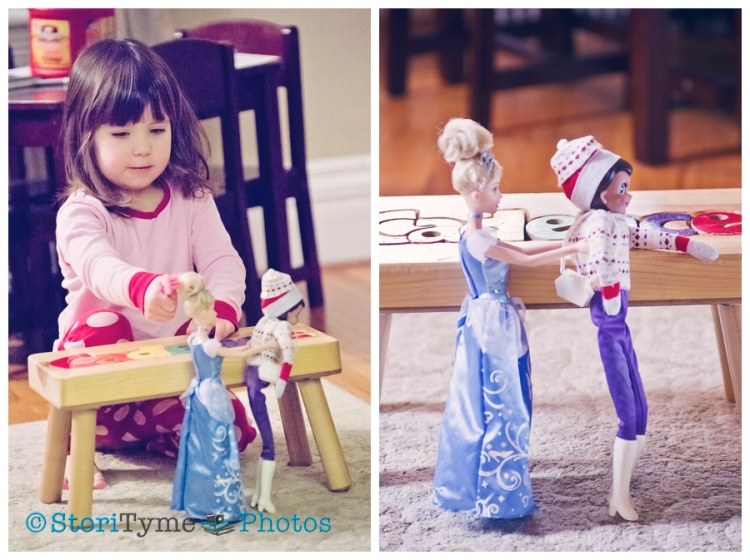 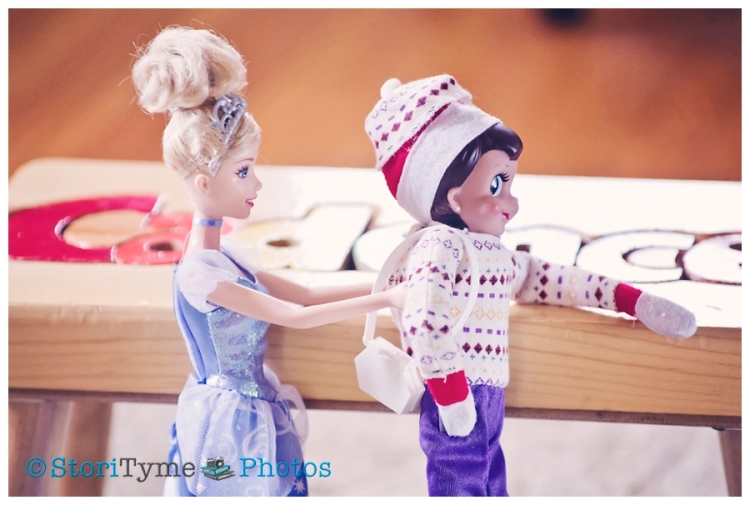 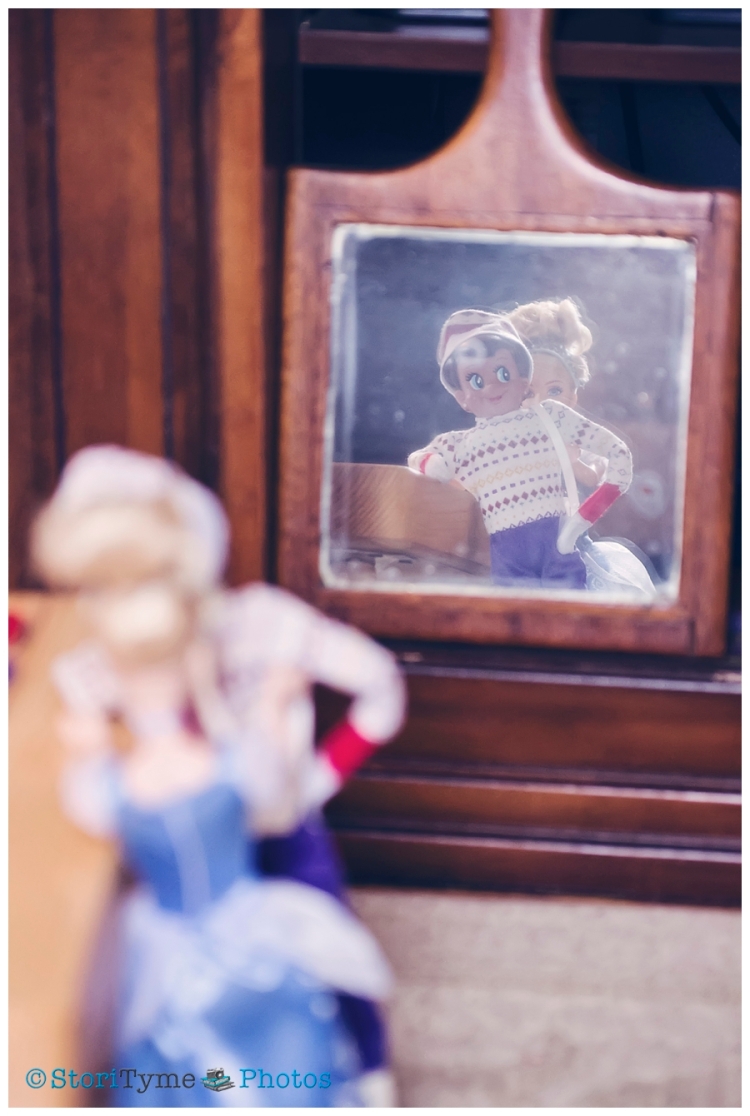 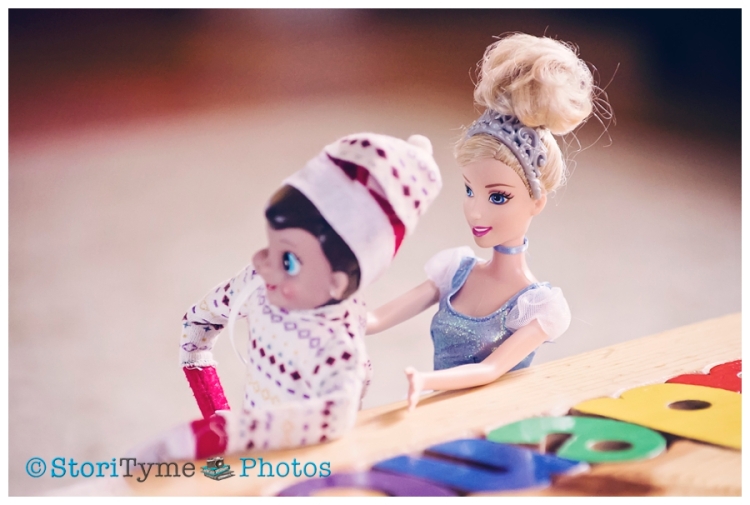