We Love You, New York

It’s been 13 years. I keep thinking that one of these days, it’s not going to hurt so much when they start rolling the footage of those airplanes flying into the Twin Towers. I wasn’t in New York when it happened. I’d hopped on an airplane just a few weeks before the attacks, putting a little distance between myself and my own demons as I took what would have been my senior year of college off to spend a little time with family and a whole lot of time in therapy.

I was sleeping in Texas when the first plane hit. My Aunt Leslie woke me before she headed out for work, saying New York was on the news. Something was happening.

At that point, no one really knew anything.

I stumbled to the kitchen to make some coffee, staring in disbelief at what was unfolding in front of me on the screen. At first I thought it must be some old movie footage, or maybe some sort of sick joke. The second plane hit and the tears began to fall. And as I watched the first tower crumble, I fell to my knees on the living room carpet, sobbing and praying.

Please, just let me wake up.

I was fortunate. I didn’t lose anyone I loved in those attacks. And yet, like so many others who woke to the horror that beautiful September day, the events have left an indelible scar.

From the moment I first arrived in New York as a wide-eyed 17-year-old co-ed, New York felt like home. The nine years I spent there were some of the best (and the worst) of my life. I lost myself, and found myself on those crowded city streets. I fell in love there. I learned to love myself there. In so many ways, New York made me whole.

I made it a point to visit Ground Zero as soon as I returned to New York in the fall of 2002. I’d spent that year cleaning up the broken pieces of my life, slowly healing from the years of self-loathing and depression. And as I walked up to the barricades surrounded the area that was still very much filled with rubble and ruin, it occurred to me that in spite of everything those evil men had done to destroy our city, our country, and the spirit of the American people, something beautiful and strong was emerging from the ashes. Because no matter how much darkness they might try to rain down on us, our individual sparks of goodness and light can never be extinguished. Not really. And so I made a point to visit Ground Zero every now and again for the next few years, to pay my respects to those who had been lost, and to renew my own belief in the resiliency of the human spirit.

Stevie and I visited Ground Zero shortly before we moved away from New York in 2007, and it wasn’t until just this year that we had a chance to go back again.

But this time it was different.

How do you explain to a 4-year-old what happened that day? As parents, so much of what we do is to protect our children, and I know that sometimes the first instinct is to grab them up and build a little bubble around them to protect them from the dangers of the outside world. And yet I know that doing so will only cripple them. Life isn’t rosy all the time. And somehow I believe that our job as parents is to teach our children how to cope with the things they face in this life–both the good and the bad. I believe that talking to them about some of the horrible things can help them understand, and make their own lights shine a little brighter.

And so, Stevie and Cadence and I hopped a train to the city on a humid Monday morning in July. We didn’t have much of an agenda. We wanted to try and hit a few of our favorite spots, find a good Black & White Cookie, and then head down to the 9/11 Memorial.

Cadence wasn’t sure what to think at first. She loved riding the train and the subway, but was a little overwhelmed by the bustling crowds as the noise as we approached Times Square. Though it had always been one of my favorite spots to people watch and wander, I was sad to see what Times Square had become–a chaotic, seedy spot filled with pushy panhandlers dressed in dirty knockoff Disney costumes. We indulged Cadence with a couple quick photos, and then left it behind. We walked to Grand Central Station and showed her around, then hopped a train uptown to take some photos in front of the Metropolitan Museum. Afterward, we let Cadence blow off some steam at a playground in Central Park. 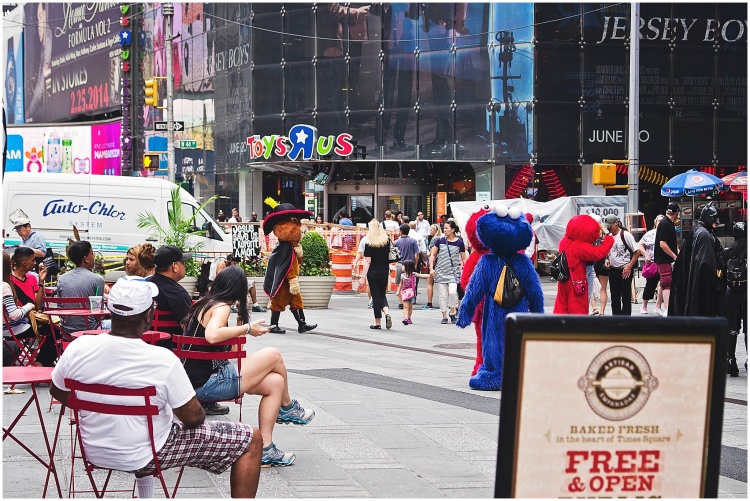 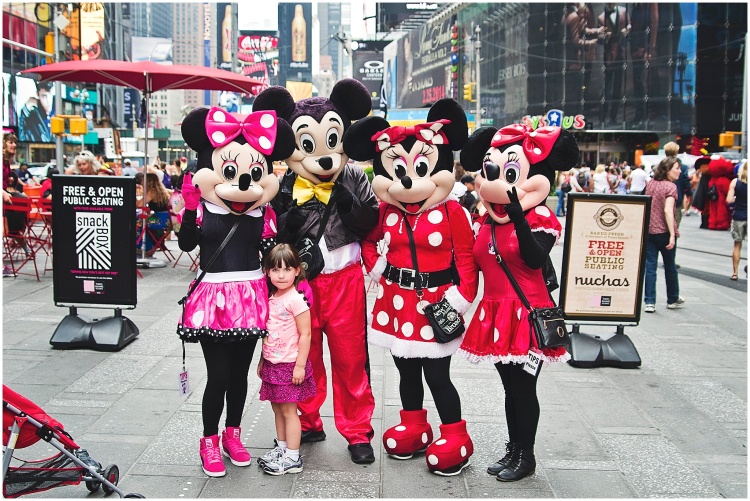 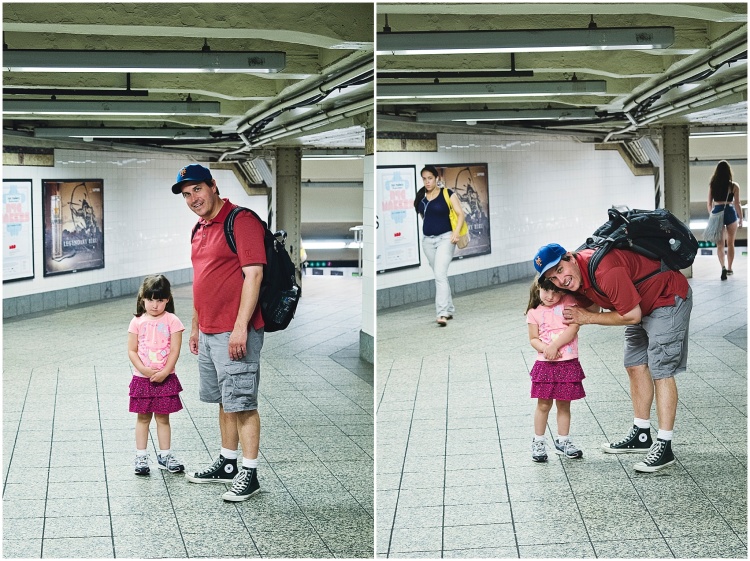 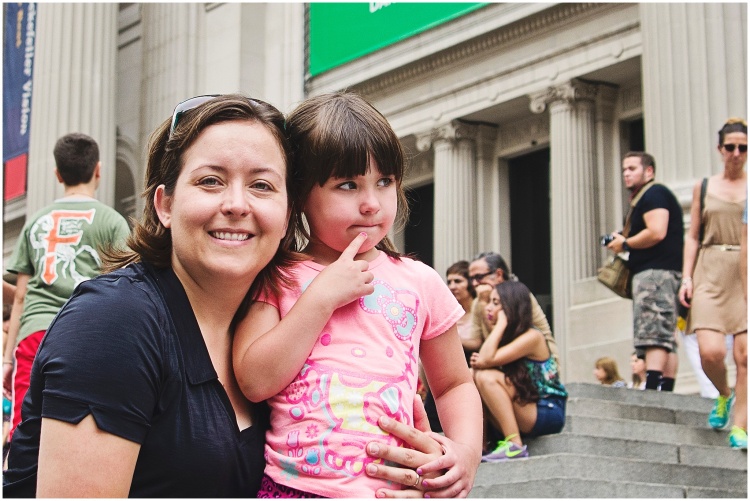 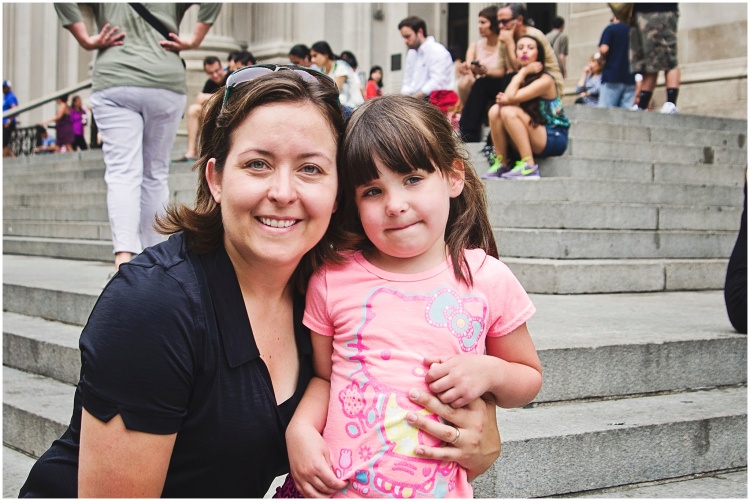 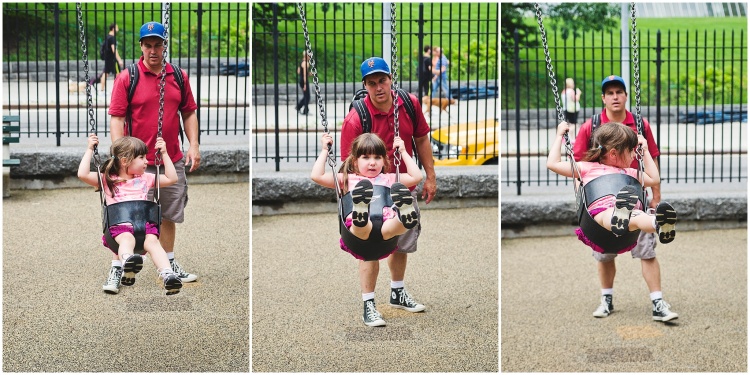 It was another short walk to the subway that would take us all the way downtown. We found a bakery on the way, and demolished some Black & Whites before heading down to the Memorial. 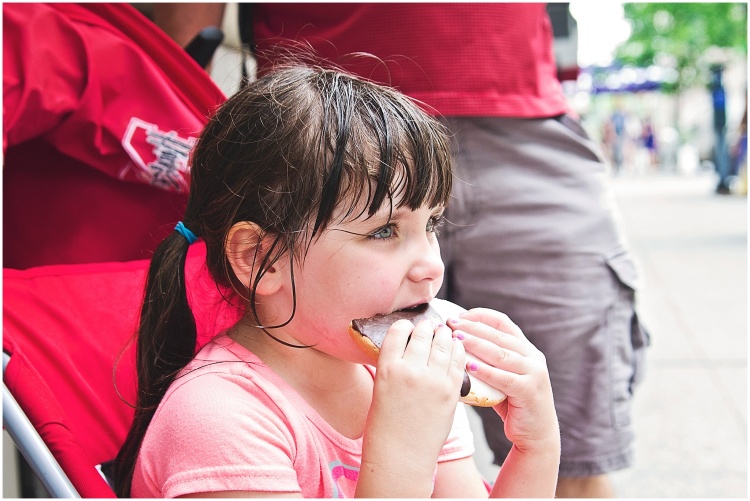 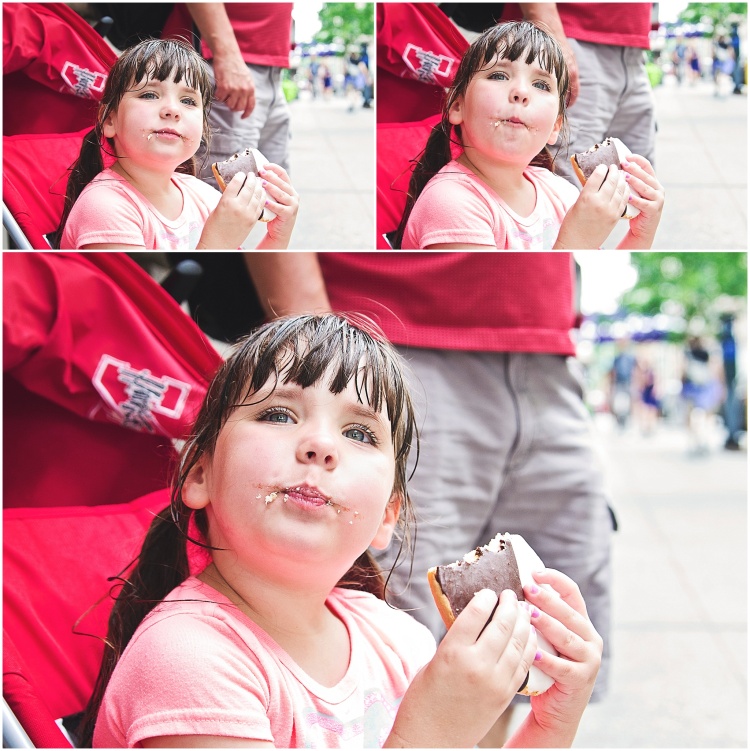 Emerging from the subway, we were surprised to still see so much of the area barricaded. It had been 7 years since our last visit. I guess we’d just assumed that enough time had passed for everything to be made whole again.

Each time I visit, I find myself marveling at the stillness. Right there in the middle of the city that never sleeps, in the middle of the chaos that is New York City, there is an eerie silence that seems to have permanently settled over Ground Zero. The Memorial was packed with people–tourists and police and volunteers. We wove our way through the crowds, collecting an informational pamphlet and a couple of bracelets.

We Will Never Forget. 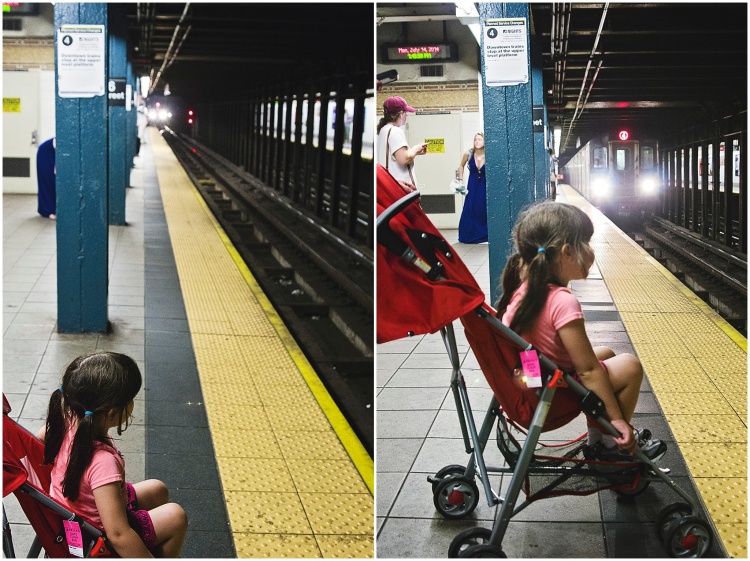 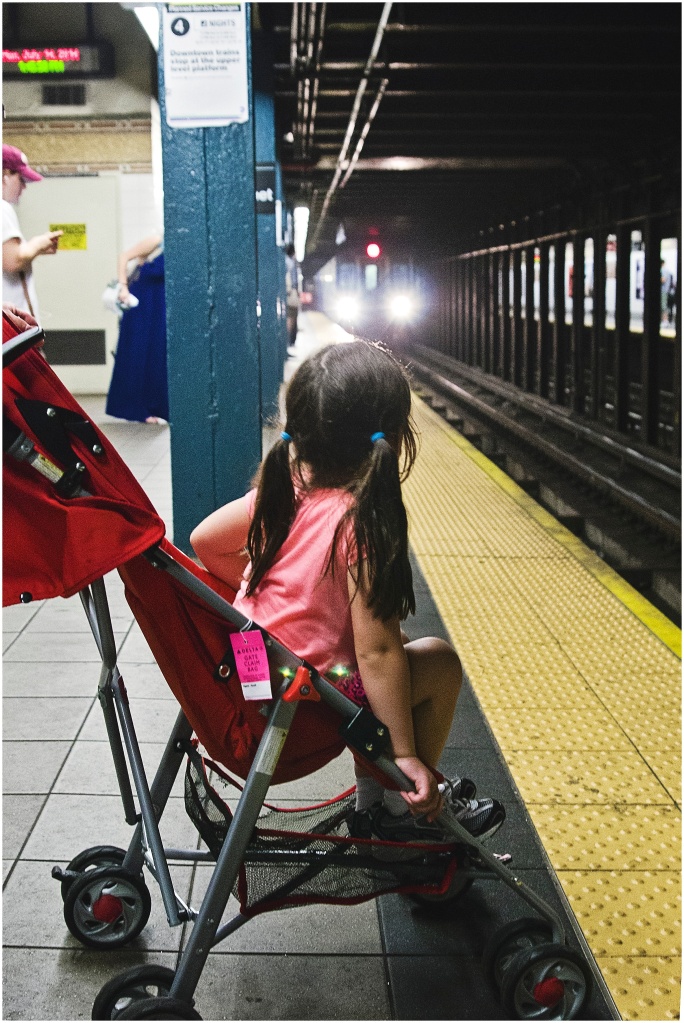 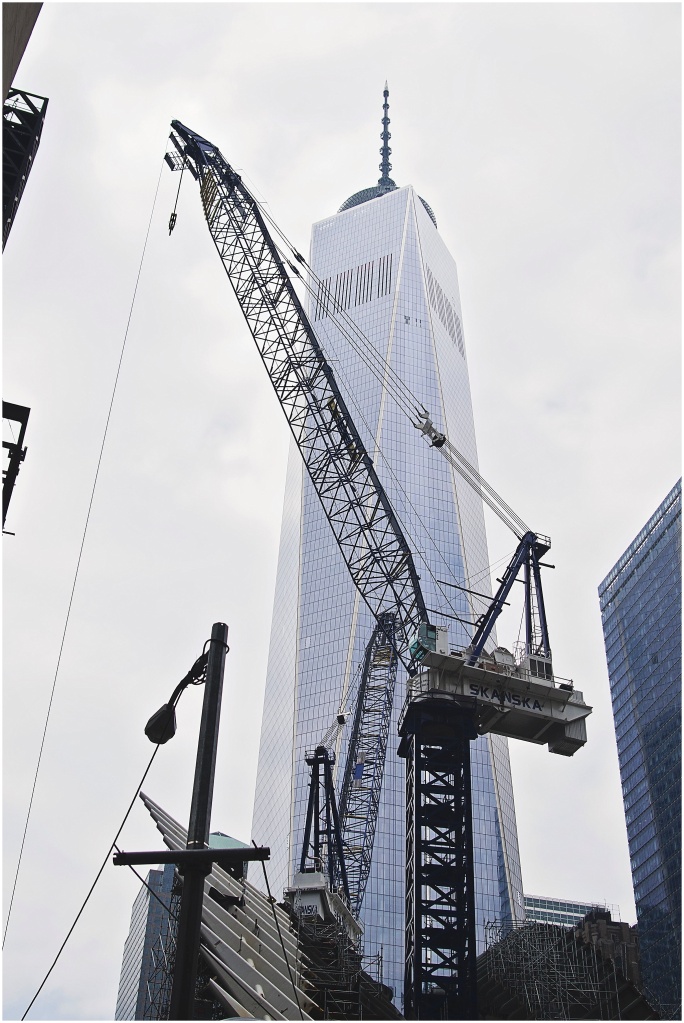 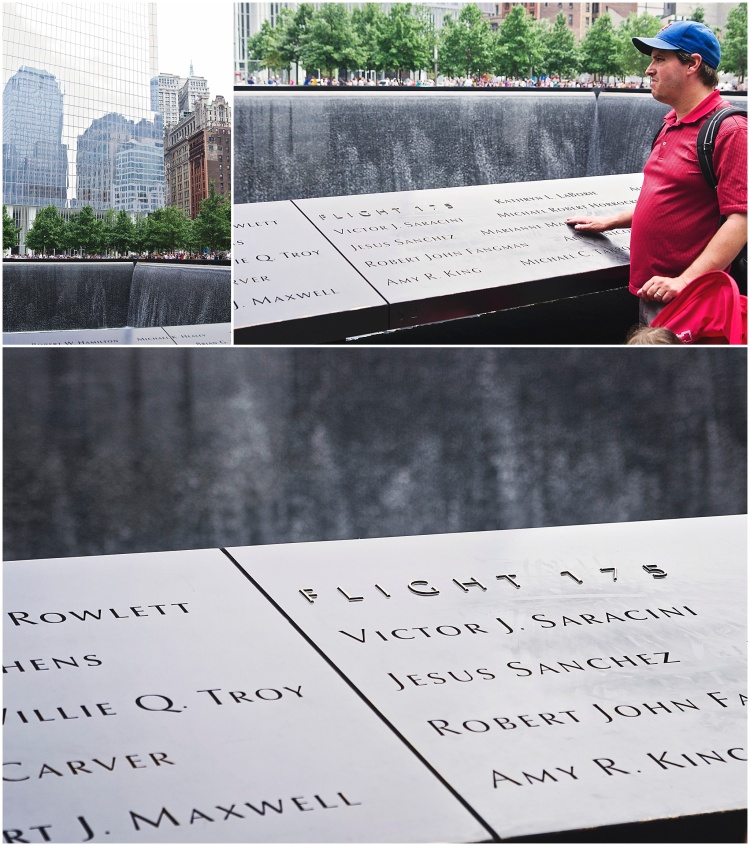 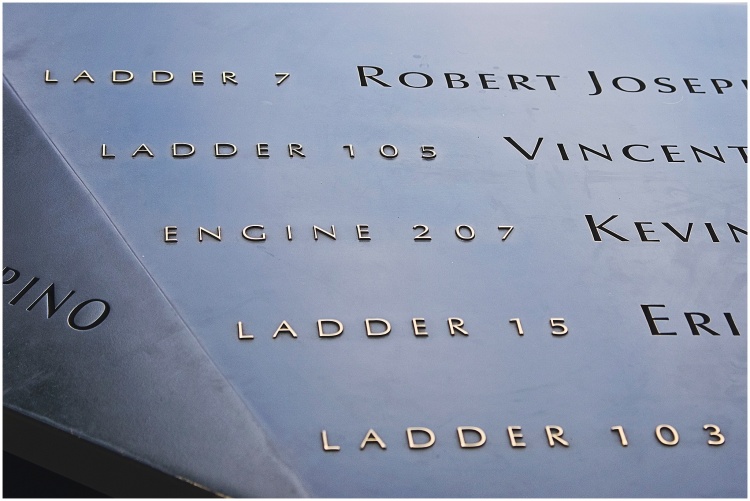 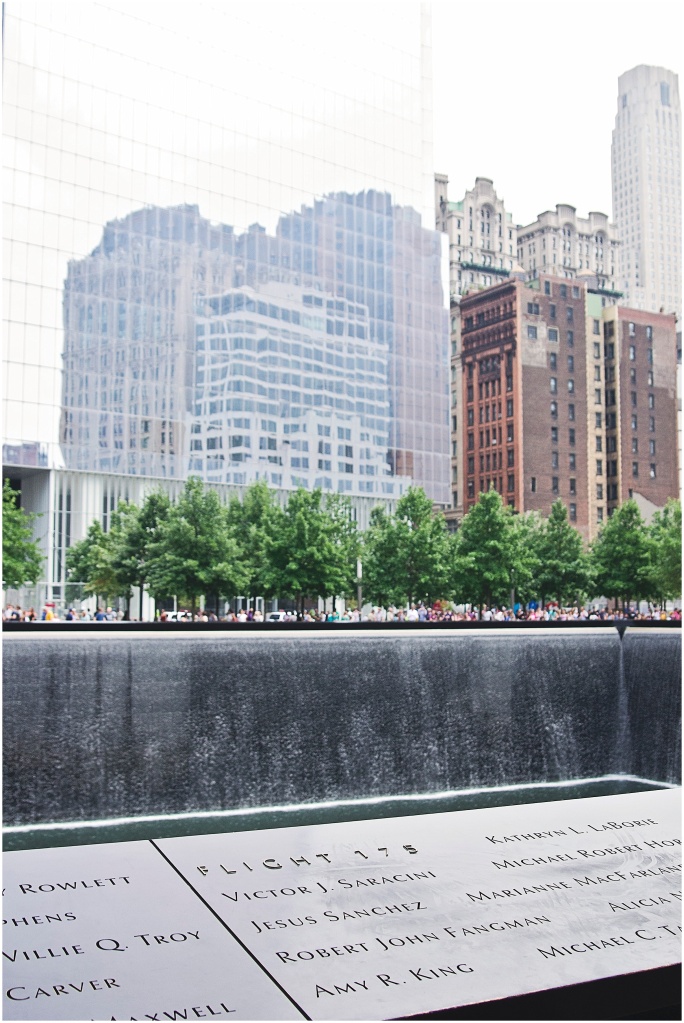 As we approached the first reflecting pool, we stopped. Steven and I knelt down and began to tell Cadence the story of the two tall buildings that used to stand where the water now fell into the gaping holes in the earth. We told her how some bad men stole airplanes and crashed into those buildings because they wanted to hurt people. We told her how a lot of people, brave men and women, police and firefighters, hurried into the buildings to try and help the people who were hurt. And we told her that a lot of people died when the buildings fell down.

She was quiet, studying the scene around her, looking at the pictures of the Twin Towers in the pamphlet.

“Mommy, did you die in the building?” she asked.

“No baby. I didn’t. But a lot of other Mommies and Daddies did. And they built these waterfalls and made this place for everyone to come visit so we can remember the people who died here.”

She didn’t want to talk about it anymore. But I watched her big eyes drinking it all in as we toured the site. She traced the letters of a name with her finger, and then gave her Daddy a hug and laid her head on his shoulder as we paused in front of the pool where the North Tower once stood.

This morning when we woke, the footage was already playing on the news. Cadence pointed immediately at the screen.

We love you, New York. We will never forget.