Yep, still behind blogging. Still sick. Well, getting better, but I’m still coughing enough that my voice is all hoarse. But guess what? We’re still rockin’ with these elves, and Cadence is excited to the point that she swears the elves keep moving slightly every time she walks in and out of a room.

She asked tonight if we can start taking time lapse photos of them throughout the day. Of course I had to shoot that one down. Moving the elves once a day is enough. Moving them multiple times a day just sounds like way too much work.

I mean, we have a dog that has to eat 5 times a day. We’ve gotta start drawing some lines somewhere.

December 12 – Leo and Cosette decided to put on a little impromptu concert.

December 13 – In honor of the new Star Wars release, Leo and Cosette thought it would be fun to dig out Stevie’s Naboo Starfighter and take it for a spin. Henry thought it was pretty cool to see the elves flying around, and Cadence was just in awe. 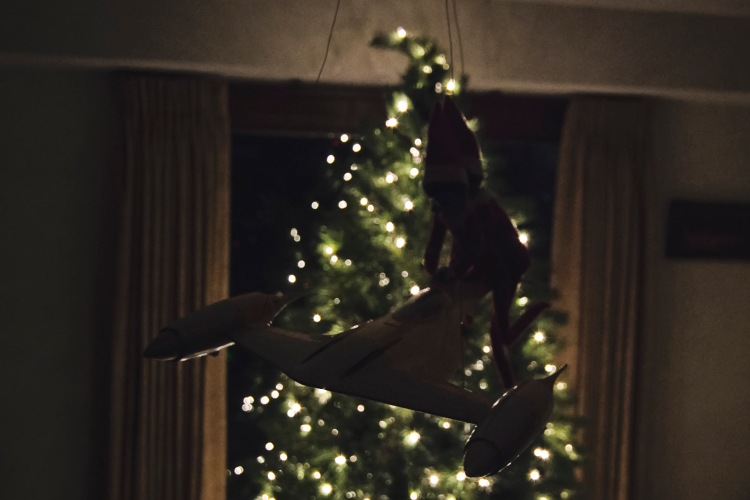 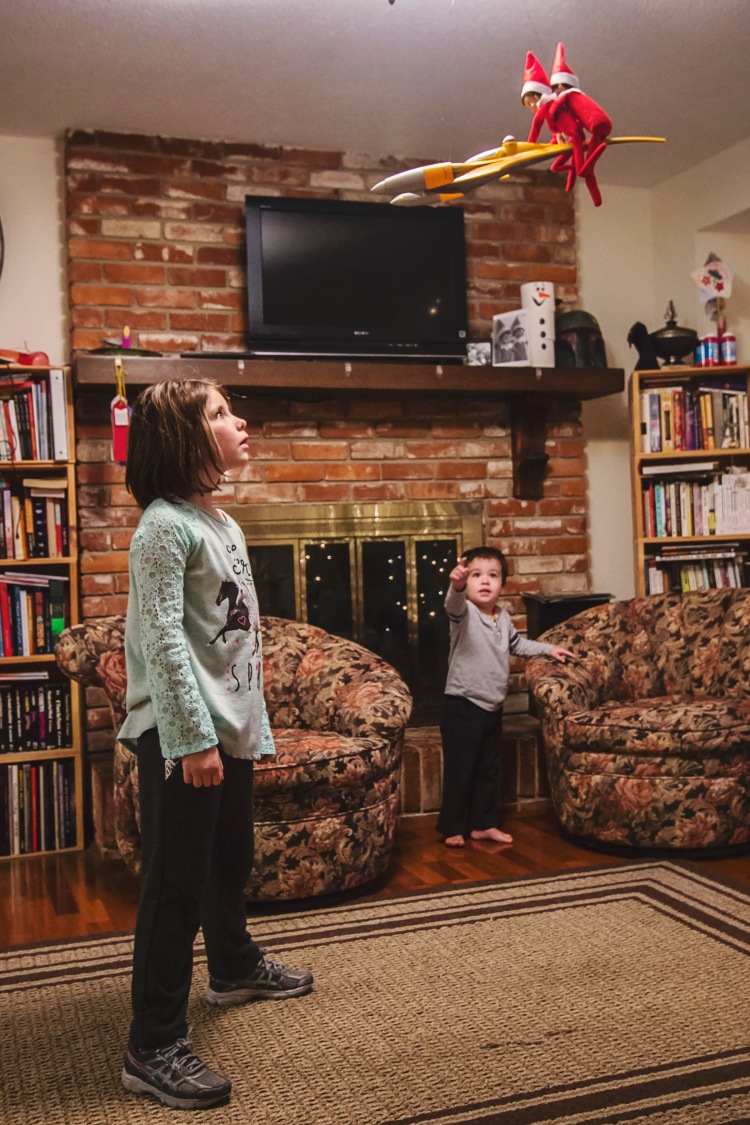 December 14 – This morning, we found the elves locked in the dog kennel. And we’re not sure if that’s what started Henry’s sudden meltdown, but five minutes after getting out of bed this morning, he was suddenly screaming and crying and shaking and seemed absolutely petrified, but couldn’t seem to tell us what he was so afraid of. He kept pointing at the door and telling us he wanted to get in the car, so we hurried up and got him ready for school and headed out the door. As Stevie was buckling him into my car, Henry finally told him he was scared of the robot.

Here’s the thing, folks. Stevie got himself a new Roomba sometime last year. In a nutshell, we hate vacuuming. We both have jobs. We’ve got the kids and their activities. We’ve got this crazy dog. And a million other things that seem to be going on constantly. We like to have a tidy house, but in the grand scheme of things, we can probably think of about 157 other things we’d rather be doing than cleaning. So the fact that there is a robot we can buy that will vacuum our house every single day if we want? Sign us up!

At first, Henry was intrigued. In fact, as soon as he could walk, he was pretty much obsessed with finding the robot and touching it and trying to press the buttons. And yeah, we may have told him not to touch the robot because it would get him.

Dammit, when you’re a parent and you’re tired and you just want your toddler to listen, you’ll say all sorts of crazy things.

Fast forward a year and all of a sudden Henry is deathly afraid of the thing. If he hears a beep that sounds like the Roomba, he screams and runs and tries to climb you. If he walks in a room and sees the Roomba sitting there charging, he backs out slowly and then runs for his life as soon as he’s out the door. And some mornings, like this morning, he wakes up and just thinks about the Roomba and manages to freak himself out.

So we spent the entire ride to school talking about how the Roomba is a nice robot and that it won’t get him and that we love the Roomba because it cleans up messes and keeps our house clean. And we talked about all the other nice robots we know–R2-D2 and C-3PO and BB-8 and Baymax.

By the time we got to school, all was right with the world again. And by the time he got home tonight, he’d forgotten all about it.

Life with toddlers. Every day is an adventure.