Crazy end to a crazy week.

December 15 – I woke feeling better and with my head clearer than it has been in more than a week. Seemed I was finally kicking the cold for good. Stevie and I were up and showered. Cadence was getting ready. I went to get Henry out of bed so he could have some breakfast before school. We were even running a little early, so it was a nice calm morning…

Nice and calm right up to the moment where Henry let out a sudden wet belch and then promptly began to vomit.

Something sort of crazy happens to your brain when you become a mom. Things that would normally incite panic or turn on that “flight” instinct suddenly trigger the brain to intense moments of laser focus where Moms are momentarily imbued with what can only be described as superpowers. Our kids come to us with bleeding wounds or broken limbs or pale, sickly faces and we suddenly become iron stomached combat medics who can field dress wounds and manage to keep a half-gallon of chunky, sour-smelling vomit from hitting the carpet by catching it in our own bare hands.

And in my case yesterday, I managed to catch 99% of it with my hands, shirt, and down the whole right side of my pants.

Stevie hurried in from the kitchen with dish towels, and hollered at Cadence to grab us a bowl or bucket. She panicked and grabbed the smallest sauce pan she could find in the cupboard. We thanked her for helping and sent her back for more towels. We managed to carry Henry in to the kitchen where we could get his shirt off (somehow the kid managed to escape with just a little vomit on his sleeves), and then we set him in the sink so we could contain any additional mess while I hurried upstairs to clean myself up, start a load of laundry, and call in to work.

Henry and I spent the rest of the day in the recliner watching movies and sipping water. He ran a fever of 100-101, but luckily that one eruption was the last of the vomiting. Stevie took Cadence to her swim meet (where she took 3rd in two strokes and managed to shave more off all of her times again). Then he headed out to see Star Wars. It was supposed to be a date night, but there’s no way I could ask a sitter to come and take a chance of this being contagious, so the kiddos and I hung out at home and laughed at the pictures Stevie sent of himself from the theater hanging out with R2-D2 and other fans dressed in costumes.

With all the excitement, we darn near forgot about the elves, until Cadence found them hiding in the freezer sneaking popsicles. 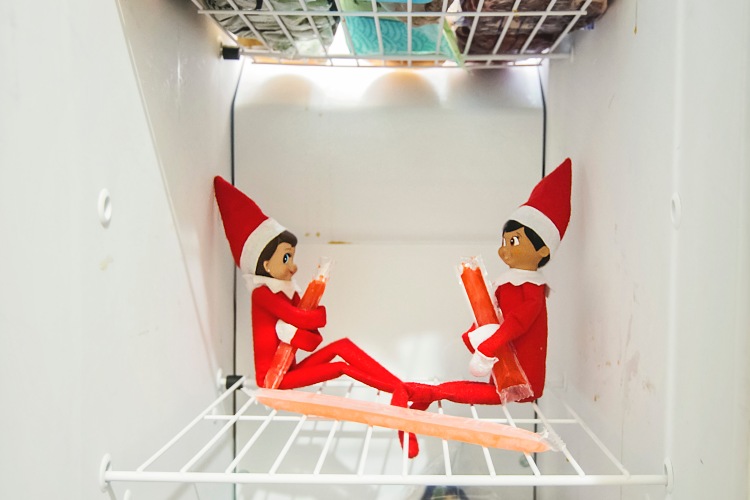 December 16 – Today, Henry woke still running a low-grade fever which translates to him being little extra whiny and clingy, but otherwise he seems to be on the mend. No more puking (thank God), and other than a little runny nose, there doesn’t seem to be anything else bothering him. We decided to make it a lazy day, and just hung out at home. Cadence headed to a friend’s birthday party this afternoon and I ushered Henry up to take a bath before nap time. We found the elves had done a little decorating in the kids’ bathroom. 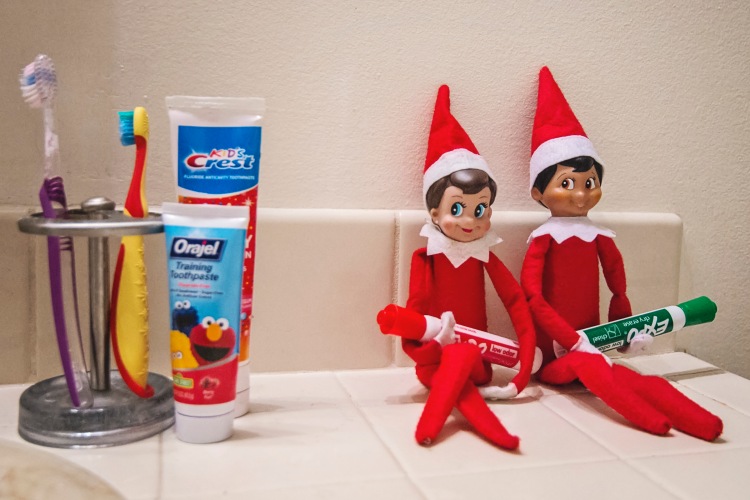