Written by Lori RomanoPosted on March 31, 2019Leave a comment

I know I’ve written at length about my love of theatre before, so I won’t spend too much time rehashing it again. Just know that when I say I’m obsessed with live theatre, I’m not exaggerating, particularly musicals. I’m mesmerized by the talent of the actors and musicians, and absolutely astounded by the sets and lighting and costumes that make the productions come to life. If I had unlimited funds, I’d buy a seat at a different show every night–Broadway, Off-Broadway, community playhouses–I’m in for it all.

When I first saw ads and TV spots for the new show Come From Away, I knew I needed to see it. I’m always drawn to stories of the “helpers”–the people who show up in the face of loss and tragedy to help recover and rebuild. If you’ve looked at any of my social media feeds in the last two weeks, you’ll see the dozens of stories I’ve been posting of exactly this type of selfless compassion taking place right here in my home state in the wake of the devastating Midwest floods.

But even more than that, it’s the story of Beverley Bass, the first female captain of an American Airlines aircraft–a woman whose persistence and tenacity helped break down barriers, a woman whose dream of flying led her to the sky. And with a long line of strong women in my own family (including my Grandma Kay who was one of the first females to fly for US Airways), this was a story that spoke to me on a very personal level.

Mom got us tickets and we headed to the Orpheum this afternoon for the show.

And I gotta say, folks…I might have a new favorite show.

Anyone who knows me knows that I’m not an overly-emotional person. I tend to let a lot of things roll off, and it’s not often that my emotions really get the best of me. But every now and then, something that hits really close to home will choke me up, and there were several moments during Come From Away that I found myself tearing up and taking deep breaths to keep it under control. Anything 9/11 related always hits me hard, and in the opening moments of the show when they sing about remembering exactly where they were when the news broke. Yep, that got me. Then later when the beautiful souls in Gander, Newfoundland began to open their lives and their doors and their homes to the airplanes full of strangers without a second thought or a moment’s hesitation. Yeah, you know that got me too.

It just seemed fitting (one of those moments when the universe perfectly aligns) that I was watching this show today while this same sort of selfless compassion is happening all around me right here in Nebraska in the wake of the devastating floods just as it happened in the hours and days and months that followed the attacks in 2001.

And it’s moments like these that make me really happy to be alive and be a member of this human race.

If you believe everything you see on TV, you might have a pretty grim view of humanity. But if you can tear yourself away from the 24-hour news cycle and get a glimpse of the things that are happening right outside your front door and in communities around the world (you know, the every day sort of things most people aren’t going to bother to mention on the nightly news because it doesn’t have a flashy headline) you just might see that most of us are just regular people trying to do our best and squeeze a little happiness out of this life while we’re here.

And what a blessing to have a chance to love and connect with others at the same time.

If you get a chance to see Come From Away, DO IT!! And in the meantime, be kind to each other every chance you get.

P.S. The amazing folks from the show (including several Nebraska & Iowa natives) donated a portion of the ticket sales totaling more than $30,000 to flood relief. And many of us in attendance donated even more to the collection buckets on our way out the door. What a great way to spend the day! 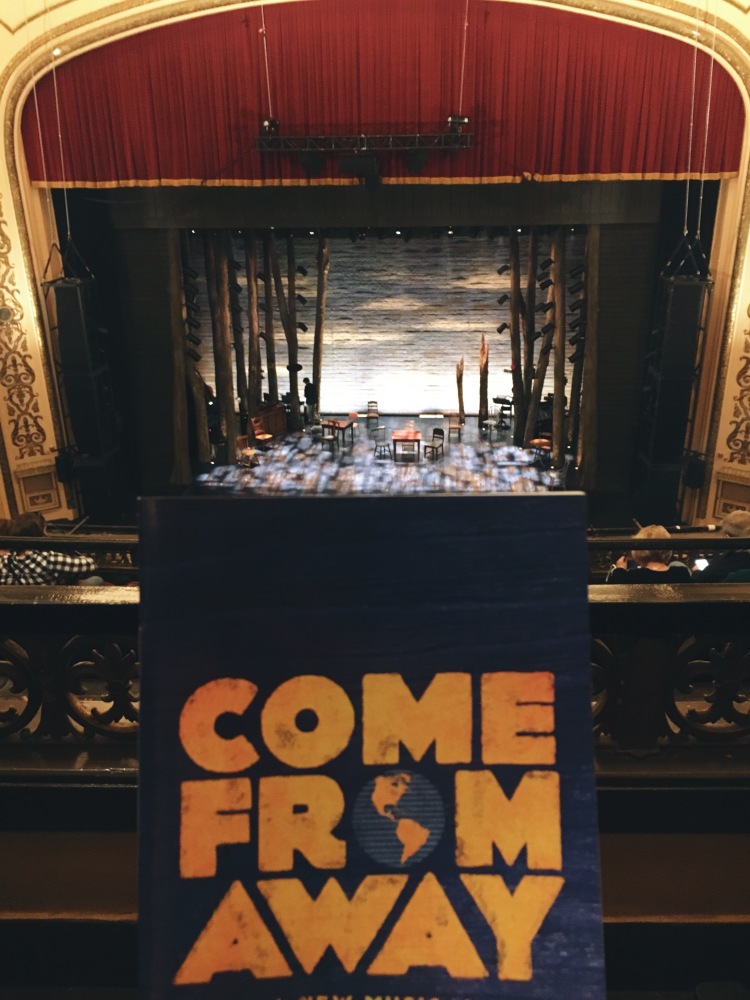