Since Cadence started school in August, I’ve been itching to get into the classroom and take some photos of her. The first couple weeks, drop-offs were rough. She was anxious and unsure, clinging to me and crying when I hugged her and said goodbye. Since her birth, we’d never been apart for more than an hour or two at a time, and even then, she was either with her Daddy or a grandparent or someone else she knew well enough to no be afraid. I knew it wouldn’t take her long to come around though, my inquisitive little girl. I knew that once she settle in, made friends, began to trust her teacher Mrs. Becky that she would love school and learning, and begin to shine.

It was around the time I realized that Cadence loved school so much and was so comfortable there that she didn’t even want to hold my hand walking in the door or hug and kiss me goodbye anymore that I figured I could probably get away with taking a few photos of her in the classroom without causing too much of a clingy ruckus. And hell, if she was embarrassed by me just walking in the room and saying goodbye to her, I might as well just go whole hog and go all paparazzi on her and her little friends and show her what real embarrassment is all about.

Poor girl, she’s got a whooooooooole lot of uncomfortable years ahead of her living with Steven and me.

So, last week when I picked Cadence up from school, I asked Mrs. Becky if it would be okay for me to come in one day and take some pictures of Cadence in the classroom. I mentioned that I’m a photographer, so if she ever wanted photos of a class activity or anything, to just let me know and I would be more than happy to help out. She said yes immediately, and mentioned that the class would be carving pumpkins, since they’d been learning about them all week. I was ecstatic! We missed out on the pumpkin-carving fun last year because Cadence wanted absolutely nothing to do with pumpkin-picking or pumpkins.

Apple-picking? Absolutely. She loved every minute of it, and talked about it for weeks afterward.

Pumpkin-picking and maybe a photo op in the pumpkin patch? She threw an all-out, fall-to-the-ground, kicking, screaming, whining, crocodile tear fit right there in the pumpkin patch. Thankfully we got it on video. We’re planning to show it to the first boy she brings home when she’s a teenager.

I made sure I told Cadence that I would be coming into her classroom to take pictures of her and Mrs. Becky and her friends. Even so, when we arrived and I unpacked the camera from my bag, I still got a “What the heck are you doing, Mom? Put that thing away! I’m at school!” look of annoyance. 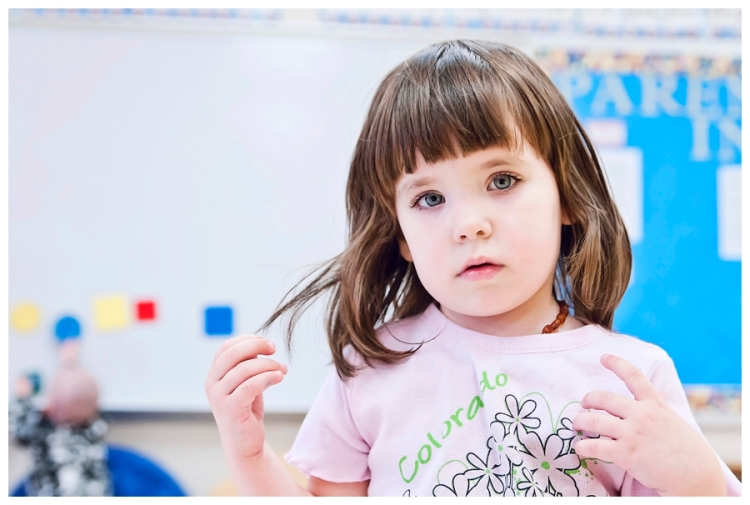 But as soon as her friends started gathering around her Momma and begging for their pictures to be taken, Cadence seemed to change her mind about how uncool it was to have a photographer for a Mom.

I stayed for a little over an hour, snapping photos of all the adorable little munchkins in Mrs. Becky’s class as they went about their daily routine. I watched my daughter, awestruck at the amazing little person she’s already become–playing with her friends, taking turns, listening to Mrs. Becky’s songs and instructions (and sometimes choosing to selectively hear them).

I even watched her creep in close and examine the honorary class pet (well, at least until next week’s spider unit is finished), and then turn on her soap opera-style acting skills and pretend to be scared.

The pumpkin-carving was a success. Cadence and her classmates had a blast scooping out the seeds and feeling all the “squishy stuff” inside, and I got a ton of great pictures. For my blog though, I’m only going to share pictures of my little one. 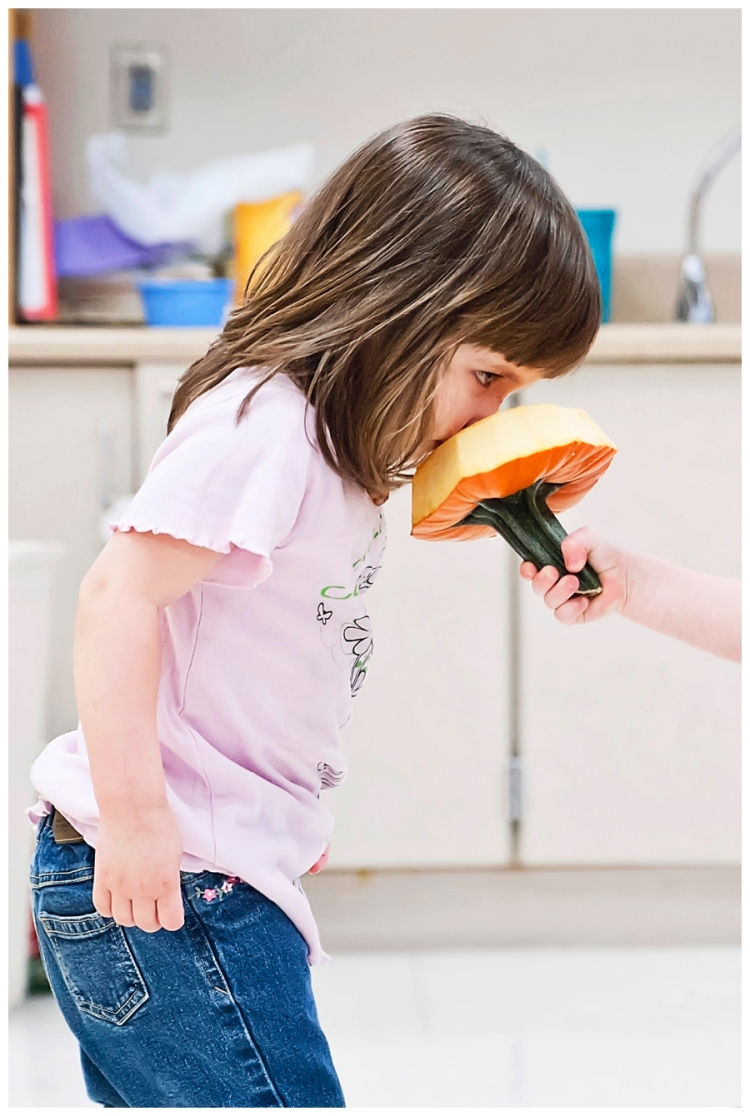 And then, after a quick clean up, it was time for the kiddos to get their wiggles out and do a little singing and dancing  before snack. Some of you probably know, Miss Cadence got her name partly because both Steven and I are drummers and music lovers, and partly because the minute we saw her bouncing around non-stop on the first sonogram, we knew immediately that this little girl likely had music in her bones. I can’t even really explain what music does to this child, but here are a few photos to illustrate. In the words of Gloria Estefan, “The rhythm is gonna get ya…” 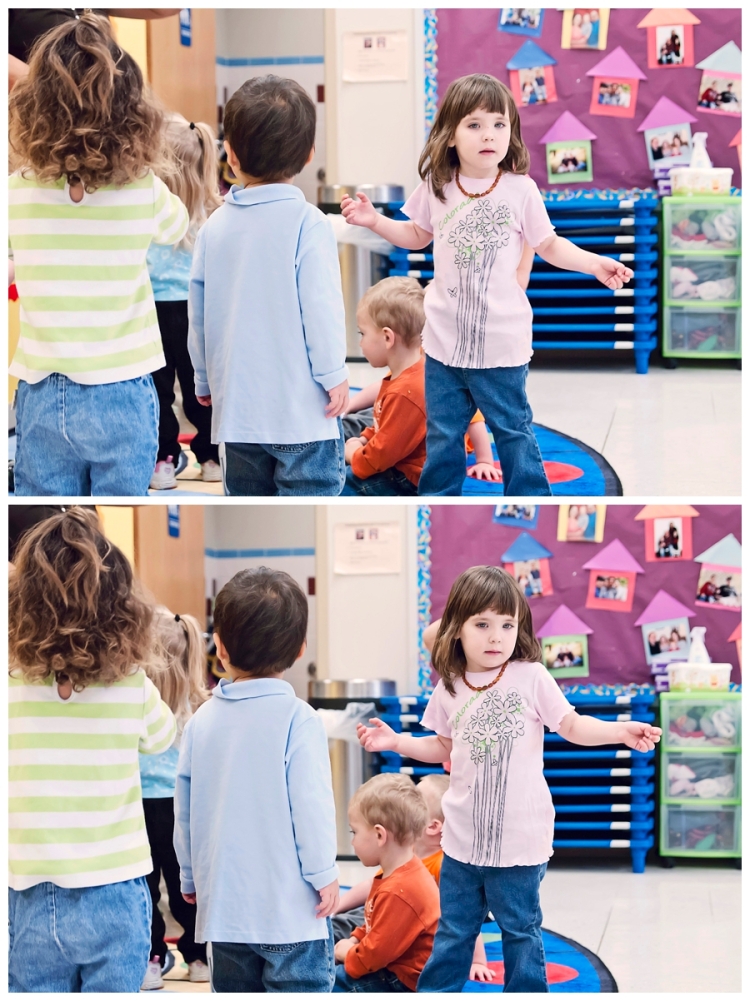 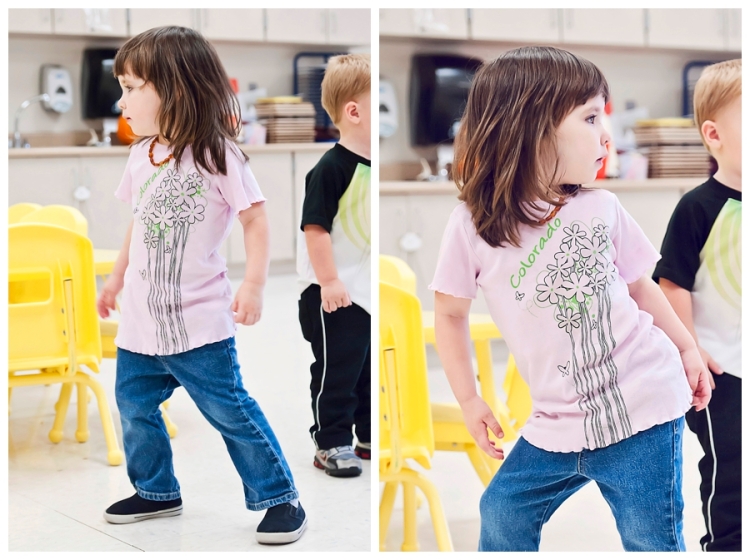 And then, it was time to line up, sanitize the little hands, and head off for snack.

I said goodbye to my feisty little girl and thanked Mrs. Becky again for letting me share an hour of her day. God bless the teachers that take such good care of our kids. I can tell you absolute certainty that our little Cadence is in very good hands.

So, you may have noticed that I took a serious hiatus from the Excavation Project. I couldn’t help it. Temperatures have been in the mid-sixties and climbing since February and the world here is abloom. Between trying to clear away last fall’s debris from our yard and just trying to soak up some of the beautiful sunshine, I haven’t had much time (or motivation) to descend to the basement and empty more boxes.

But they’re still sitting there.

Time to stop making excuses and get back to it. Well, maybe a post a week or something, and only when it’s crappy or raining. Otherwise, all bets are off and Cadence, Electra and I will be exploring the great outdoors.

So, to jump back into the Excavation today, I thought I’d get a huge weight (in books) off my shoulders.

But first, a little backstory…

I’m not one of those people who always wanted to be a teacher. Let’s face it, teaching is just in some people’s blood. And the best teachers are a complex mixture of counselor, humanitarian, and performer. For someone like me, who is a bit of an introvert and hates being the center of attention, a teaching career was never really something I imagined for myself. In fact, other than a writer and photographer, I only ever had a short stint wanting to be a marine biologist and dophin trainer, none of which involved an overabundance of social interaction.

If you want the truth, I sort of fell into teaching, not really by accident, but definitely by a strange set of circumstances. After graduating college with a degree in English and creative writing and spending two years working as a college Admission Counselor, I was ready for a change.

I actually seriously considered joining the NYPD and becoming a police officer. After passing the initial exams, all that stood between me and the academy was scheduling and passing the physical exam and completing the final pre-hire interview. Instead, I decided to join the NYC Teaching Fellows program and start teaching high school English in the Bronx while completing my Masters degree. In the end, I think I made the right decision.

That being said, I have a pretty volitile love/hate relationship with being a teacher. I love opening students’ eyes to new concepts and ideas, and seeing them get excited when they learn something new, but I hate the apathy and the laziness and the laundry list of excuses they come up with when they just don’t feel like completing an assignment. I love analyzing texts with a class full of eager student. I love hearing their ideas and helping them unleash the writer they never imagined was cooped up inside them.  I love watching my students smile with pride when they finally see a big A at the top of the paper that they spent hours and days and weeks writing and rewriting and editing and revising until they got it just right. But I hate dealing with adminstrative red tape and lazy parents and kids who have a seriously overdeveloped sense of entitlement that is in no way reflective of their work ethic.

And did I mention I hate being in the spotlight?

Being a teacher means being in the spotlight from the minute the first bell rings until long after the last student has gone home for the day. You’re up on the “stage” performing your educational routine for eight hours a day. Then, there’s the planning and the grading and the researching and the mentoring. After that, there’s professional development and the meetings and paperwork and catching up on correspondence with parents, so you can explain for the thousandth time that the reason young Tommy isn’t passing your class is because he spends his time etching his initials into the desktop and pressing his chewing gum into the pages of his texbook instead of reading or studying or actually completing any of his assignments. And that’s a good day when he actually shows up for class.

So, even though there are things I loved about being a teacher, and even though I can’t say for certain that I will never find myself back in the classroom again, it’s time to get rid of some of the books that have been collecting dust on my shelf for too long.

First, there are a few teaching guides, everything from Shakespeare to writing to creating your own classroom newspaper.

Then, there are several vocabulary and literacy books.

I have a stack of teacher resource books, and several books on classroom management. And I gotta admit, I never even opened most of the classroom management books, because there was nothing in those books that was going to teach me how to handle it when two boys started fighting and throwing desks at each other across the room or what to do when a kid who has gotten kicked out of half-a-dozen schools finds his way into your classroom and starts threatening to stab his fellow students and “snuff that bitch teacher”. Nope, at that point, it’s better to just let the adrenaline take over and trust your gut instincts to shield the rest of the students from the danger and call security.

I’ll leave the classroom managment books to someone else. 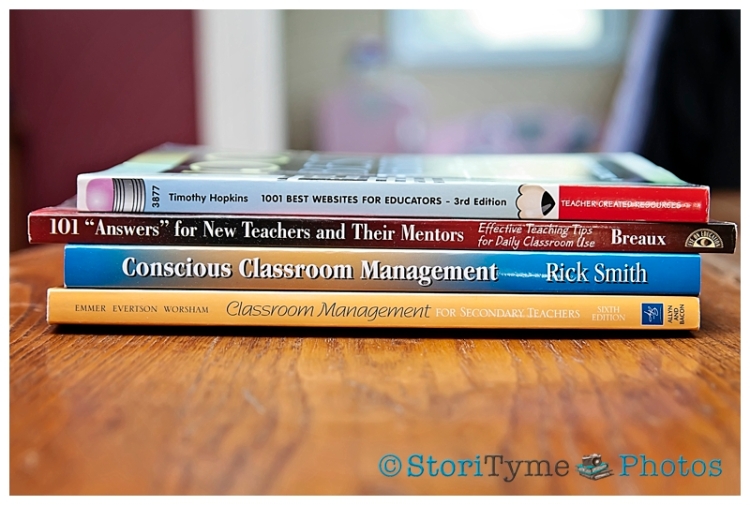 And last but not least, a few of the college “textbooks” from my English 101 and 102 classes. I gotta admit, I think I opened these books a total of twice in the 2 1/2 years I taught at CAC. They are, quite possibly, the worst college-level books I have ever seen. Luckily, the adminstration didn’t force professors to actually use the books. Intead they just provided a list of skills that students would be expected to master before passing the class, and allowed the professors to create a curriculum to get them there. Thank God. Otherwise, I may not have been able to handle it. I mean, since when does a college-level textbook have more pictures than words? Enough said. 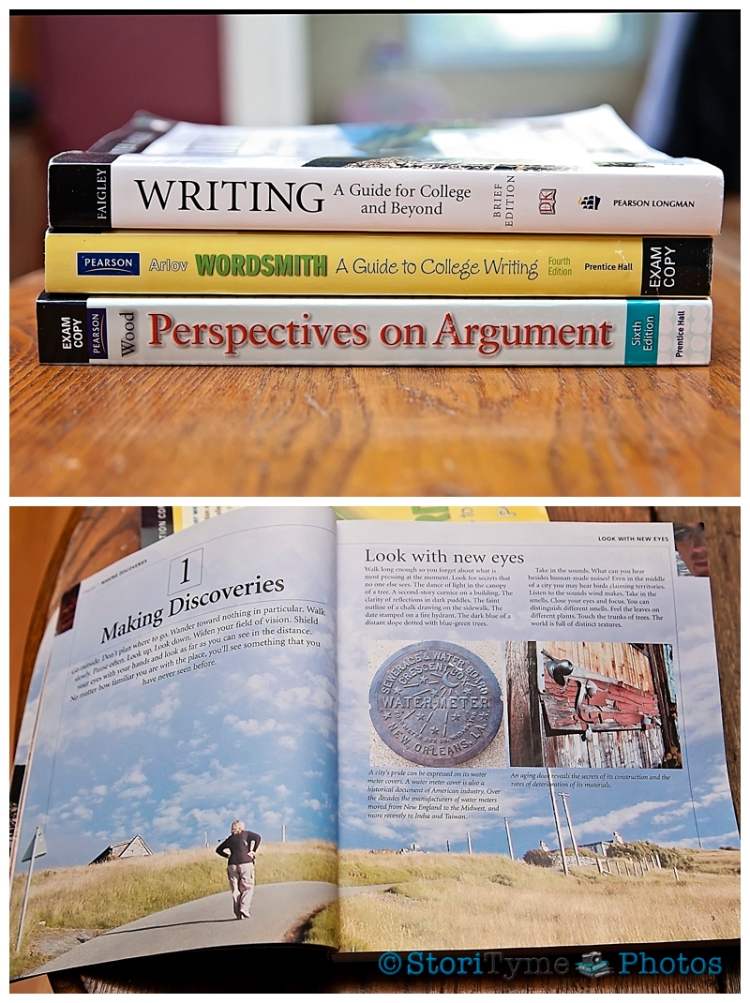