Some nights after I’ve finished feeding Henry and putting him to bed, I come downstairs into the living room and see this… 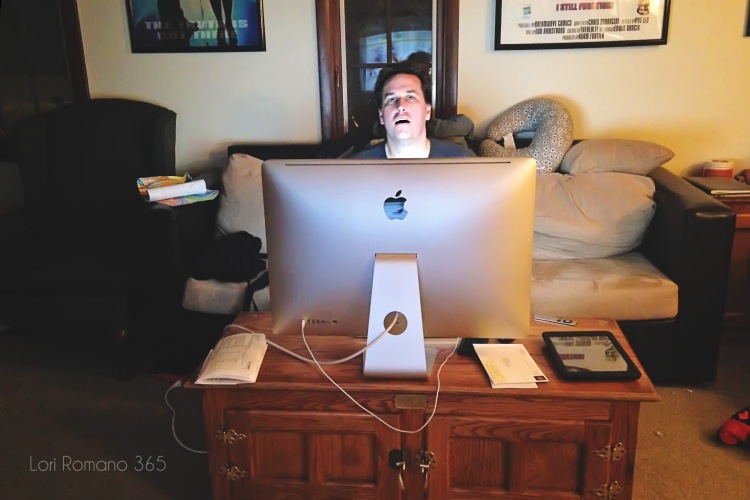 My hubby takes the definition of portable computer to a whole new level.

I think it started once when I was out of town for work. Stevie wanted to pay some bills and surf the web but the Islander game was on and he was torn, so he just carried the Mac downstairs into the living room and parked himself in front of the TV for the game after Cadence went to bed.

Tonight, Stevie is balancing the checkbook and researching what mixer would be best for us to finally start the podcast he’s been plotting for several years now, watching the Islander game and the ridiculously censored version of The Usual Suspects they’ve got playing on the Ovation channel.

And even though it cracks me up to see him sitting there, almost completely hidden behind the giant screen, watching a game or a movie or an episode of one of our favorite shows on the giant television, I’m not complaining. I’d much rather have him sitting down here in the living room with me than sequestered up in the office. My favorite way to end the day once the kiddos are tucked into their beds is hanging out with my hubby and sharing some laughs while we relax in the living room and stay up too late.

It’s the little things, you know?

The hardest part about taking a trip without my husband is not that I have to navigate the airport by myself with our 2-year-old in tow or that I’ve forgotten how to sleep in a bed by myself without someone stealing the covers or crowding me. Yeah, those things can be tough, but the worst part about not having Steven along while I’m out of town for a week is the simple fact that I miss him.

Go ahead and roll your eyes. Make retching sounds if you want. I don’t care.

Truth be told, life’s just a lot more fun with Steven around. He makes me laugh. He gets my jokes. He likes to discuss and debate things I like to discuss and debate. He sometimes even knows what I’m thinking without me having to say a word. Sitting next to him, I can’t help but feel that all is right with the world.

But even better than all of those things combined is seeing him be a Daddy. And boy, does his little girl miss him too. After fighting with my crappy old laptop for the last four days, we finally managed to get online and have a Skype date. Cadence freaked out when she heard her Daddy’s voice and saw him appear on the computer screen. It was all I could do to keep her from tearing a hole in my laptop to get to him.

If that doesn’t absolutely melt your heart, I’d have to question whether you’re even human. 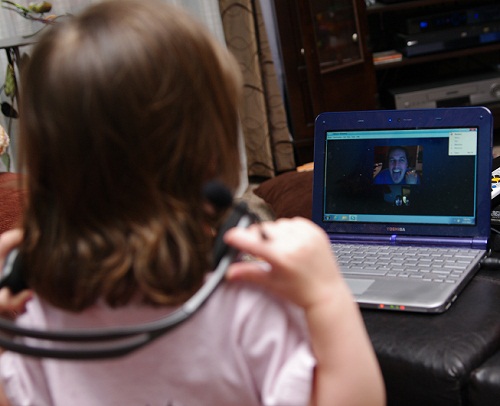