Anyone who met me after my late high school and college years would probably never guess that I once battled an eating disorder. Looking back now on that period of my life, I can recognize it for what it truly was.

It was never really about food. It never is, I suppose.

My friend, Betty, told me once that it was like I was choosing from a Chinese food menu, the way I seemed to pick new ways to hurt myself. It’s true–my appetite for destruction was once insatiable. I chose one option and then moved onto another as soon as it stopped satisfying me.

I slept until I was forced to wake up. I starved until I was forced to eat. I drank until my stomach protested and people began to notice. I got high until I ran out of drugs. I hung out with and dated guys until they actually started getting serious about me. I tortured myself until I couldn’t hide the scars.

I moved back and forth through the menu, either finding some new way to hurt myself or moving back to one I’d tried before. I slept. I drank. I burned. I cut. I got stoned. I starved. I lied. And I pushed away the people I loved the most.

And what did I do in between? I went to class. I had conversations. I went out. I spent time with friends. I talked to Betty and played with her children. I worked.

The eating disorder was just another symptom of my emotional trauma and self-loathing. At the worst of it, in the midst of the binge drinking and the marijuana-fueled mania and the anorexia, I was tipping the scales at just under 95 pounds.

Let me tell you something, folks, 95 pounds on this frame is anything but attractive. I could have had a walk-on roll in season three of The Walking Dead and played a very convincing decaying zombie.

It took a lot of therapy, a lot of love and support and time spent working on myself to repair and damage and rebuild my life. But I made it, and I’m better for it, and I can look back now and appreciate the view.

For the longest time, I was afraid that everything I put myself and my body through in my adolescence and early adulthood would haunt me later, and yet somehow I’ve emerged from it all relatively unscathed. I have battle scars for sure, but they are superficial, and I think I’m a much calmer, wiser, and more intuitive person because of my experiences. I can sit here today, happily married, the mother of a sweet and sassy 4-year-old, surrounded by friends and family, happy with my life and my career, knowing deep in my heart that all is as it should be.

Am I perfect, or perfectly comfortable in my skin? No, not really. And maybe I never will be. I’ve got about 30 pounds of extra weight I’ve been carrying around since Cadence was born that I’ve set a goal to finally get rid of. But that’s okay, because I’m at a place in my life where I can do it and be healthy and feel good about myself. And if I have to do it one ass-kicking dance workout at a time, so be it.

Yeah, I got this. 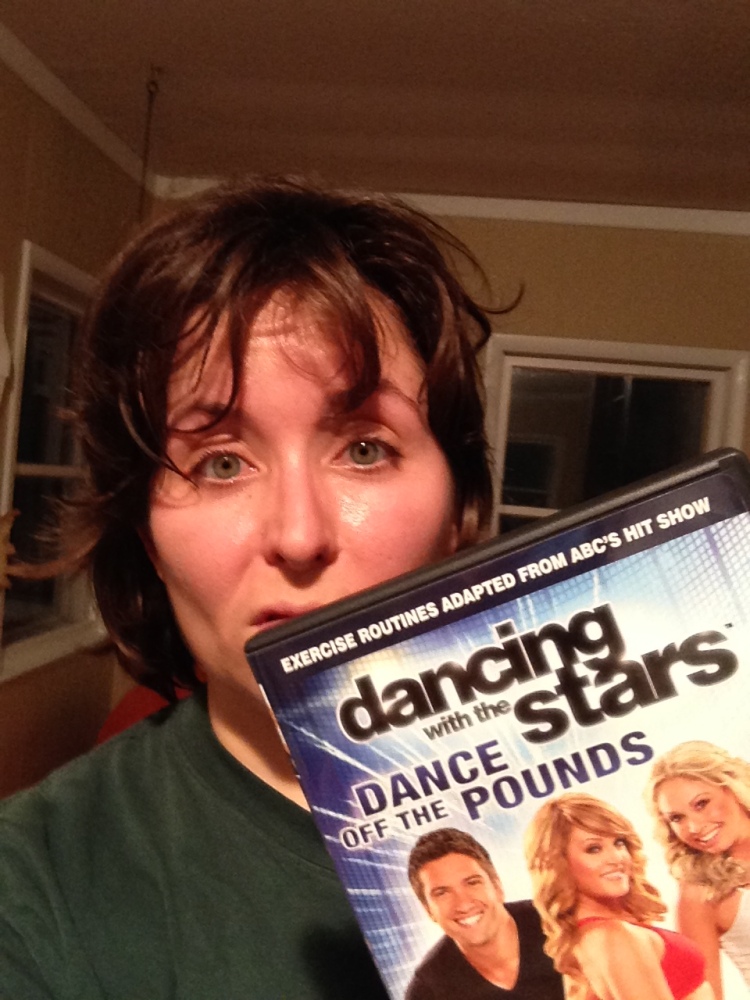 Steven and I were a little late to the Dancing with the Stars game. We started watching last year after seeing that the Season 12 cast included Ralph Macchio, Chris Jericho, Hines Ward and Kirstie Alley. I wouldn’t say we are crazy diehard fans, and we have yet to get so involved in the show that we actually cast votes each week for our favorites, but we do enjoy watching, and DWTS is set to record every week so we don’t miss it if we happen to be busy while it’s on.

As much as we enjoy the show, we have certainly endured our fair share of frustration at how some stars seem to manage to get a free pass week after week while others are kicked off prematurely. Think I’m crazy? Watch a few performances and then explain to me how Chaz Bono managed to last longer in the competition than Chynna Phillips, or how Rob Kardashian somehow earned a higher score tonight than both Rikki Lake and J.R. Martinez. I hate to think that the DWTS judges and producers could be “bought” with Kardashian money, but really, it wouldn’t be the most unethical thing that family has ever done. I’ll see how things play out in the final show tomorrow night before I give my final thoughts on the conspiracy.

Put all the feel-good moments and fantastic performances and conspiracy theories aside, my absolute favorite thing about the show is how my daughter gets absolutely giddy with excitement when it’s time to watch the “dancing show”. Through this season alone, Cadence has learned several new dance moves that she is happy to show off just about any time a song with a really good beat comes on. Whether you happen to be a fan of the show or not, I think you’ll appreciate this…

Yeah, there’s just something about a toddler’s dance moves that can brighten any day.

Tonight’s 365 Project entry is dedicated to dancing. It’s just one of those things that can make you feel good and forget your worries for awhile. I think maybe, we should all do a little more of it.