Anyone who knows our sweet Electra knows that she is, quite possibly, the laziest dog on the planet.

Unless it’s feeding time, you can probably find Electra snoozing on the couch, the chair, the floor, the bed, the porch, someone’s lap, or any place else that’s halfway comfortable.

Ever since moving into the new house though, Electra has spent far less time sleeping and far more time exploring our big new yard. And ever since the last snow melted and and the temperatures continued to rise, she has taken to tracking every critter that happens to find its way into our yard. She’s been tracking so much lately, that we’ve sorta begun to tune out her whining and yipping when she’s hot on the trail.

Today was no different.

Electra had been outside most of the morning and afternoon, alternating between sunning herself in the yard and sniffing her way through the bushes. I heard her start tracking shortly after I put Cadence down for her nap, but didn’t think much of it. Sometime later, it grew quiet again. Then, when I was talking on the phone to Momma Dawn, I looked outside and saw this… 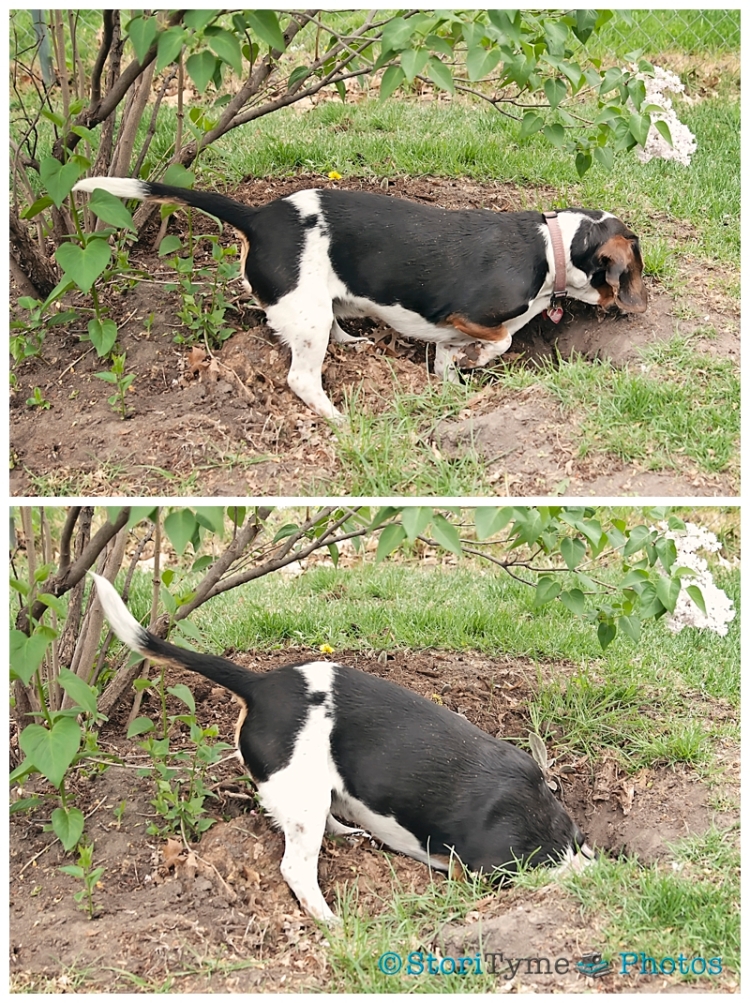 Electra has never been much of a digger. If she catches an interesting scent on the other side of the fence, she might halfheartedly paw at the ground for a minute or two, but she’s just never really motivated enough to to dig more than a divet. I knew something must have gotten into her today, because by the time I slipped on a pair of shoes and made it outside to investigate, she’d managed to dig several large and deep holes in the front lawn around the lilac bush. 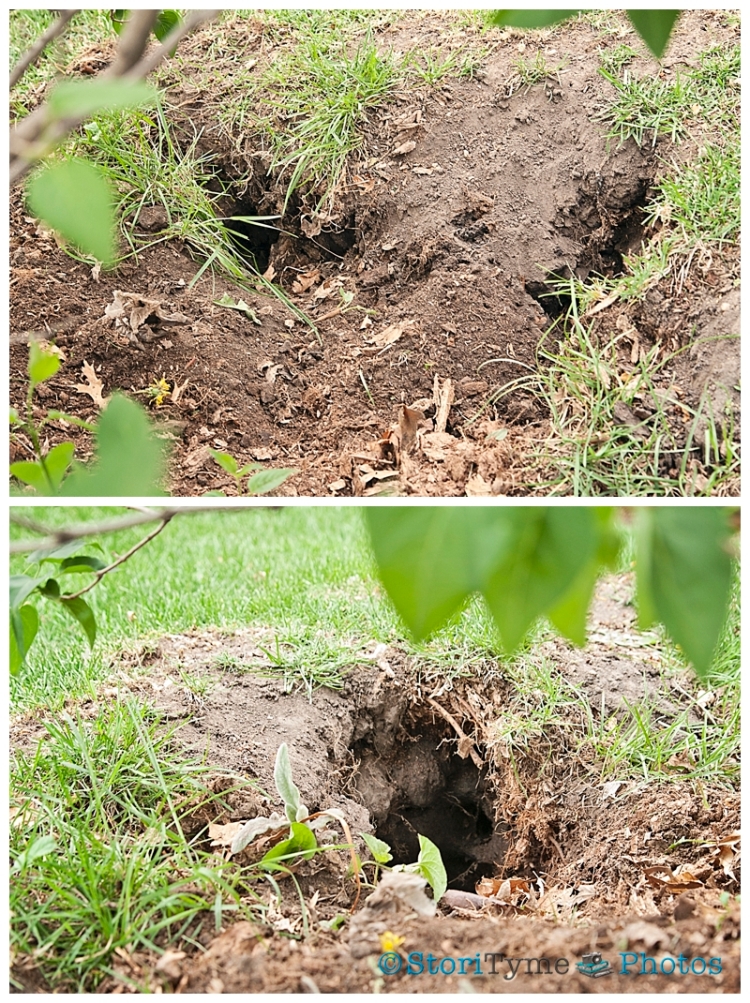 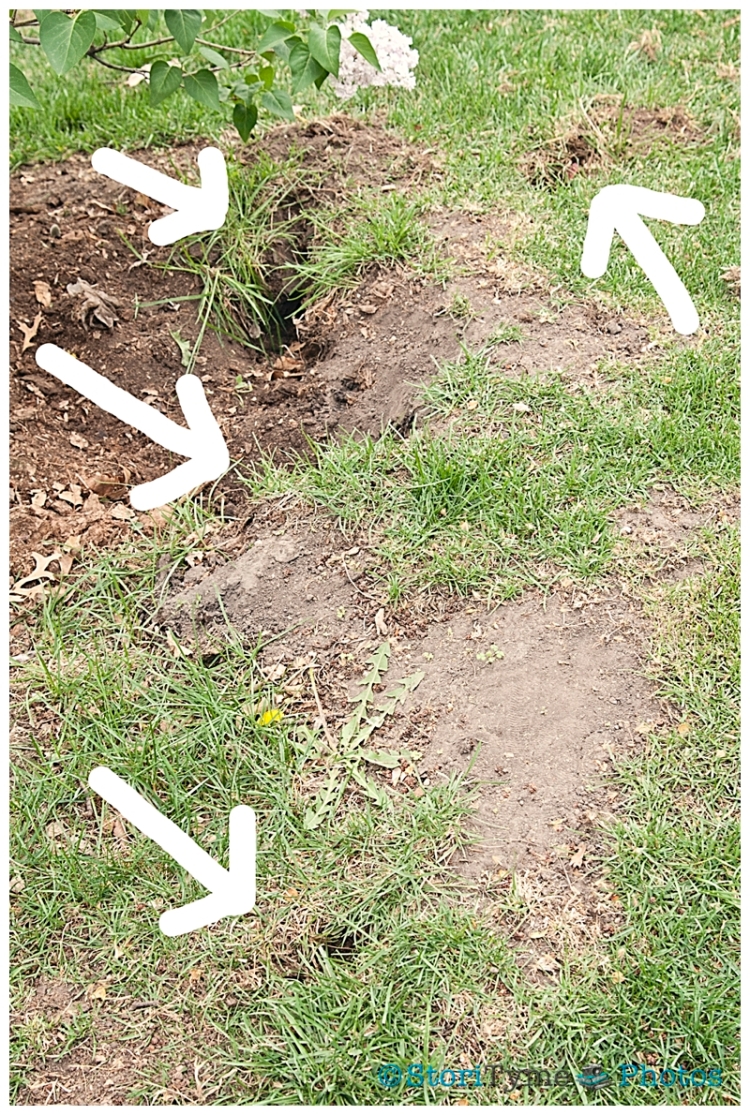 I peered into the holes, but couldn’t see anything, so I went over and sat on the porch while I continued to talk to Momma Dawn. Several minutes passed before I finally realized what Electra was up to.

I watched as she stuck her head down deep in one of the holes, and then jerked it back out again, flinging a garter snake out into the yard. She moved in close to get a good sniff, and the snake lunged at her face.

Then the battle was on… 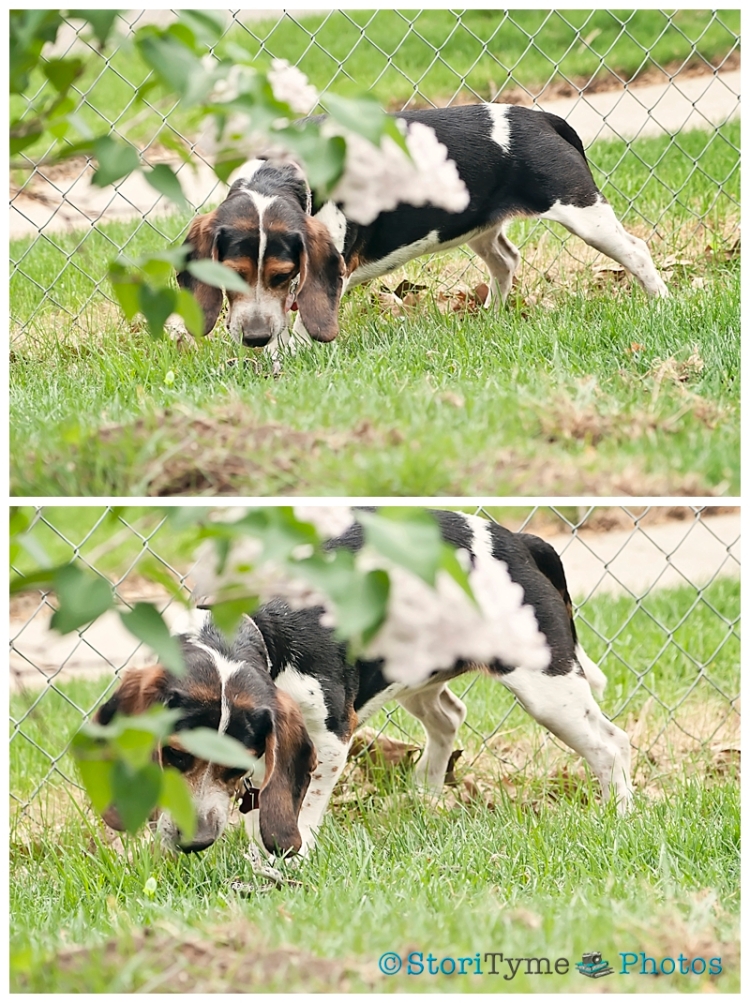 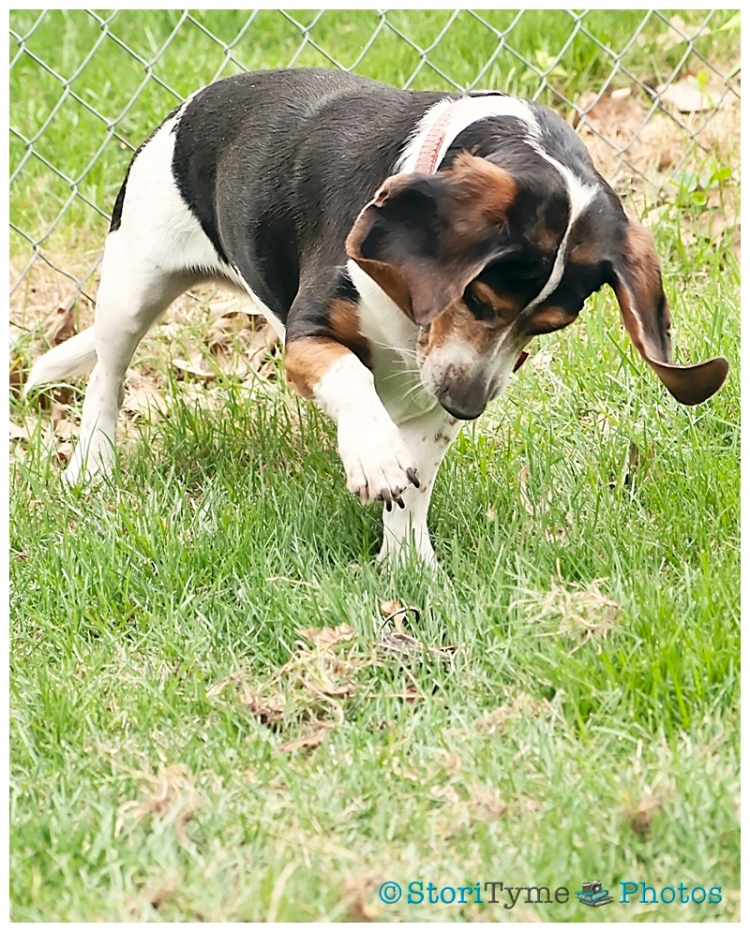 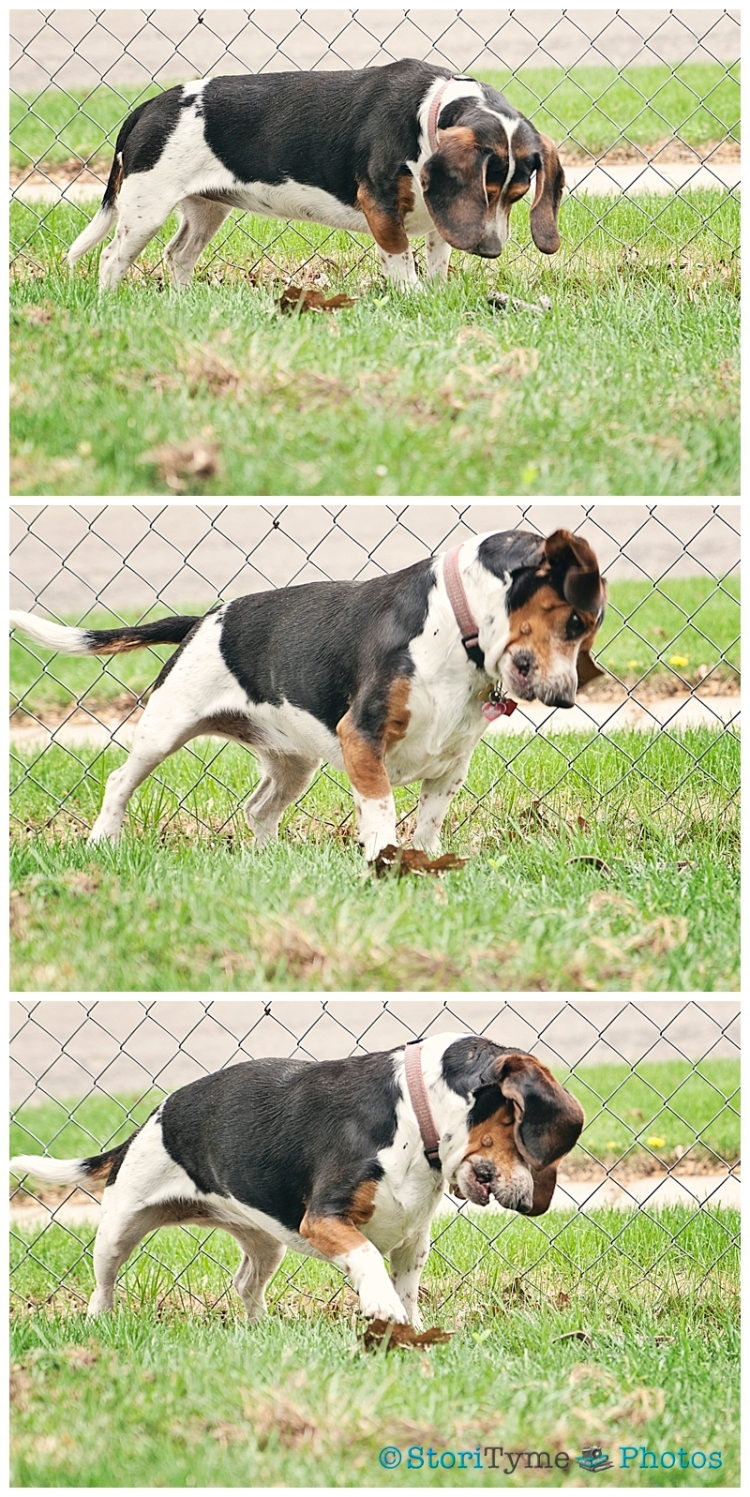 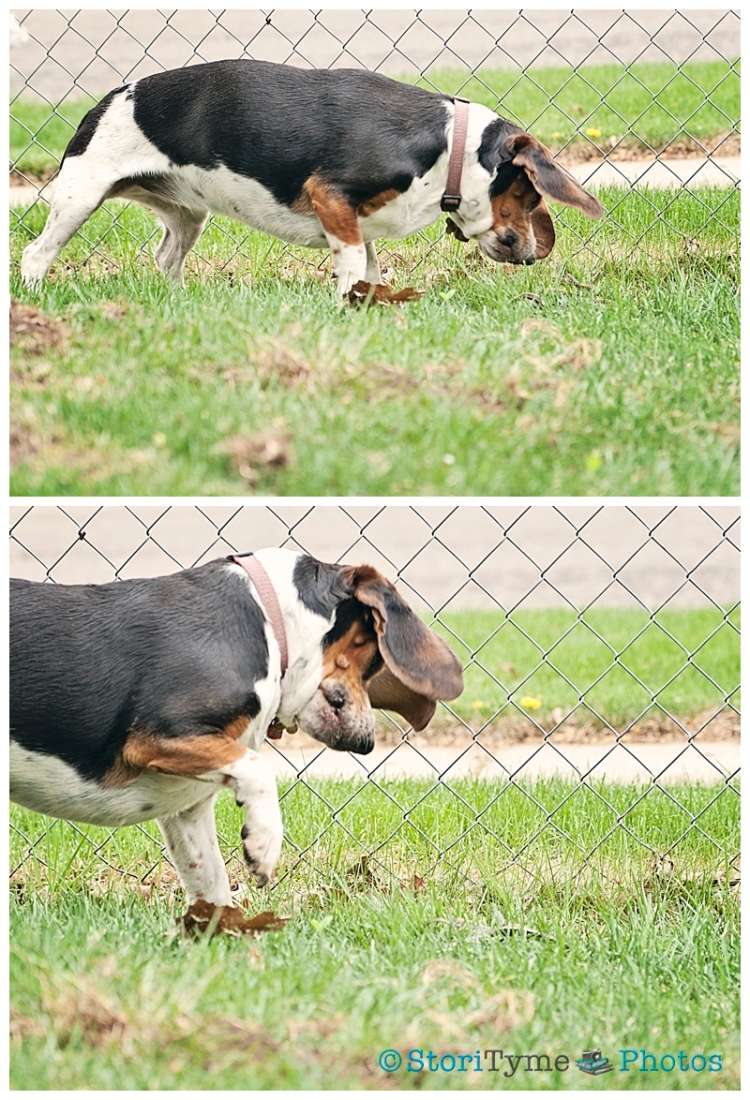 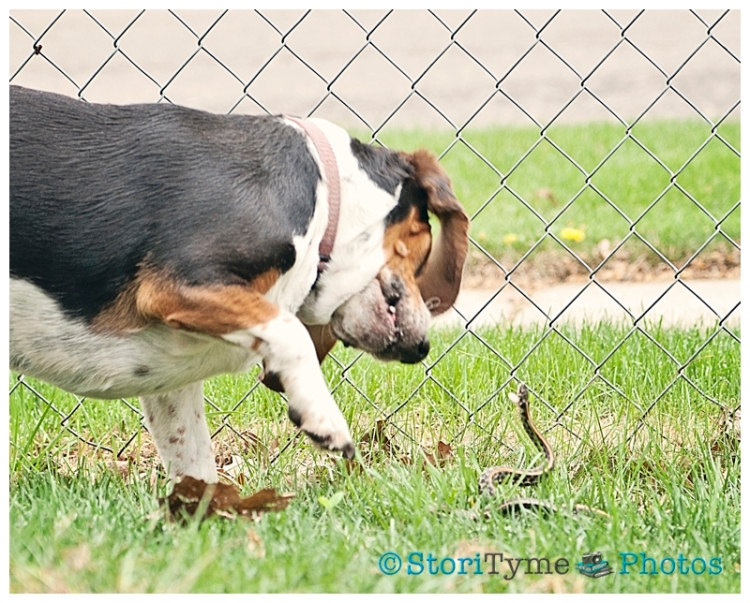 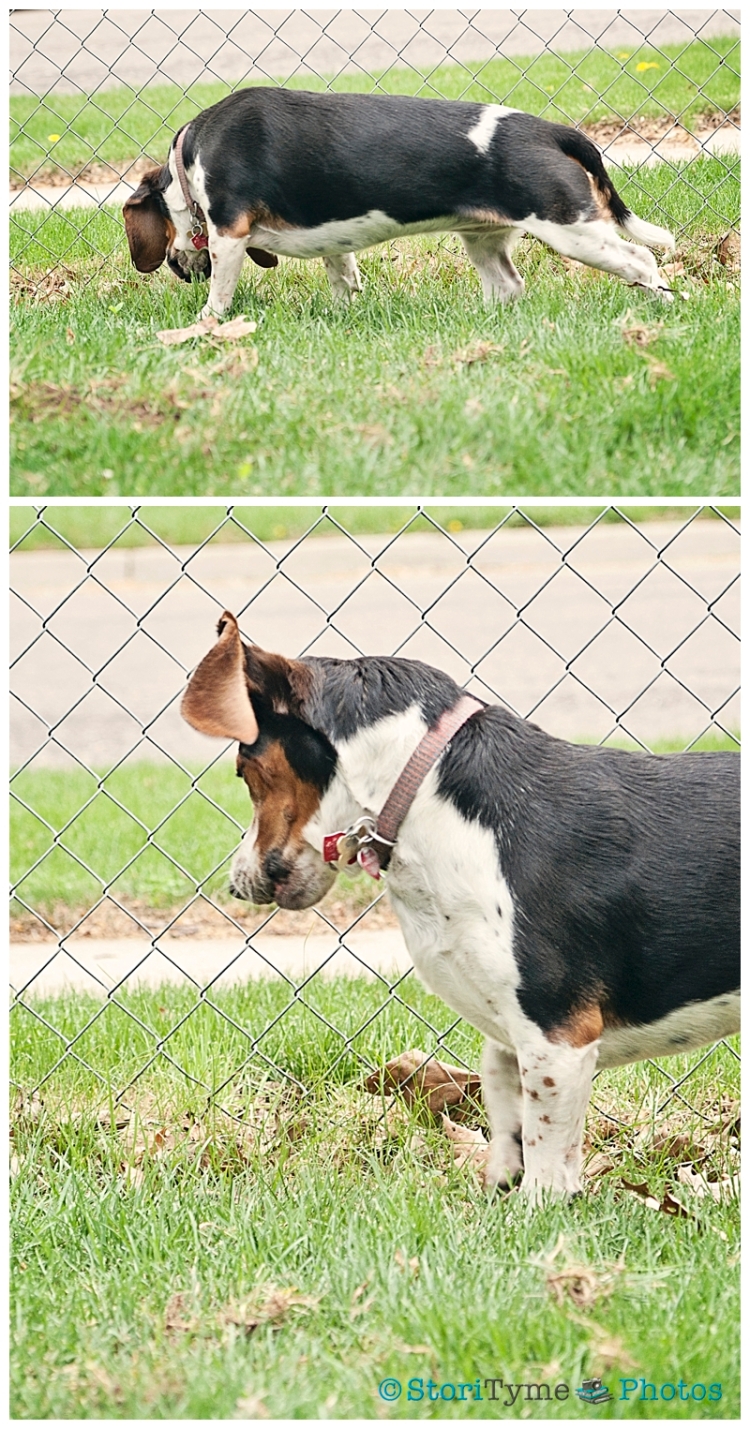 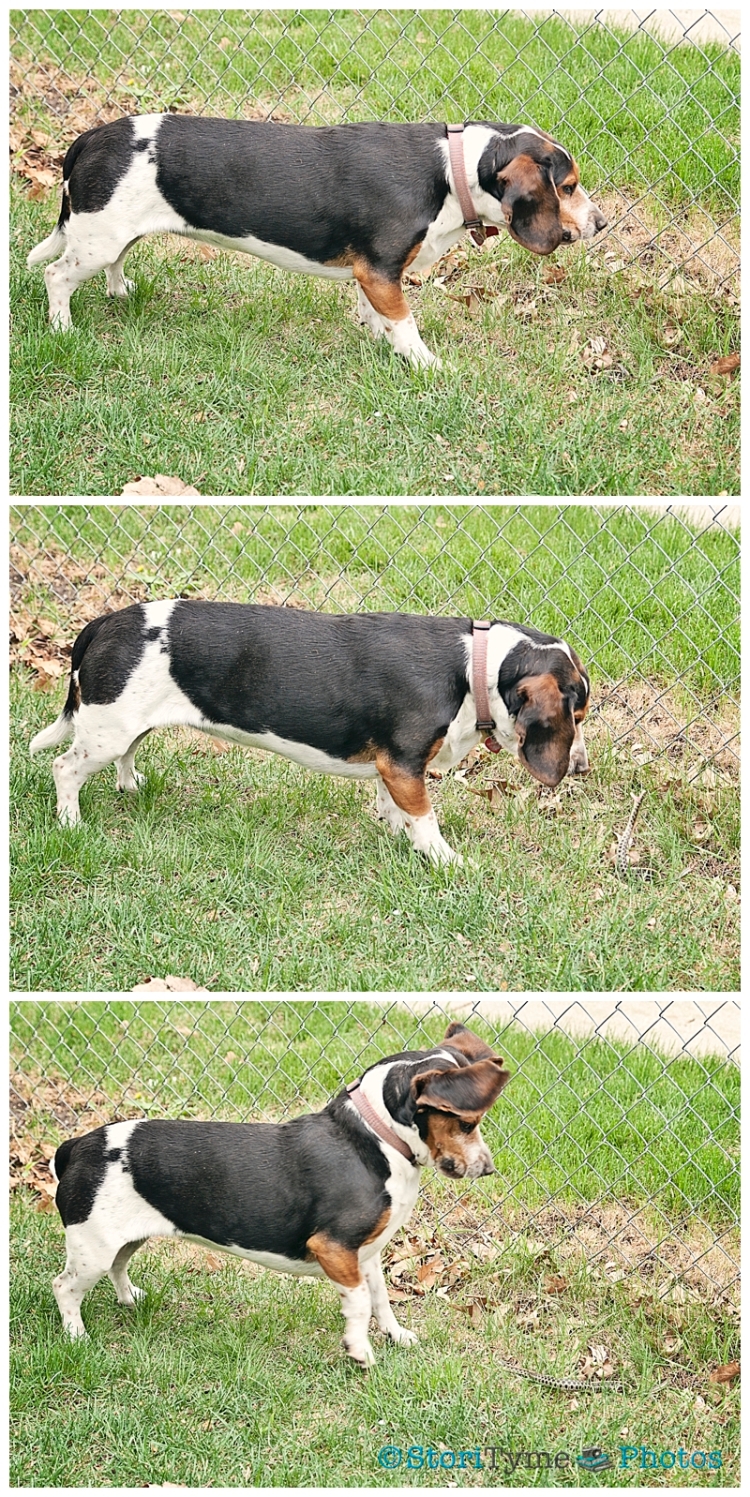 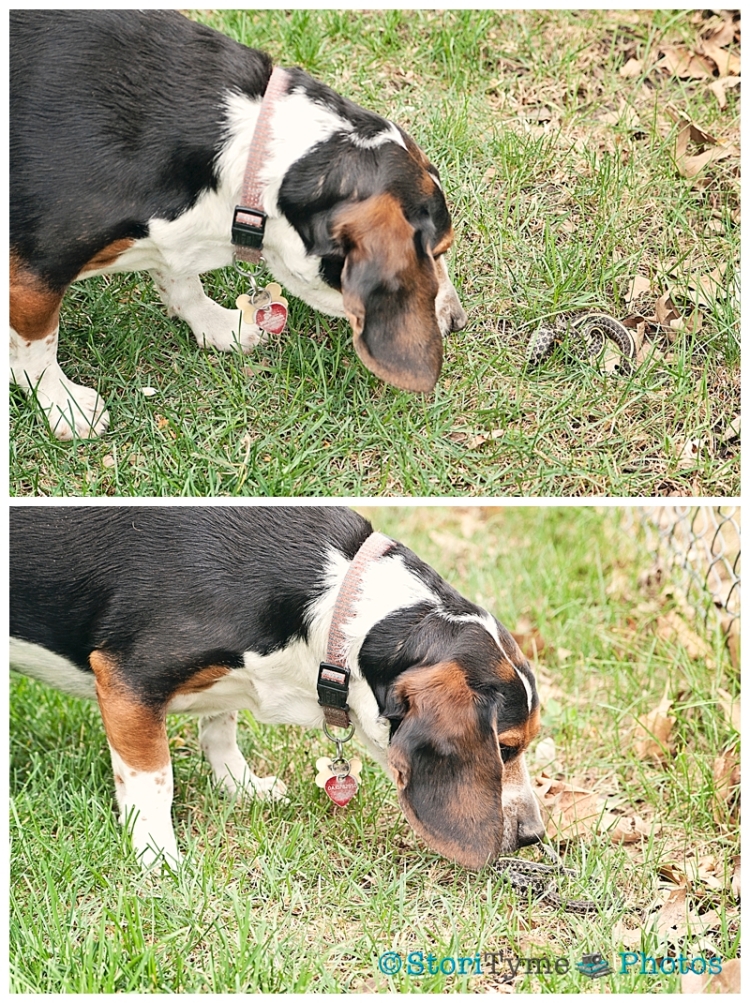 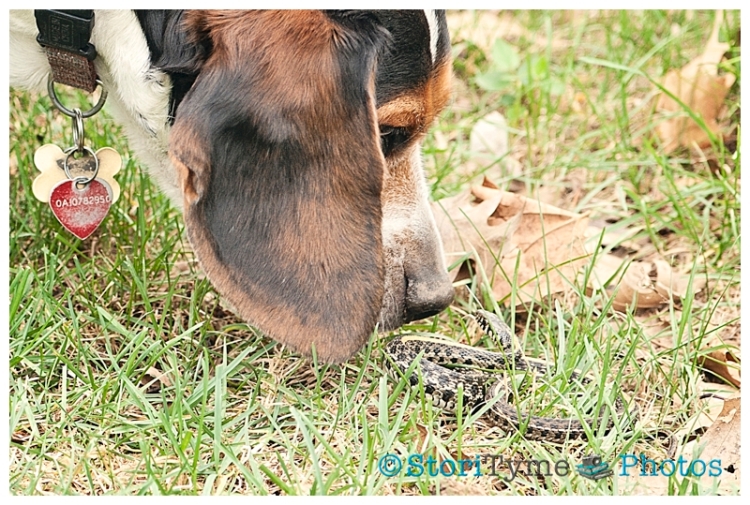 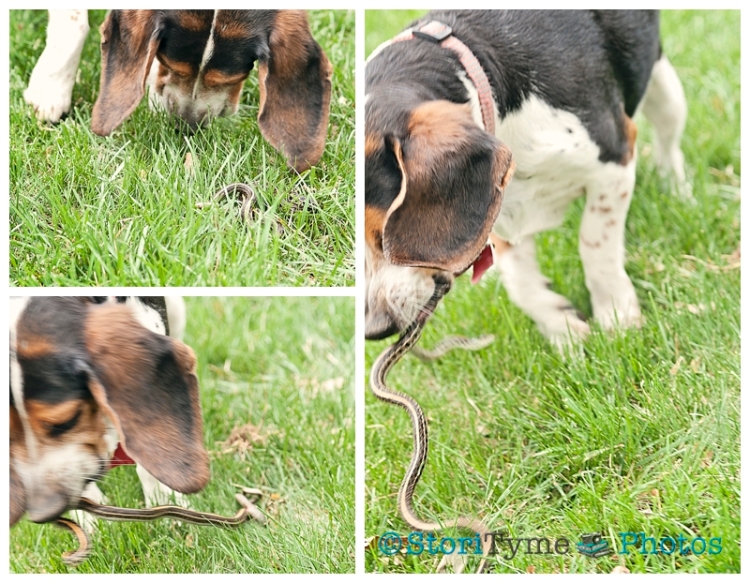 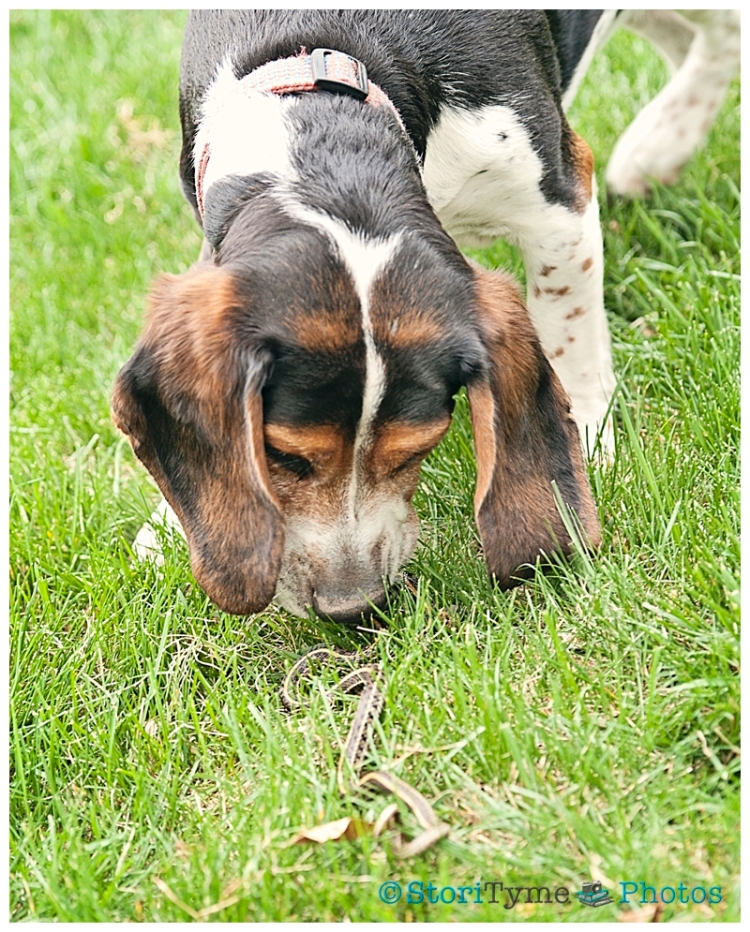 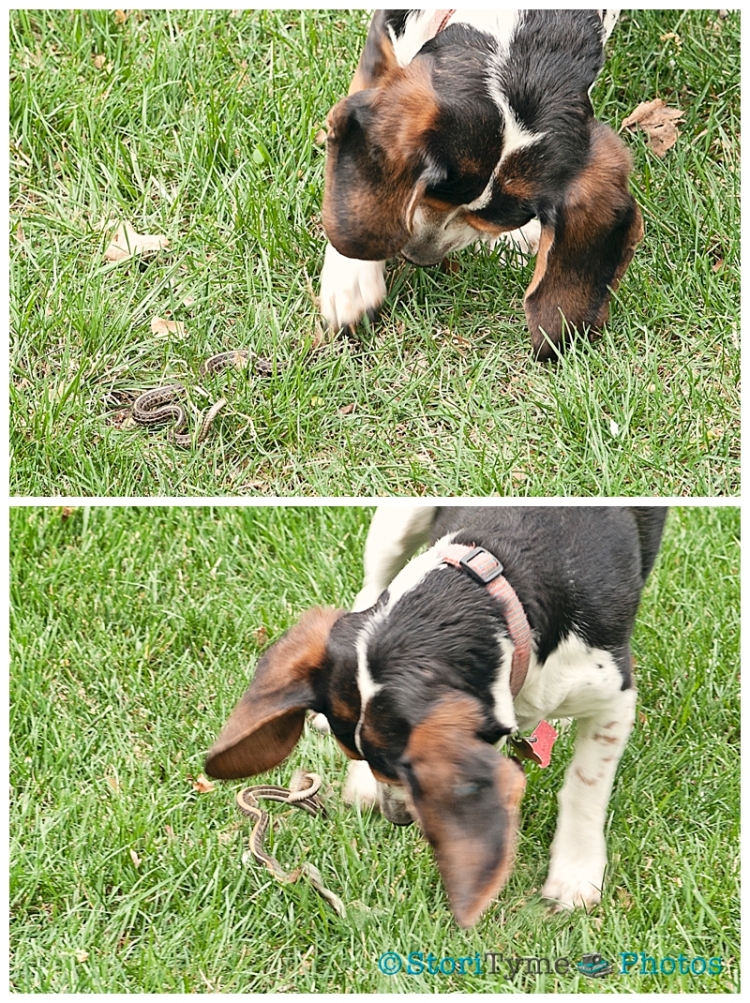 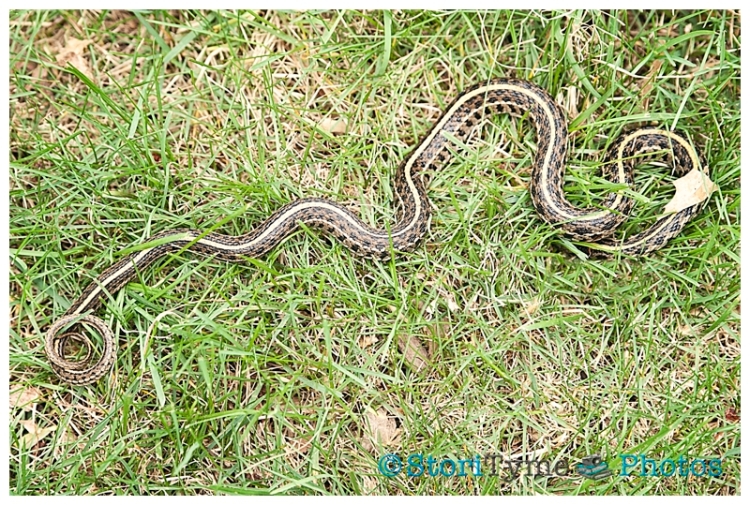 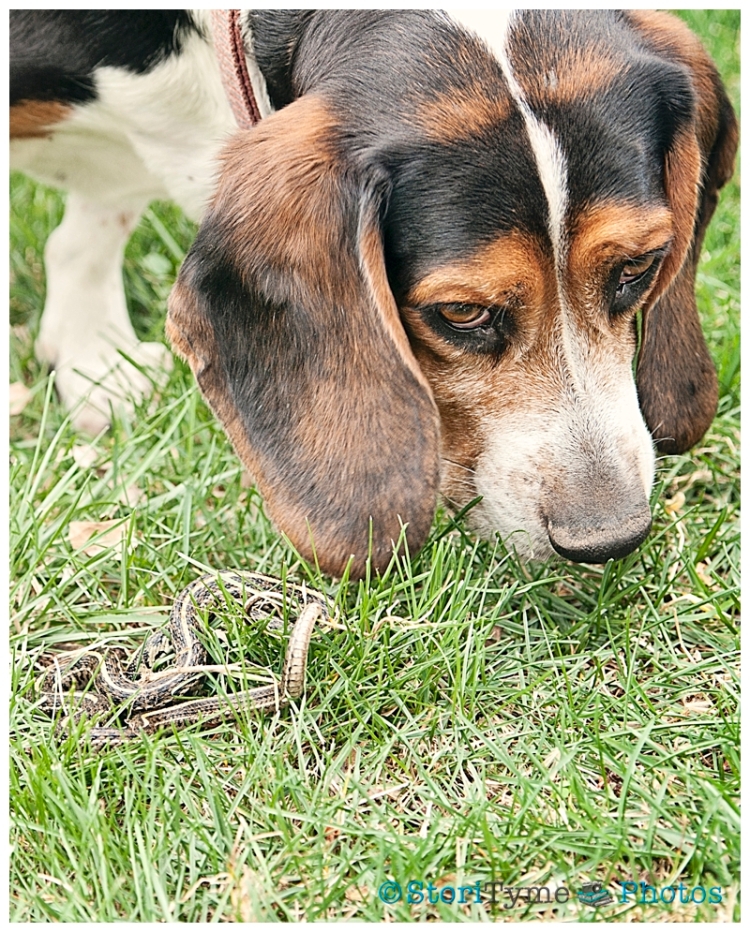 Finally, when it appeared Mr. Snake had been defeated, Electra moseyed off to continue her afternoon rounds. But later when Steven got home and went out to survey the damage, the snake was nowhere to be found. Guess he must have been playing dead. I hope he finds himself a better hiding place, because now we know that Electra can find him even four feet underground.

Electra may not be the fastest dog around, or the most obedient, or the most coordinated. But if there’s one thing she has, it’s an abundance of ambition. She has lofty dreams, this sweet hound of ours. She dreams of a world with an endless supply of kibble and cookies, a world where the squirrels are slow and the rabbits slower, a world where it’s not rude or frowned upon to stick her nose right in the middle of everyone’s business for one good sniff.

And, in the perfect world, there would certainly be no fences between her and whatever scent happens to catch her attention.

Some new neighbors recently moved into the house on the other side of the fence. After doing some initial remodeling indoors, they have moved onto the yard and cleared away several trees, piling a big pile of fallen leaves and branches and debris near the fence.

Something in the pile caught Electra’s attention today.

As much as I love my dog, I have to be honest…for all her ambition, she has about as much chance of actually digging out of the yard as I have of one day winning an Olympic gold medal for the 100-yard dash. It took Electra a half-hour just to clear away enough soil to actually stick her snout beneath the fence. After that, she was prefectly content to just give a few big (and very loud) sniffs, and she was satisfied. 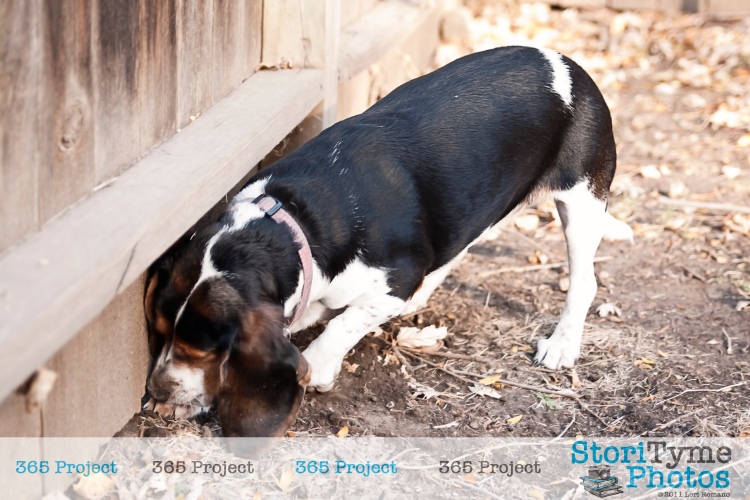 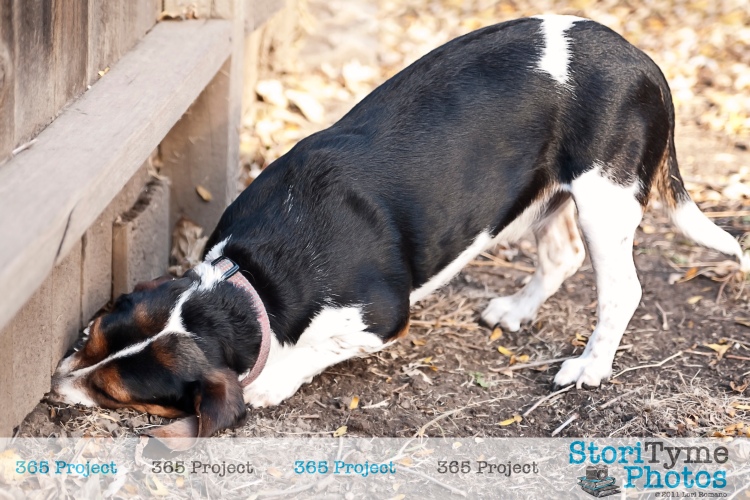 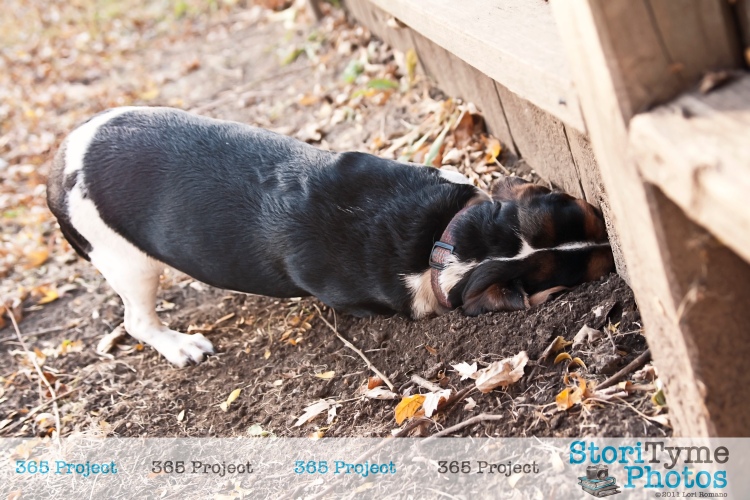 And with that, she was onto her next adventure.

Tonight’s 365 Project entry is dedicated to my dear sweet dog and her big dog dreams. Who knows what tomorrow will bring?

Okay, I know I have already posted several pictures of my daughter digging or playing in the dirt in other blog posts, but I just can’t help myself. Every time I see her plop her butt down in a pile of dirt to play, I can’t help but imagine myself as a child, doing the exact same thing.

See, I had quite an obsession with digging when I was a kid too. I fancied myself a Goonie, and just knew there there was some hidden treasure out there just waiting for me to uncover it. After exploring every nook and cranny of the houses my family lived in and not finding anything that resembled an old treasure map or one of One-Eyed Willie’s Spanish doubloons, my adventure seeking often led me to the next logical place where the rich stuff could be hiding–under ground.

Armed with a shovel and a hoe from Dad’s garage, I would begin my excavation. Once I even conned one of my friends into joining my cause, and by the time Mom got home from work, the backyard of our rental house was beginning to resemble the outskirts of Camp Green Lake from the movie Holes. 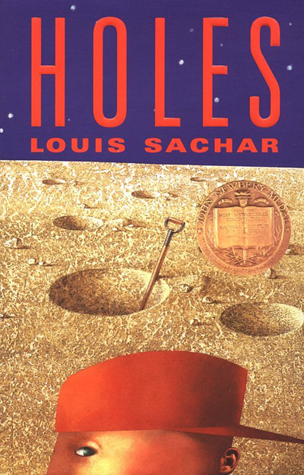 Yeah, that one got me grounded. And it definitely wasn’t as fun filling those holes back in again.

Alas, I never did find the rich stuff, but I can’t say I didn’t give it a good try. In the end, the thrill of the hunt was probably a whole lot more fun anyway, because I got to create, and I got to imagine, and I got to dream. And never once in all that time did I complain that I was bored. If doing a few extra loads of dirty laundry means that my daughter is being an active participant in life and exercising her imagination, then I would say the trade off is worth it, because there are few things that drive me crazier than people complaining that they are bored.

Bored? Really? Who are you? And what do you do to have so many extra hours in your day that you can actually be bored? And if you truly are, please feel free to drop by my house, because I have about 167 things for you to do that could rid you of that boredom real quick.

If you’re still bored after crossing every item off the list, then it’s time to head out there and start searching for some buried treasure because, if you ask me, boredom is just a side effect of a broken imagination, and what can be worse than that?

Tonight’s 365 Project entry is dedicated to living a boredom-free life, with an active body and an active mind. Otherwise, isn’t life is just a colassal waste of time? So, get out there friends, and start digging. 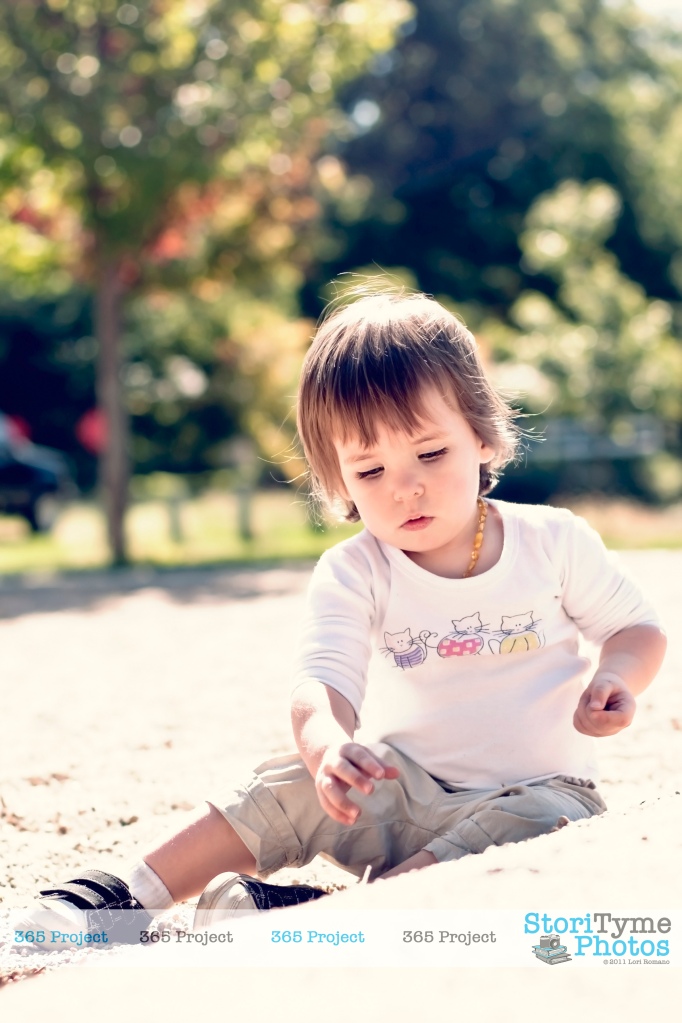 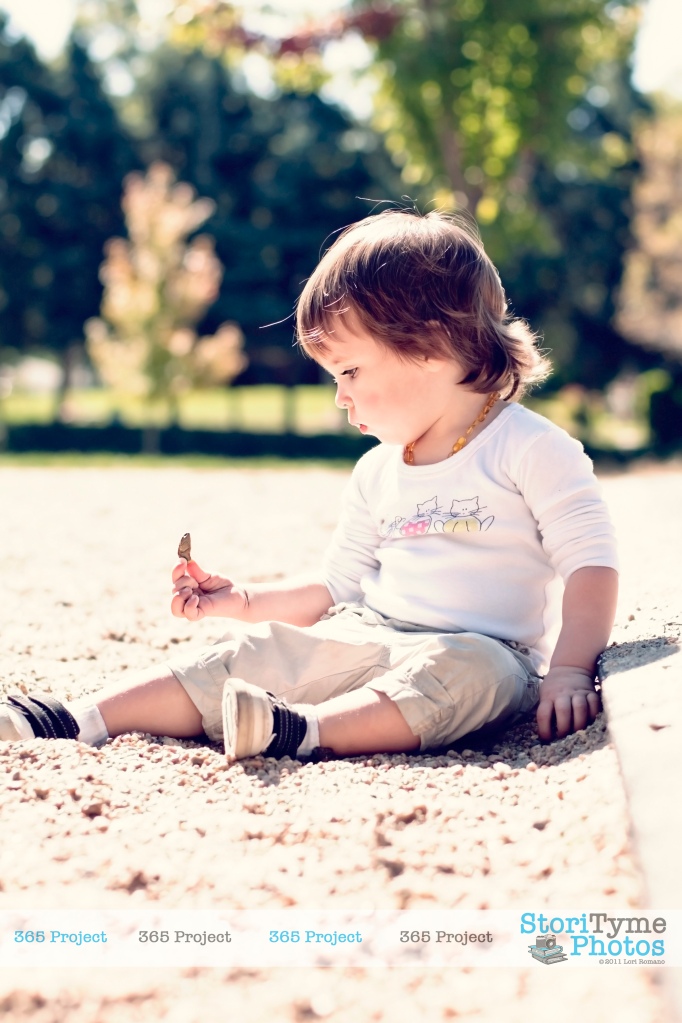 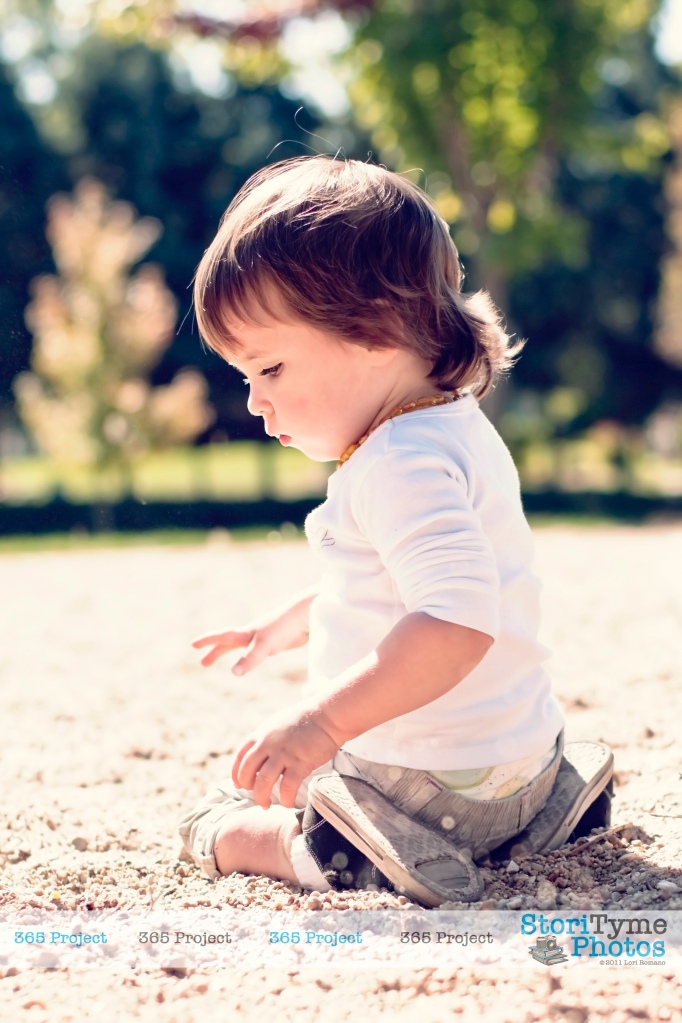 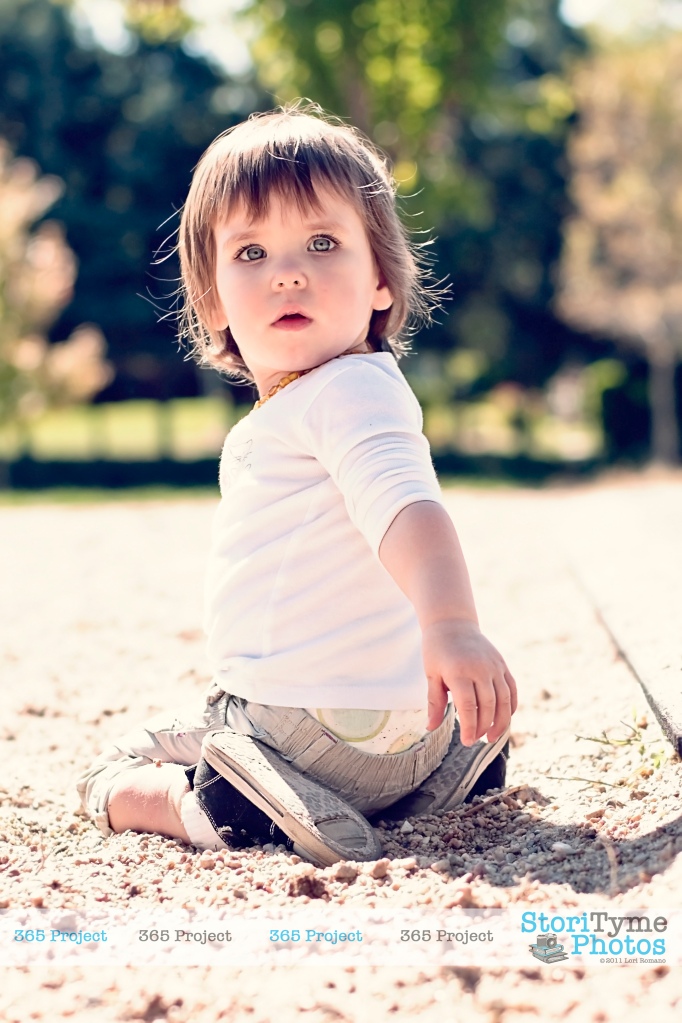