In spite of the daily stressors of things like going to work and paying bills and sharing the roadways with morons who apparently honed their driving skills over a cutthroat game of MarioKart, being an adult is actually pretty awesome. Sure there are parts of it that kinda suck–like watching the government take half of your paycheck in taxes and no longer having long summer vacations where you can be lazy and stay up until 4:00 a.m. watching episodes of Mystery Science Theater and eating an entire pan of brownies that your amazing adolescent metabolism will somehow burn off before your body can even consider turning said brownies into fat cells.

But, all in all, I have to say, being an adult kind of rocks.

First of all, I have way more street cred. I liked to joke around a lot as a kid, and I mostly spoke in sarcasm. The drawback to my wit was that a lot of people tended to laugh me off even when I was trying to be serious. Granted, I generally like to play most of my emotions very close to the chest and never really gave most people a chance to see what I was hiding behind my cool exterior, but it still often seemed that I never really had anyone that I could talk to about the really complex stuff. These days, I’m the one that just about everyone comes to with the complex stuff, and I seem to do a pretty good job helping them figure it out. I’m not sure exactly when that happened, but I’m so much more comfortable on this side of the confusion.

I’m also lucky enough to be in a really awesome relationship. Stevie and I are going on nine years of wedded bliss, plus two years of engagement, two years of dating, and five years of friendship. We’ve been together (or at least around each other) for more than half my life already, and I wouldn’t want it any other way. I’m getting to the point now where there is a stark division in my memories. There was life B.S. (Before Stevie) and A.S. (After Stevie), and yeah, a good portion of my life without him in it sort of seems like B.S. now (haha, see what I did there?).

Our relationship isn’t perfect by any means. We have our moments where we bicker and hurt each other’s feelings, but in the grand scheme of our relationship, those moments are very fleeting. He’s my best friend–the first person I run to when I need support, the first person I want to share a funny story with, the first person who gets my jokes, and the first person who will call me on my bullshit. I honestly can’t imagine what my life would be like without him, and fingers crossed I won’t ever have to find out. We both agree that no matter what happens, we’re sure as hell never getting divorced. Neither of us wants to ever dive back into that dating pool. The waters are murky and full of way too much weirdness. Plus, I doubt either one of us could find another partner who could put up with our quirks or our warped senses of humor.

We were made for each other, and we’re both on this crazy ride together right until the very end.

But the best thing about being an adult, that’s gotta be the fact that you get to make your own rules. Sure there are still plenty that you have to follow. You’re not allowed to walk into BestBuy, fill a grocery cart with assorted electronics, and stroll right back out of the store without paying. And you’re certainly not allowed to drink a six-pack of beer and a 2-liter bottle of homemade jungle juice, strip down naked, and march through your neighborhood singing I’m Sexy and I Know It at the top of your lungs.

But, for the most part, if you’re living in these great United States of America and you’re paying your taxes and obeying the laws and not hurting anybody, then you pretty much have the freedom to do what you please in the comfort of your own home. If you want to spend your entire weekend in your pajamas binge-watching The Walking Dead and eating Chinese take-out, no one is going to try and stop you. And if you want to forgo dinner altogether and stuff your face full of a pint of Ben & Jerry’s, then go for it. You’ve earned it, haven’t you? Your house, your rules. Simple as that.

Cadence is a pretty smart cookie, and she’s starting to understand that her daddy and I are enjoying this adult thing way too much. After her shopping trip at Toys R Us this weekend, I made the executive decision that we needed to stop at the store on the way home and pick up some ice cream (don’t ask why, it just sounded good). Stevie and I let Cadence pick out a flavor, and then we each grabbed a pint. Since they were on sale, I grabbed one more just to even things out.

“Why are we buying four ice creams?” Cadence asked as we headed toward the checkout line.

“One for you. One for Mommy. One for Daddy. One for Henry.” Stevie explained.

Stevie didn’t miss a beat as he chimed in with his usual speech, one Cadence has probably heard at least 400 times in her short life:

“I’m the King. Mommy’s the Queen. You and Henry are the little court jesters running around. When you move out, and you’re the Queen of your own castle, you can do anything you want.”

“Ugh! Daaaaaddy!” Cadence sighed, and I saw several shoppers around us start to laugh. And we laughed.

Then we headed home and ate dinner and we busted out some ice cream afterward, and all was right with the world. 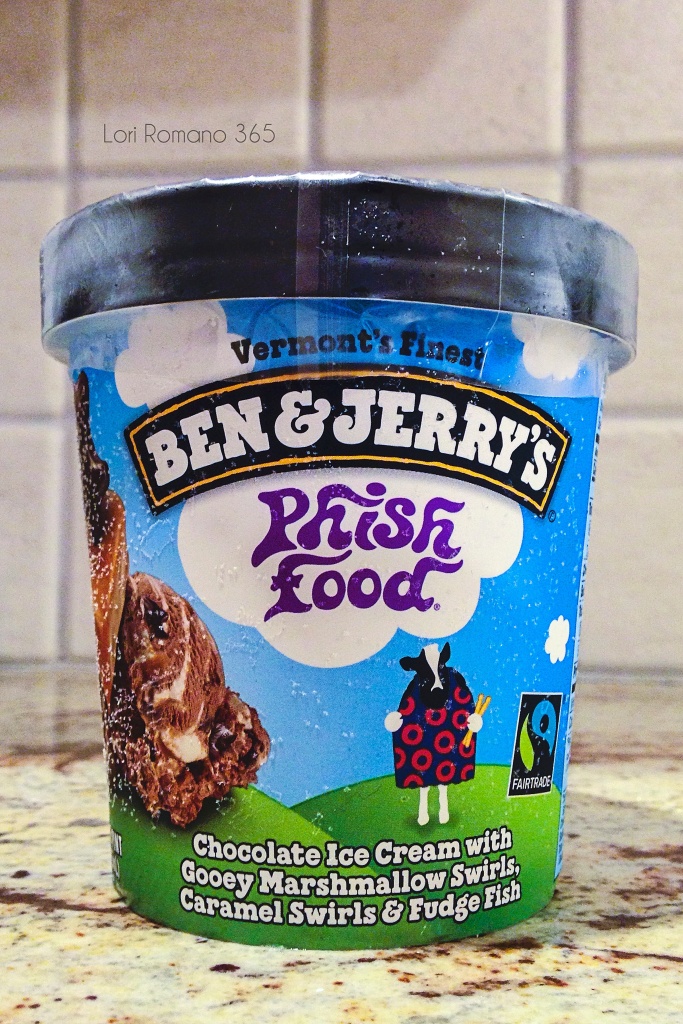 Since 1917, the UNL Dairy Store has been selling dairy products to the general public. The combination of exceptionally fresh ingredients and extremely low prices have made it a favorite destination for anyone craving some delicious homemade ice cream, cheeses, and even meat products.

It is, hands down, the best ice cream I have ever eaten.

What I find so cool about the UNL Dairy Store (aside from the ice cream of course) is the fact that everything is handcrafted and sold by UNL students. The Food Science, Agriculture and Animal Science students make everything in the store–from the ice cream and cheeses to the summer sausage, salami and jars of local honey. Students even work in the store, selling the items they made and learning how to run a business from the inside out.

Open 7 days a week, the UNL Dairy Store has a lot more to offer than just great tasting dairy products and low prices. They offer tours of the facilities if you’re interested in seeing exactly how everything works. They have a catering department that can cover everything from ice cream socials to full meal service. They have daily Lunch Specials, and a daily Happy Hour from 2:30 – 3:30 p.m. They have a variety of Gift Boxes filled with your favorite meats and cheeses that can be purchased and shipped just about anywhere. And, last but not least, they have daily ice cream specials,  hand packed containers ranging from 10 oz. single serve to 3 gallon cartons, and an extensive list of always available flavors, rotated flavors, and special seasonal flavors so you can enjoy something new every time you visit.

I just might go so far to say that the UNL Dairy Store is a little piece of heaven here on Earth because, really, what would heaven be without ice cream?

The best part for us is that we live just a few blocks away from the East Campus location. So tonight, we took a little family stroll through the neighborhood to get some ice cream after dinner. As you can see, Cadence didn’t enjoy the cup of chocolate ice cream we shared at all! 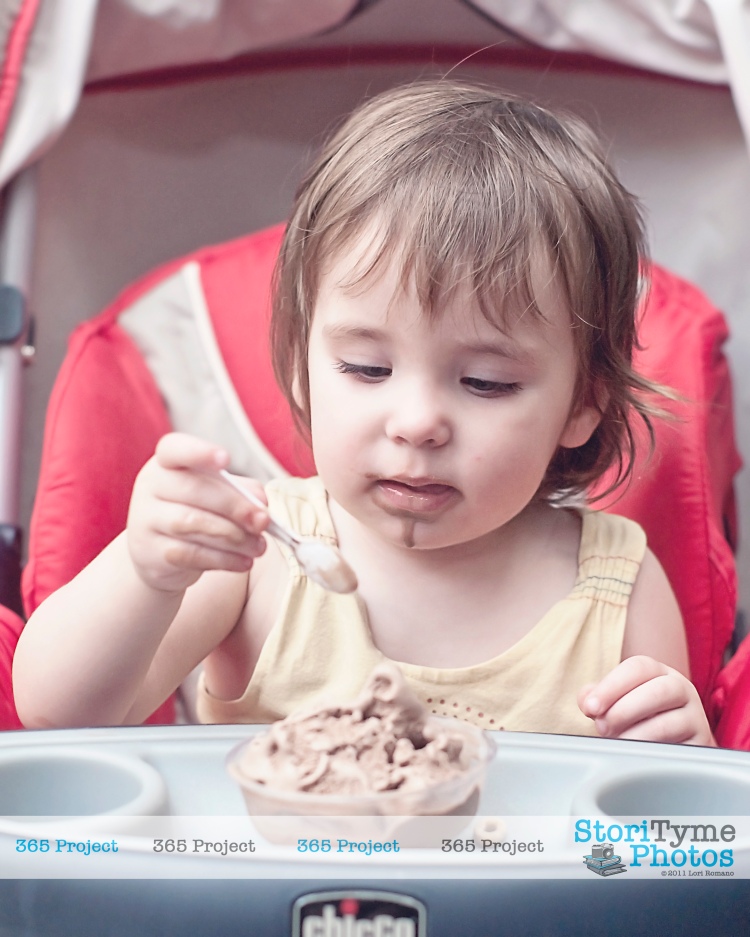 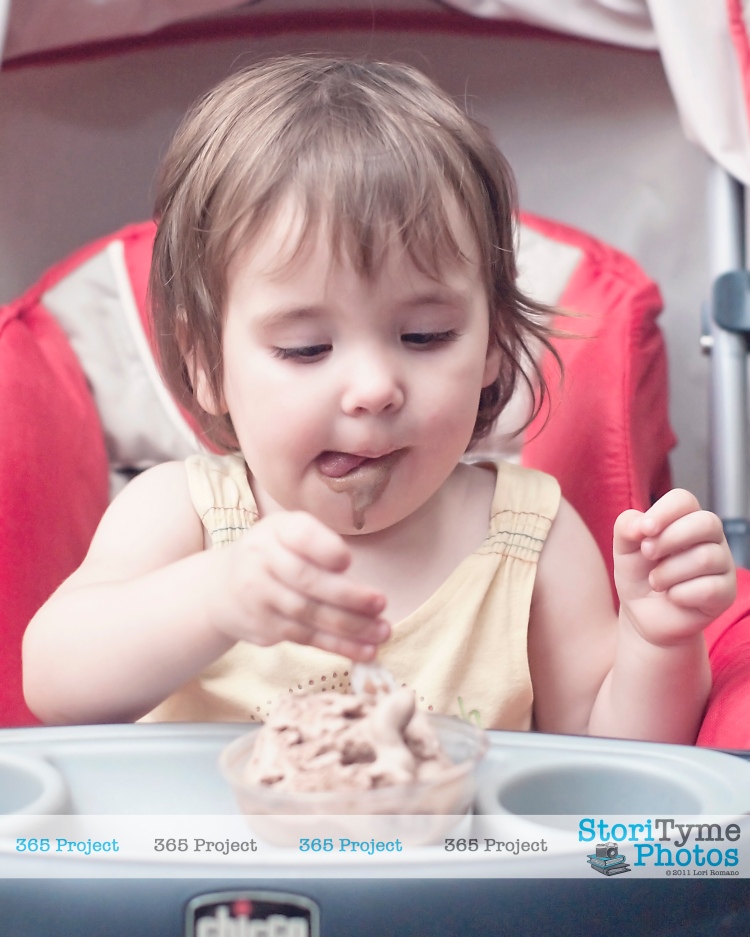 Heck, even Electra got a little taste from a gentleman that thought our droopy-faced hound looked like she could use the last bite of his mint ice cream cone. Of course, she spent the next five minutes licking a five-foot perimeter of the ground around her, just to make sure she didn’t miss a crumb.

Tonight’s 365 Project entry is dedicated to the fine folks who are in the habit of making such delicious ice cream. If you are ever in Lincoln, the UNL Dairy Store should be at the top of your list of places to visit.