You know we hear all the time about how the world is more connected now than ever, how social media and internet access and smart phones give us instant access to things happening all over the world, allowing us the experience news as it breaks. But that’s only half true, isn’t it? Because we’re really only as connected as our newsfeeds and our limited worldview allow us to be. The reality is that we can believe we’re informed and think we’re so “woke” but the only way we can ever really know for sure is to disconnect from our usual channels and push outside our comfort zones and look past the noise and the bullshit being fed to us.

Forgive me if I’m a little irritable right now, but I’m sitting here in a state that is literally drowning. Two-thirds of Nebraska is under water tonight. Entire towns, farms, ranches. Animals are freezing, starving, drowning. Tens of thousands of people have been evacuated from their homes, lost everything. Bridges and roads have been washed away. I’m seeing photos of the devastation in my newsfeed, posted by friends and family. Yet somehow this is all a blip on the national radar, barely a story any of the major news stations are really covering. 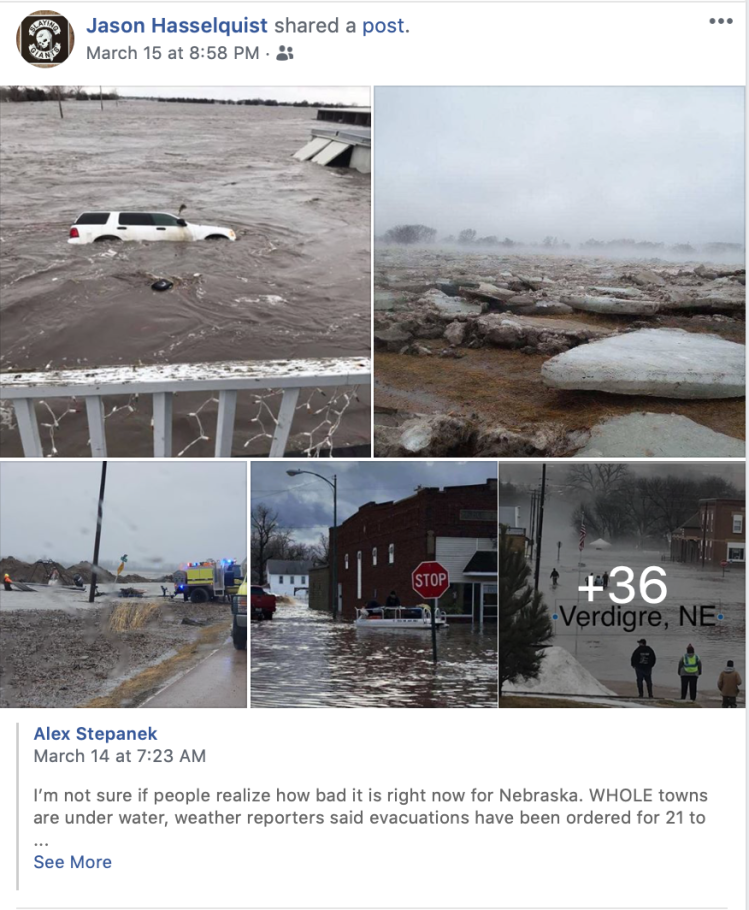 Hell, Nebraska got way more coverage when our new state slogan was unveiled a few months ago…”Nebraska. Honestly, it’s not for everyone.” Yeah, that hit the late night circuit. Live with Kelly and Ryan sure had a great time poking fun at it.

Tonight, all of the major news outlets are running the same old stories about who the President is tweeting at today, followed by hard-hitting headlines about April the giraffe giving birth again, the potential for Russell Wilson to sign the biggest NFL contract in history, Lori Loughlin losing out on deals with Netflix and the Hallmark Channel, and Chris Hemsworth snapping selfies with wildlife in Australia.

You know, all the really important things.

But even if we’re laughably called a “flyover state” by a whole lot of people who have never even bothered to get a real glimpse of what Nebraska has to offer, there is absolutely no other place I’d rather be at a time like this. Because if there is one thing we Nebraskans are really great at, it’s facing adversity head-on and taking care of each other.

So yeah, we’re getting bitch-slapped by Mother Nature right now and most of the world isn’t even aware, but we’re standing up and pulling together and I have absolutely no doubt that we’re going to emerge from this stronger than ever. It’s just who we are. It’s just what we do. 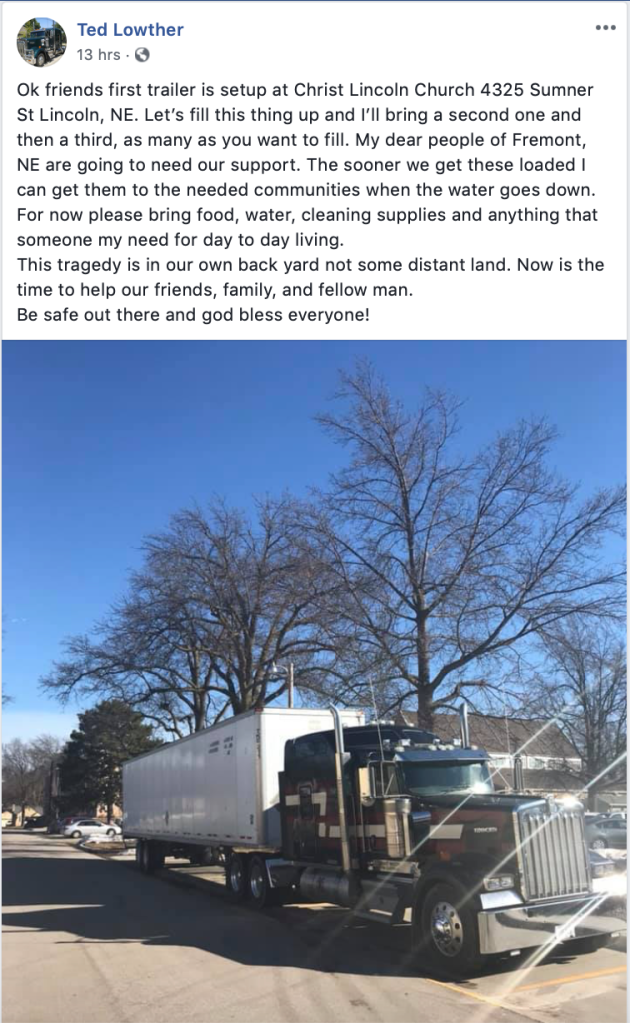 I don’t tend to be an ostrich sort–you know, one of those people who avoids conflict like the plague and generally tries to quickstep around any unpleasantness. I like to face things head on, tackle the problem.

Let it in and let it go. You know? 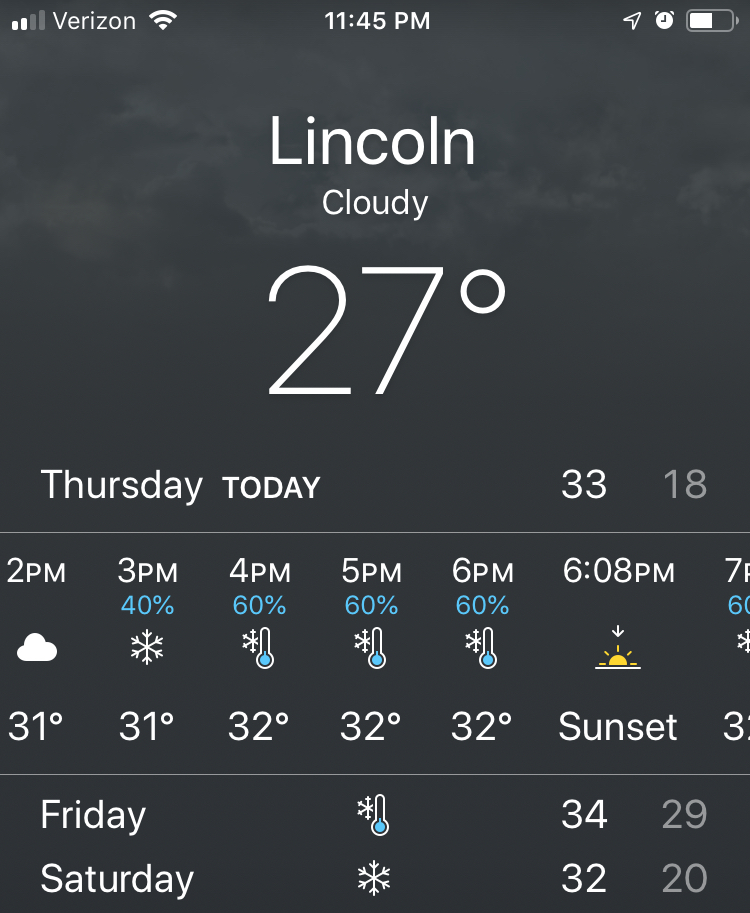 I just saw that we may be in for some freezing rain and another 2-8 inches of snow this weekend. I know. I know. We live in Nebraska and it’s February, but this has reached the point of ridiculousness.

Somebody, please make it stop. And until it does, I’m just going to do my best and try to ignore the fact that, if the weather in Nebraska is any indication, hell may have legitimately frozen over.

So, if you’re paying any attention at all to the weather here in the Midwest, you’ve likely heard that a Polar Vortex has settled over us. It’s Hoth cold out there folks, and we’re all bracing ourselves to see what unfolds. School closings and activity cancellations are pouring in. And there was a segment on tonight’s news to warn people of the dangers of frostbite and hypothermia.

The thing that alarmed me most?

I literally have every single one of those symptoms on a daily basis. Should I be concerned? Is there such a thing as chronic hypothermia? Or am I just getting old?

Looks like the frigid temperatures are catching up with Cosette. Apparently she dug through some bags of Cadence’s old clothes in the basement, and borrowed the scarf off a stuffed raccoon to make last night’s trip to report back to Santa.

I have to wonder…is it colder in Nebraska than the North Pole this week? 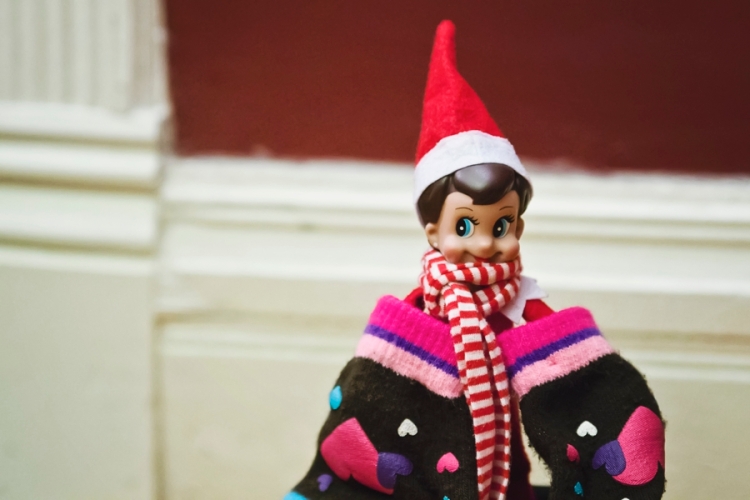 My favorite peeps in the whole wide world, out enjoying a walk now that the weather is finally cooperating. Now that is what a call a good day!

Well, yesterday may have been the first official day of spring, but it looks like winter isn’t giving up on us yet. After such a great afternoon spent playing outside and enjoying the sun and mild temperatures earlier this week, both Cadence and Electra had a hard time believing their eyes when they woke up this morning and saw the abrupt change in the weather…