I posted several months ago about my distaste for jelly. If you need to refresh your memory, or didn’t get a chance to read the post, click HERE. Ugh…jelly just makes my stomach turn.

Unfortunately, Steven has a bad habit of double-dipping the knife when he’s making himself a PB&J sandwich. If he was sticking a peanut butter covered spoon into his jar of jelly, I wouldn’t mind at all. Hell, I’m never going to eat the stuff, so why would it matter to me? But, that’s not always the case, and there have been several instances where I have gone to make myself a peanut butter sandwich only to find bits of jelly contaminating the peanut butter jar. Of course, Steven adamantly denies double-dipping, calls me crazy and otherwise dismisses my complaints as figments of a paranoid imagination.

Today, we decided to have sandwiches for lunch. The minute I opened the jar and saw this, I grabbed the camera to record the evidence. You be the judge… 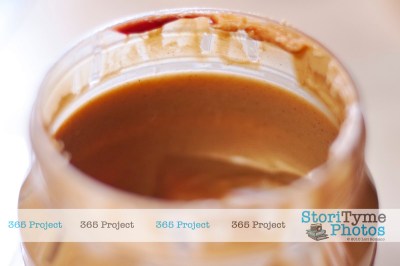 And just so there is no mistake, here is the jelly in question… 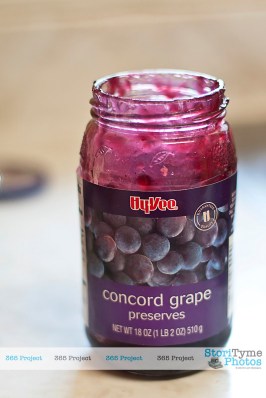 Like anyone accused of this sort of heinous crime, Steven defended his actions, saying, “Oh jeez! What’s the big deal? So there’s a little bit of jelly on the rim of the jar. It’s not like it’s actually in the peanut butter. I never get it in the peanut butter!”
I spent the next five minutes or so giving Steven a whoooooole long, drawn out spiel about how I couldn’t believe he even double dipped in the first place, and then didn’t expect to actually get caught. Of course, he continued to maintain his innocence and call me crazy while I carefully scooped peanut butter from the jar without touching the sticky glob of jelly on the rim and spread it onto a slice of bread.
Never get jelly in the peanut butter, eh? Then how do you explain this?

Today’s 365 Project entry is dedicated to dear, double-dipping husband. You, know, the first step to recovery is admitting you have a problem. 🙂